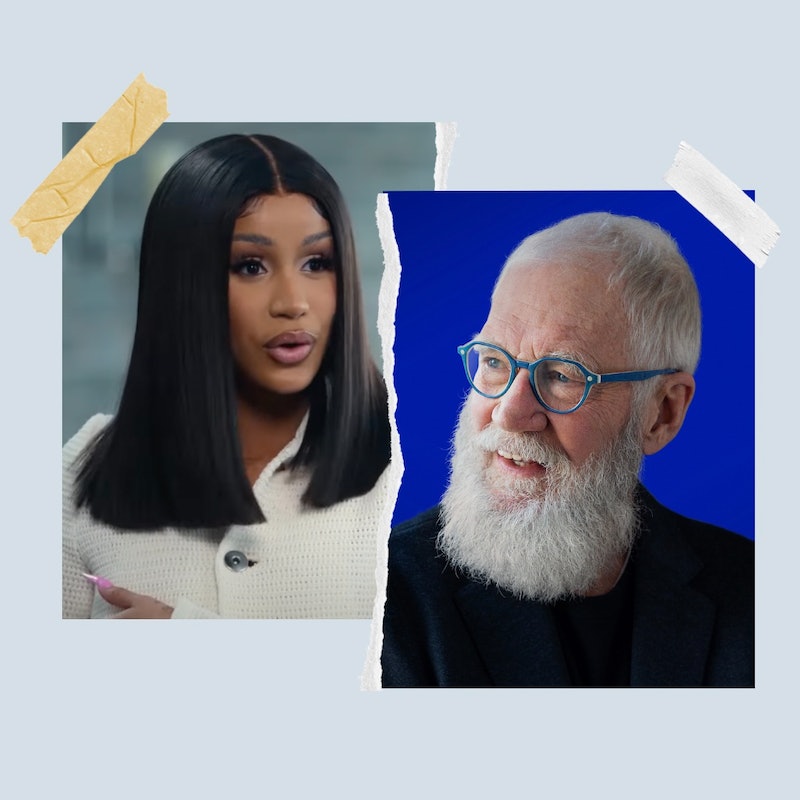 Cardi B has emerged as one of the most influential political voices of our generation, earning props from the likes of President Joe Biden and Senator Bernie Sanders — and equally becoming a huge target for conservative figures. Any backlash isn’t fazing her though. In an exclusive clip given to Bustle from the new season of My Next Guest Needs No Introduction with David Letterman, which starts streaming on Netflix on May 20, Cardi B explained why using her platform to speak out on political issues is so important to her.

Letterman praised the Grammy-winning rapper for her political activism and ability to not only change “the way people feel and think not only about themselves, but about the problems of the world at large.” Cardi told the legendary late night host that she rarely inserts political things in her music or lyrics, but she still “uses the f*ck out of my platform,” as routinely exhibited on Twitter and Instagram, “because you might think that people are not looking, but they are.”

And since Cardi also knows the likely reasons why people follow her every move, she wants to use her star power to divert their attention to more social issues. “I mean, I’m a hood chick, and I’m from the Bronx,” she explained. “A lot of people relate to me and follow me because they want to see how I’m dressed, they want to see my lifestyle. So I feel like I have a responsibility to also share to them like, ‘Hey, while you here and you’re checking my outfit and checking my music, check out what’s going on over here in this part of the world.’”

In the lead-up to the 2020 presidential election, Cardi interviewed then-candidate Biden for Elle, in which she made it clear what she expected from him in the White House. The rapper advocated for many of the key points of Sanders’ progressive platform, including Medicare for All, and stressed the importance ending police brutality in light of the killings of Breonna Taylor and George Floyd. “I want Black people to stop getting killed and no justice for it. I’m tired of it. I’m sick of it,” she said. “I just want laws that are fair to Black citizens and fair to cops too.” Biden agreed with most of her points, adding, “There’s no reason why we can’t have all of that.”

More like this
Julie Andrews Revealed A Surprising Behind-The-Scenes 'Bridgerton' Detail
By Grace Wehniainen
Who Is 'Umbrella Academy' Star Elliot Page Dating After His Divorce?
By Jake Viswanath
Dan Levy’s Father’s Day Pic Of Dad Eugene Spoofs The ‘Schitt’s Creek’ Vet’s Past
By Grace Wehniainen
‘Bridgerton’ Stars Nicola Coughlan & Luke Newton Got Polin Fans In A Tizzy
By Stephanie Topacio Long
Get Even More From Bustle — Sign Up For The Newsletter