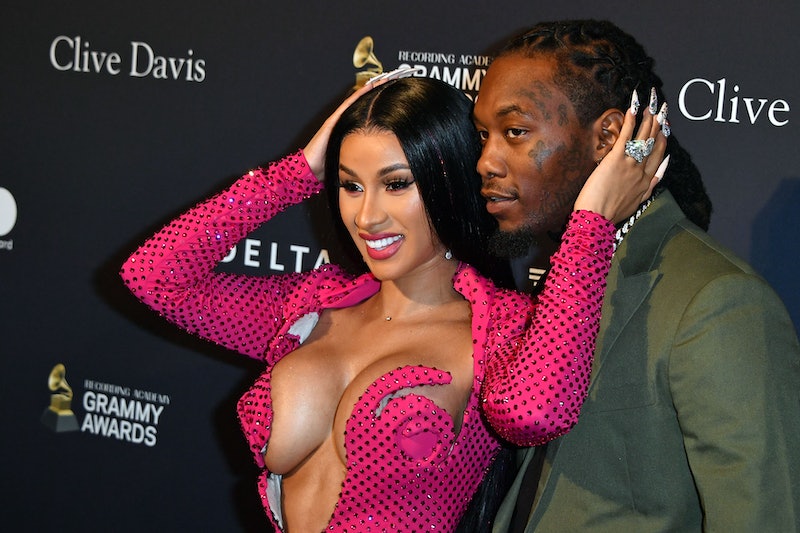 Cardi B may have decided to end her marriage, but the rapper doesn't have any ill will towards her ex-husband. In response to a fan who told her they wanted to "drag" the Migos rapper, Cardi B told her fans not to "disrespect" Offset after their divorce, pointing out that he is still the father of her child, 2-year-old Kulture. When someone wrote that the fans "don't like Offset" and as such, "it's our right to drag him when we see fit," Cardi shut them down in a since-deleted post on Twitter.

"I don't give a f*ck if you don't like him," the rapper wrote, as reported by People. "I don't talk to him but you not going to disrespect my child father. I will slap the sh*t out of you in courtesy of Kulture." Cardi also pointed out that it was important to her to maintain a good relationship with Offset for the sake of their daughter — regardless of how her fans feel about it. "If he die, go broke, you not the one that's going to raise my kid & you not the 1 who pays for her sh*t."

Since filing for divorce from Offset on Sep. 15, Cardi has done her best to set the record straight about the split and her feelings surrounding her ex-husband. During an Instagram Live on Sep. 18, she explained that new rumors of Offset's infidelities were untrue, and that she ultimately decided to end things because she was "tired of arguing" with the rapper all the time. "The reason for my divorce is not because of none of that sh*t that ever happened before. It’s not because of cheating," she told fans, calling rumors that Offset is expecting a baby with another woman "a complete lie."

"I got tired of not seeing things eye to eye," Cardi continued, explaining that she and Offset were just not happy together anymore. "When you feel like it’s just not the same anymore, before you actually get cheated on, I’d rather just leave. Nothing crazy, out-of-this-world happened, sometimes people really do grow apart. ... sometimes you’re just tired of the arguments and the build up. You get tired sometimes and before something happens, you leave."

A few days later, Cardi once again refuted rumors that Offset was unfaithful in another Instagram Live, telling fans that the stories originated on "blogs" that were trying to make her look bad. "That is why I be telling y'all to stop believing... what people be saying, these blogs are saying, especially blogs that have a certain type of hatred towards me," she said. The rapper also slammed people who thought she had decided to file for divorce as a "publicity" stunt, insisting that she would not want to hurt Offset or his family by airing out their problems in public.

Cardi has frequently had to defend Offset from fans' attacks over the course of their very tumultuous relationship. "When me and my husband got into our issues — you know, he cheated and everything — and I decided to stay with him and work together with him, a lot of people were so mad at me; a lot of women felt disappointed in me," Cardi explained during a January 2020 interview with Vogue. "But it’s real-life sh*t. ... "Everybody has issues. I believe in forgiveness. I prayed on it. He has my back for everything, I have his back for everything ... We have come to a clear understanding."

More like this
Jameela Jamil Defends Sam Smith After Trolls Body-Shamed Them
By Jake Viswanath
Meghan Trainor & Daryl Sabara Are Expecting Their Second Baby
By Jake Viswanath
Adam Levine & Behati Prinsloo Welcome Their Third Child Together
By Jake Viswanath
Hilary Duff's Husband Matthew Koma Has Her Name Tattooed On His Butt
By Jake Viswanath and Stephanie Downs
Get Even More From Bustle — Sign Up For The Newsletter
From hair trends to relationship advice, our daily newsletter has everything you need to sound like a person who’s on TikTok, even if you aren’t.