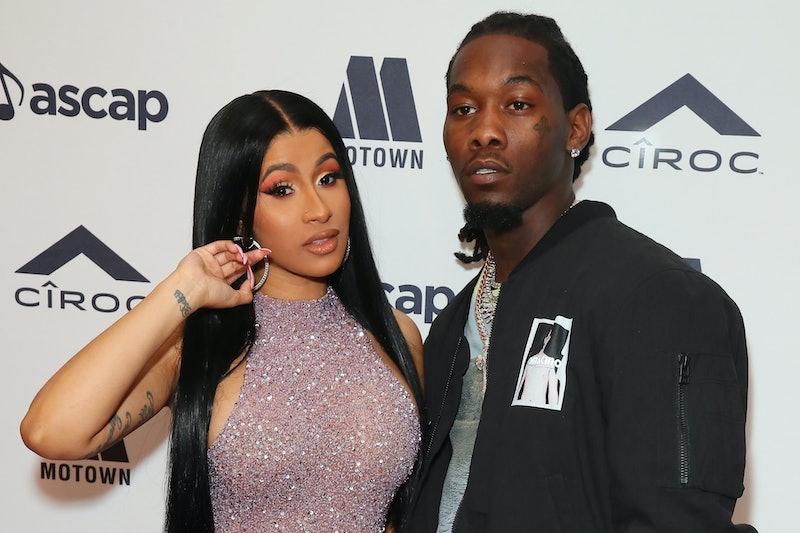 Don't believe everything you read about Cardi B. While speaking with fans during a very candid Instagram Live on September 21, Cardi B refuted multiple rumors about her divorce from Offset — namely, the reports that the Migos rapper was unfaithful and had fathered a child with another woman, resulting in their split. Cardi filed for divorce from Offset after three years of marriage on Sep. 15. And in the week since the news broke, she has repeatedly denied that her decision was due to her husband's alleged infidelity, and claimed during her recent Instagram Live that the rumors originated on "blogs" written by people who dislike her.

"People were just flooding me with... 'Oh, Offset got a girl pregnant,'" Cardi explained, before saying that she thought those blogs were "where the sh*t came from. Ain't that about a bitch." The rapper then cautioned her followers against believing everything they read about her online. "That is why I be telling y'all to stop believing... what people be saying, these blogs are saying, especially blogs that have a certain type of hatred towards me," she said.

In addition to denying that Offset was unfaithful, Cardi also slammed other "bullsh*t" reports that she had decided to file for divorce as a publicity stunt, in order to promote her music. "Another blogger claims that I am getting a divorce for attention. And it's like, you think I'm going to pay a lawyer 20 thousand f*cking dollars [for attention]?"

More importantly, Cardi explained, she wouldn't want to put Offset — or his family — through the experience of a public split just for her own gain. "I get along with his mother very well. You think I'm gonna do that to her son for attention," the "WAP" rapper continued. "Why do I need attention? You don't see I have millions of f*cking followers? Do you see that I have the number one song in the f*cking world? Why do I need attention? Why do I need stunts?"

This is the second time that Cardi had publicly addressed her decision to file for divorce from the Migos rapper in the span of just a few days. On Sep. 19, the rapper explained in a different Instagram Live that she ultimately decided to end things with Offset because she was "tired of arguing" and felt it was the best decision for them and their 2-year-old daughter, Kulture. "I got tired of not seeing things eye to eye," Cardi — explained. "When you feel like it’s just not the same anymore, before you actually get cheated on, I’d rather just leave. Nothing crazy, out-of-this-world happened, sometimes people really do grow apart. ... sometimes you’re just tired of the arguments and the build up. You get tired sometimes and before something happens, you leave."

Since they first began dating in February 2017, Cardi and Offset's relationship has had plenty of public ups and downs. In early 2018, following rumors of Offset's alleged infidelities, Cardi defended her decision to stay with the Migos rapper on social media, explaining that while it was "not right" for him to cheat, "this sh*t happens to everyone." They welcomed daughter Kulture in June 2018, but briefly split by the end of the year, following even more reports that Offset had allegedly been unfaithful, before ultimately reconciling once more in January 2019.

"Everybody has issues. I believe in forgiveness. I prayed on it," Cardi told Vogue in January 2020, explaining that she and Offset had "reached an understanding" and decided to work through their issues. "He has my back for everything, I have his back for everything ... We have come to a clear understanding. For me, monogamy is the only way. I’ll beat your ass if you cheat on me."

More like this
Kanye Joked About His Divorce To Kim K In A Surprise Speech At The BET Awards
By Alyssa Lapid
Justin & Hailey Bieber's Bond Is "Unbreakable" Amid His Ramsay Hunt Diagnosis
By Bustle Editors
Sadie Sink Would Escape Vecna From 'Stranger Things' With This Taylor Swift Song
By Grace Wehniainen
What Is Ariana Grande's Net Worth? When It Comes To Money, She Has No “Problem”
By Hugh McIntyre
Get Even More From Bustle — Sign Up For The Newsletter