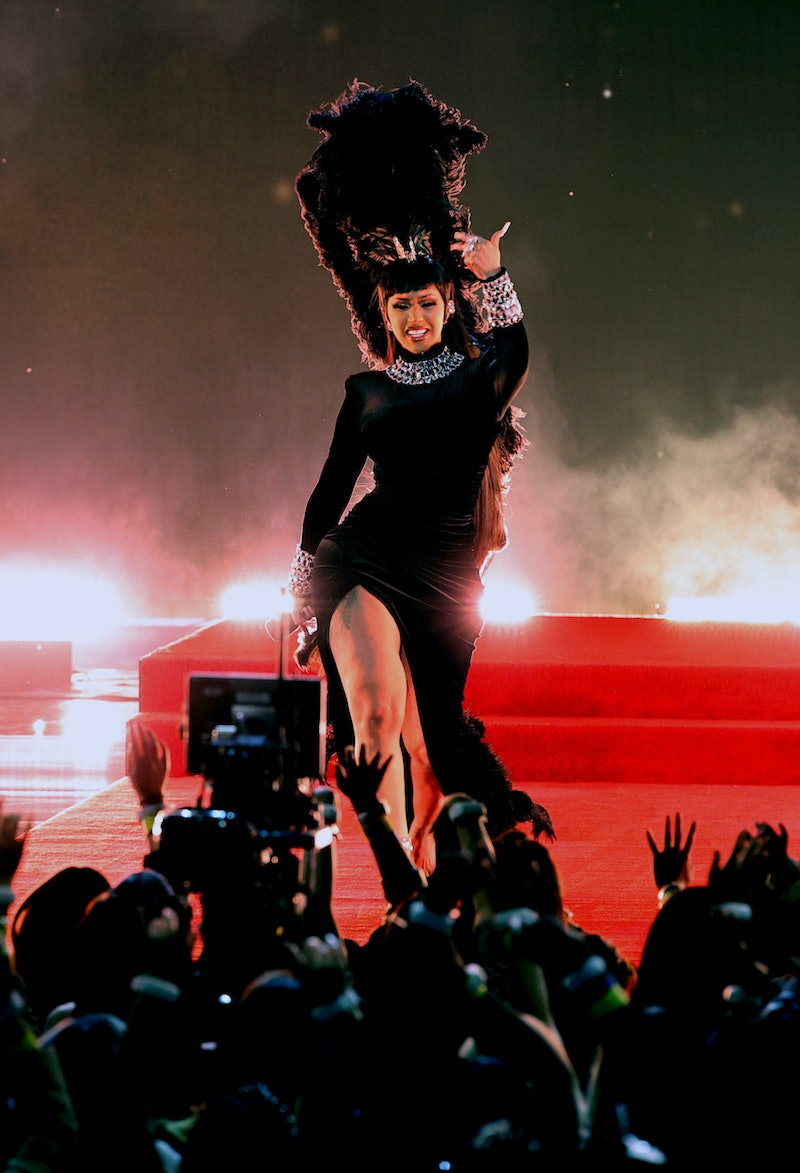 Cardi stans rejoice: the “WAP” rapper finally dropped new music and she brought in some big names to usher in her Cardissance with “Hot Shit” featuring Kanye West and Lil Durk.

Since the “Bodak Yellow” rapper burst onto the music scene with 2018’s Invasion of Privacy, which debuted at number 1, Cardi B has been catapulted to fame conquering the realms of music, fashion, Hollywood, and motherhood. She won a Grammy for Best Rap Album, starred in Hustlers alongside Jennifer Lopez, and became a Balenciaga ambassador. She’s also become somewhat of a political activist. And even gave birth. Twice. So it’s totally understandable that there have been delays in her hit-making process — not that that’s stopped her fans from begging for more music.

Finally, during the commercials at the BET Awards, Cardi teased that she’s releasing a new single. And on June 27, she followed up with another bombshell teaser and named her collaborators. On July 1, “Hot Shit” finally dropped and it’ll be part of the highly-anticipated second studio-length album, which will also house 2021’s “Up” and “WAP.”

Per Complex, the rapper joined a Twitter Spaces held by her fans and shared details about the “very masculine” new single, including just how long she’s been sitting on the track. “I have this record already for almost three years. I think this record is actually older than ‘WAP.’ It is everyone’s favorite,” she said.

She also waxed poetic about her collaborators and their verses. In an interview with Apple’s New Music Daily Radio with Zane Lowe, the rapper spoke about working with Ye. “Kanye gave me this verse a couple of months ago when he was just all over the media, because of all of the things that were going on,” Cardi said. Calling the verse “personal but not that personal,” she said she’s “so happy” West gave her the verse.

Cardi also spoke about how Ye is “such an amazing, sweet person.” “I had a lot of conversations with Kanye West. I learned so much about him,” she said. “I’ve been feeling like, I wish a lot of people have conversations with him so they could just see the real … the him.” Speaking about West’s sometimes controversial beliefs, she said, “It’s almost like a persona, but kind of not.” She continued, “Let’s say if he believes in something, right? And you’ll be like, ‘Do you really believe in this? ... But he got his reasons why he believe in it. And when he give you his reasons, you’ll be like, ‘Oh, okay. That does make sense. I get it.’”

“I feel like Durk verse is really street,” she said about Durk’s verse, which he sent within a day of being asked. “I see almost Bronx kids listening to his verse. And then when Kanye verse come in, you see people that are more into that money, into that grown sh*t.”

“Hot Shit” almost wasn’t released though. In an Instagram Live, Cardi explained that she was supposed to cancel the release because it didn’t have a music video. The track remains video-less (at least for now).

She echoed these sentiments to Lowe. “Right after this record, I have another one that is different from this record,” she said. “And right after that, I really just want to put that album together. I’m just trying to put all my plans together and everything together ... I’m ready to go on beast mode.”

More like this
Are John Legend & Kanye West Still Friends? The Singer’s Latest Update Is Candid
By Brad Witter
Kanye West Has The Most Kanye Reaction To Kim Kardashian & Pete Davidson's Split
By Jake Viswanath
Demi Lovato Said Her Dream Music Collaboration Is Hayley Williams
By Grace Wehniainen
Megan The Stallion’s “Anxiety” Song Shouts Out Britney Spears & Whitney Houston
By Grace Wehniainen
Get Even More From Bustle — Sign Up For The Newsletter