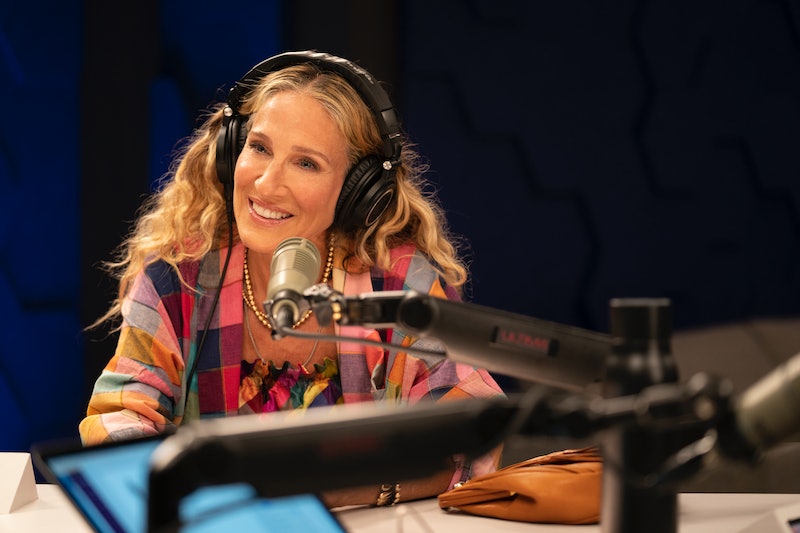 Spoilers ahead for And Just Like That... From Big’s death to Samantha’s move abroad, the Sex and the City reboot wasted no time dishing out dramatic changes to its leading ladies’ lives. Now, Episode 4 brings us another revelation, and — well, it’s not quite as big as either of those earlier upheavals, but it’s a fun detail to keep in mind for your Sex and the City trivia night.

As Carrie spends time in her neighborhood from a past life (her and Big’s home is on the market), she pops into an old haunt for a cup of coffee. Here, she catches up with the shopkeeper, Mr. Kouimelis, whom she hasn’t seen much since she got married — and who refers to her as Caroline. She doesn’t mind, so it seems pretty clear Mr. Kouimelis has been calling Carrie “Caroline” forever. But is that really her name?

As Today reports, Caroline has been listed as Carrie’s official name on Wikipedia for some time. Not that the website’s the be-all, end-all of TV canon, of course, but still — someone found the name legit enough to include in Carrie’s open-source life story. It makes enough sense that no one would likely ever question it. Carrie’s HBO biography still knows her as only Carrie, though, so the only way to know if Carrie is, indeed, Caroline, is to rewatch the entire series and scan for a mention of the name. Maybe on some official document, like a credit card bill? (Hey, it’s a daunting task, but just in case you were looking for a holiday season rabbit hole to go down...)

The other, very real possibility? Carrie is still Carrie! If you have a legal name that is also a common nickname (e.g., Carrie for Caroline or Carolina), you might be used to people wondering, what’s that short for? And sometimes, the answer is nothing — maybe your name is just your name, just like Carrie’s “real” name could be, well, Carrie. Mr. Kouimelis wouldn’t be the first person to affectionately address someone by a longer form of their name. Or just get it wrong altogether, but you’re not bothered enough to correct them.

More like this
The 8 Best Aidan Shaw Moments On 'Sex And The City'
By Grace Wehniainen
A New 'And Just Like That' Table Read Pic Confirms A Key Character's Return
By Jack Irvin and Grace Wehniainen
All The ’70s Easter Eggs You Missed In 'That ’90s Show'
By Grace Wehniainen
At 28, Debra Jo Rupp Was Living A Much Different '70s Show
By Grace Wehniainen
Get Even More From Bustle — Sign Up For The Newsletter
From hair trends to relationship advice, our daily newsletter has everything you need to sound like a person who’s on TikTok, even if you aren’t.