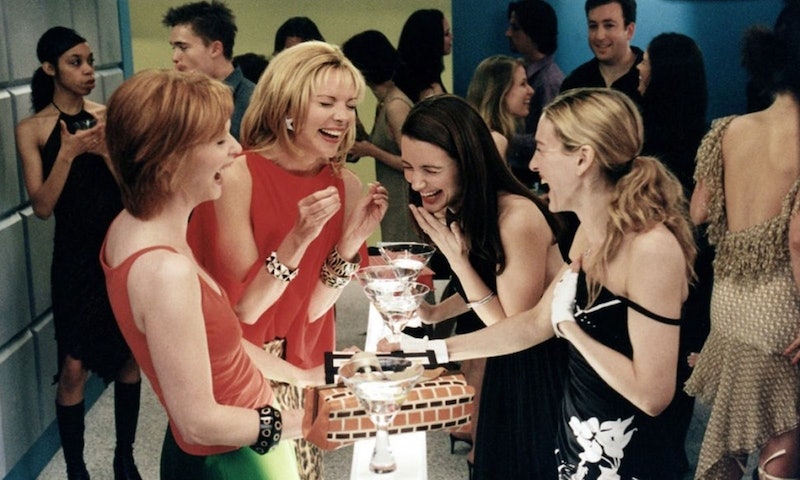 There was a time when Sex and the City’s Carrie Bradshaw was the epitome of New York glamour. She partied at the best clubs, wore exclusively designer shoes, and had a stalwart crew of ladies who brunched. Played by Sarah Jessica Parker, New York City’s resident “sexual anthropologist” (her words) was a weekly sex columnist who often used her and her friends’ exploits as fodder for her writing.

Based on the namesake novel by Candace Bushnell, the HBO series, which aired for six seasons from 1998 to 2004, followed Carrie and her foursome of girlfriends, lawyer Miranda Hobbes (Cynthia Nixon), art dealer Charlotte York (Kristin Davis), and PR executive Samantha Jones (Kim Cattrall). A massive hit, SATC earned 54 Emmy and 24 Golden Globe nominations, among others, and was a favored stop of celebrities, including guest stars Jon Bon Jovi, Justin Theroux, and Hugh Hefner. A reboot (sans Cattrall), And Just Like That, has finally arrived, and it’ll definitely remind you of how complicated these characters were.

The pilot episode of the original series, titled after the show, follows Carrie as she researches for an article about women having sex like men, which she defines as one-sided and with zero feelings. Her research involves talking it out with the ladies before testing the theory out for herself. The episode also introduces Carrie’s notorious on-again, off-again love interest, Mr. Big (Chris Noth). Here’s everything I noticed rewatching Sex and the City 23 years later, including all the infuriating things about its heroine.

The Theme Music Is Still Iconic

That intro still brings out all the nostalgic feels. And Carrie’s pink tank and tutu skirt ensemble? Still great.

There Was Another Term For Ghosting

The series opens with an anecdote of Carrie’s friend’s love life. Elizabeth, a journalist, moves from London and falls in “love at first sight” with an investment banker. They become inseparable for two weeks — snuggling, going on dates, and viewing a townhouse together (fast much?). She’s elated after he asks her to meet his parents for lunch. Come meeting day, he “rainchecks” and disappears for the next two weeks before a livid Liz calls him to end their dalliance.

Carrie says she knows the experience all too well, calling it the “end of love in Manhattan” and “the age of un-innocence.” Well, Carrie, let us introduce you to a 21st-century term called ghosting. Unfortunately, these disappearing acts have stood the test of time. Different nomenclature, but same modus.

Throughout the episode — and the series — there’s an uncomfortable obsession with being unwed. Carrie says, “There are thousands of women like this in the city ... and we all agree they’re great ... And they’re alone,” like it’s a bad thing.

In fact, Carrie introduces her column as a way of examining these “issues,” particularly why there are “so many great unmarried women and no great unmarried men” or what she calls “the riddle of the sphinx.” The mystery being: If you’re so great, travel a lot, and can afford $400 Manolo Blahniks, why can’t you find a husband? For a show supposedly about celebrating independence, Carrie doesn’t seem to like the title of “unmarried woman,” peddling the myth that there’s something wrong with that.

On top of that, Charlotte’s narrative arc is dedicated to finding a husband. She even gets hyper-strategic about bagging one throughout the series — from hanging out with married couples who introduce her to eligible bachelors to following arbitrary rules about what makes a woman “marriage material.” Remember her “men don’t marry the up-the-butt girl” edict?

The First Few Minutes Are Enraging

When Carrie interviews friends for her column of the week titled “Unmarried Women, Toxic Bachelors,” the men praise what they call a “mid-30s power flip,” where after women hit 35, “the guys hold all the chips.” Others add that “these women should just forget about marriage” and wonder, “Why don’t these women just marry a fat guy?”

If you expect women to flip the script afterward, you’d be disappointed. Miranda then shares an anecdote about a woman who turned 41 who could no longer get dates and “had a mental breakdown.” Charlotte, meanwhile, advises women to “keep your mouth shut and play by the rules.” Supposedly strong empowered women said what now?

OK, maybe not Zoom, but a conference call. When the foursome celebrates Miranda’s birthday over dinner, Carrie narrates it as “another 30-something birthday with a group of unmarried female friends. We would all have preferred a nice celebratory conference call.”

Carrie, take it from someone from the pandemic-stricken future who’s had to endure only conference call birthdays via Zoom: You don’t.

Second, are you implying you didn’t want to hang out IRL because you’re all... unmarried? Or do you just not want to be burdened with showing up for your BEST FRIEND on her special day? Answer quickly!

Samatha urges her friends to “have sex like a man” and talks about her exploits with a man she calls the “sex god,” saying they had a great time but forgot about him afterward. Charlotte responds with, “Are you sure it’s just ’cause he didn’t call you?”

Then when Miranda agrees and says she just wants sex sans the relationship, Carrie brushes it off by saying she’s certain that when the “right guy comes along,” they’ll change their minds. Not everyone wants to be in a committed relationship — or married or with kids. Carrie and Charlotte invalidating their friends’ views seems like a toxic friendship.

Carrie is out with Stanford (Willie Garson) when she bumps into Kurt (Bill Sage), aka her three-time “mistake.” Stanford implores her not to do anything with Kurt since he’s had to pick up the pieces every time Kurt left. Carrie responds by saying she’s not a masochist and that “the guy is scum” before giddily hopping over to say hi and invite him to hook up.

I couldn’t help but wonder, is New York’s dating scene really toxic, or is it just Carrie?

Inspired by this new philosophy of “having sex like a man,” which she believes is the way for women to take back power in the bedroom, she immediately employs it during her rendezvous with “scum” Kurt, all in the name of “research.” She abruptly leaves after he satisfies her, deliberately leaving him unsatisfied and confused.

It’s not that empowered to agree — nay, invite — someone to hook up without talking out what you want, especially if your plan is to bolt after one-sided action. And to feel so good and smug about it after. It’s selfish.

Carrie’s Question To Skipper Is Insensitive

When Skipper (Ben Weber) laments about his year-long sexual drought because “he’s too nice” to his friend Carrie, instead of being supportive, she insensitively jokes, “Are you sure you’re not gay?”

Carrie’s Set Up Is Mean

She then sets Skipper up with Miranda before narrating, “I know she’s gonna hate Skipper and think he was an asshole, the way she decided that all men were assholes.” Does she secretly hate Miranda?

During their date, Carrie, who’s in the same club, says she’s going to “rescue Skipper” before getting interrupted. Again, Miranda is Carrie’s best friend, and yet it’s Skipper she’s rescuing? Carrie, what is the end game here?

Charlotte is even more determined to end up married than Carrie, so when Capote Duncan (Jeffrey Nordling) invites her on a date, naturally, she calls Carrie and cancels on her friends last minute.

Carrie Is Also A Jerk To Samantha

When Carrie and Samantha spot Big at a club, Samantha tells her that Big is notorious for only dating models before adding, “I’m as good-looking as a model. Plus, I own my own business.”

Carrie then tells the audience that Samantha, her friend, has a “deluded self-confidence.” Has Carrie never heard of hyping up her friends? Does she not think Samantha is a catch? Why does she hang out with people she doesn’t seem to like? Seek help.

The Charlotte Versus Samantha Portrayal Is Unsettling

Charlotte’s date with Capote doesn’t go well. Despite being determined to “play hard to get” (a must in her Getting Married rulebook), she agrees to go to his place to look at a painting and kiss a little because she was afraid leaving him and dry would make him, well, bolt. Thinking she played her cards right, she leaves before Capote hops beside her in a cab to head to a bar because though he says he respects her, he “really needs to have sex tonight.”

Later on, it’s Samantha who ends up ogling Capote’s painting, a clearly overused move. While making out, though, he tells her, “I gotta get up really early so you can’t stay over.” Samantha, visibly disappointed, is forced to reply that she needs to wake up early too.

Throughout the series, Samantha is a beloved character. The “sex” in Sex and the City, Samantha is a strong independent woman who has the healthiest relationship with her sexuality. But this juxtaposition with Charlotte in the first episode seems to mimic a Madonna/Whore complex where Charlotte is the marriageable one and Samantha gets the shorter end of the stick. Is Samantha actually empowered or not? Why did they do Samantha dirty?

The Interactions With Big Are Cringe-Worthy

Admittedly, it’s easy to root for Carrie and Big throughout the series, especially on the first watch. But with time, fans realized that Big had major commitment issues, and they really were toxic together.

When they first meet, someone bumps into Carrie, sending her stuff flying out of her purse. Big then stops to help and hands Carrie her stash of condoms. The episode then ends when Big spots Carrie walking home and gives her a lift. When she tells him all about her article, he condescendingly tells her she’s obviously never been in love. (This remark “knocks the wind out” of her chest.) After she’s dropped off in the Upper East Side (how she can afford rent on the salary of a weekly columnist is unknown), she runs back to his car to ask, “Have you ever been in love?” And he responds with, “Absofuckinglutely.” How is this the romance that sustained viewers for years?

More like this
'Friends' Star Maggie Wheeler Offers Support To Matthew Perry After Reading His Memoir
By Alyssa Lapid
The 'Scream 6' Trailer Shows Off Hayden Panettiere's Return & Ghostface In NYC
By Jack Irvin and Jake Viswanath
'That '90s Show' Star Callie Haverda Got Advice From Mila Kunis & Ashton Kutcher
By Brad Witter
Netflix Shut Down 'Bridgerton' S3 Rumours About A “Very Dark” Storyline
By Bustle
Get Even More From Bustle — Sign Up For The Newsletter
From hair trends to relationship advice, our daily newsletter has everything you need to sound like a person who’s on TikTok, even if you aren’t.