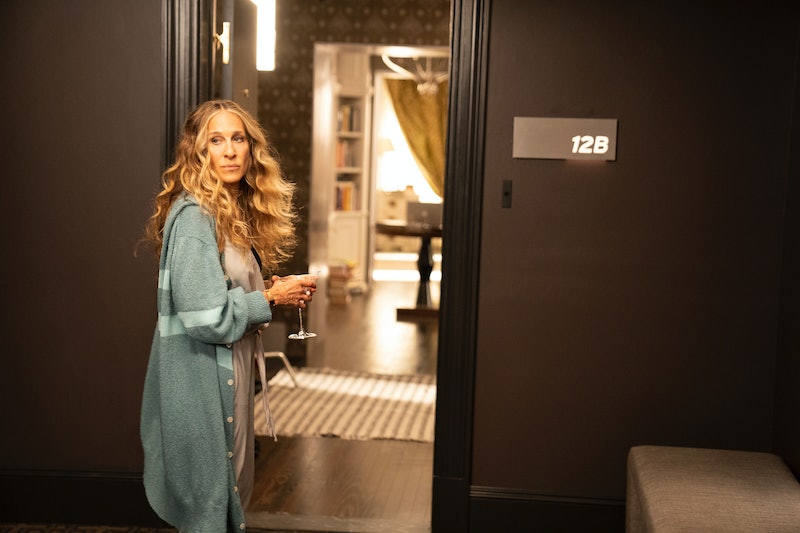 Major spoilers ahead for And Just Like That... Peloton doing damage control is practically a holiday season tradition at this point. But this time, the stationary bike company isn’t defending another creepy commercial. In fact, the controversy isn’t even about anything that Peloton actually did. As you’ve probably already seen (and maybe cried or scratched your head about), Mr. Big dies in the Sex and the City reboot after riding his Peloton. It was a sudden, heartbreaking moment that confirmed this series wouldn’t be the rose-colored nostalgia trip many viewers thought or hoped it would be. As Carrie and co. grapple with grief and logistics of planning a funeral — then, a way forward — Big’s death is already having a real-world impact on Peloton.

According to CNBC, Peloton’s shares fell by 11.35% Thursday, Dec. 9, the same day And Just Like That... premiered. Prices were at a 52-week low, too, proving that Big’s fictional heart attack stirred up unease in the finance world. (As of publication on Dec. 10, Peloton’s stock sits at $37.67, about $3 lower than Thursday’s numbers.) Peloton didn’t wait long before responding to the controversial plot twist, releasing a statement to the Los Angeles Times that afternoon (ostensibly with the hopes that you don’t remove a Peloton from your Christmas list). In her statement, Dr. Suzanne Steinbaum, a preventative cardiologist and Peloton health and wellness advisory council member, even touched on a bit of SATC lore to defend the brand’s name and assuage worried riders.

“I’m sure SATC fans, like me, are saddened by the news that Mr. Big dies of a heart attack,” Steinbaum said. “Mr. Big lived what many would call an extravagant lifestyle — including cocktails, cigars, and big steaks — and was at serious risk as he had a previous cardiac event in Season 6. These lifestyle choices and perhaps even his family history, which often is a significant factor, were the likely cause of his death. Riding his Peloton Bike may have even helped delay his cardiac event.”

“More than 80% of all cardiac-related deaths are preventable through lifestyle, diet and exercise modifications,” she continued. “And while 25% of heart attacks each year are in patients who already had one (like Mr. Big), even then they are very, very treatable ... It’s always important to talk to your doctor, get tested, and have a healthy prevention strategy. The good news is Peloton helps you track heart rate while you ride, so you can do it safely.”

But, um, did Peloton see this coming? An actual instructor appeared in the episode, so you’d think the company was somewhat involved. Per BuzzFeed News, the company was informed of the Peloton references, but not the tragic turn. “Peloton was aware that a Bike would be used in the episode and that Jess King would be portraying a fictional Peloton instructor,” but “due to confidentiality reasons, HBO did not disclose the larger context surrounding the scene to Peloton in advance.”

As viewers wait to see how Carrie deals with this shocking loss, there’s just one big question left: How long until Peloton spoofer Ryan Reynolds cashes in on this whole fiasco?