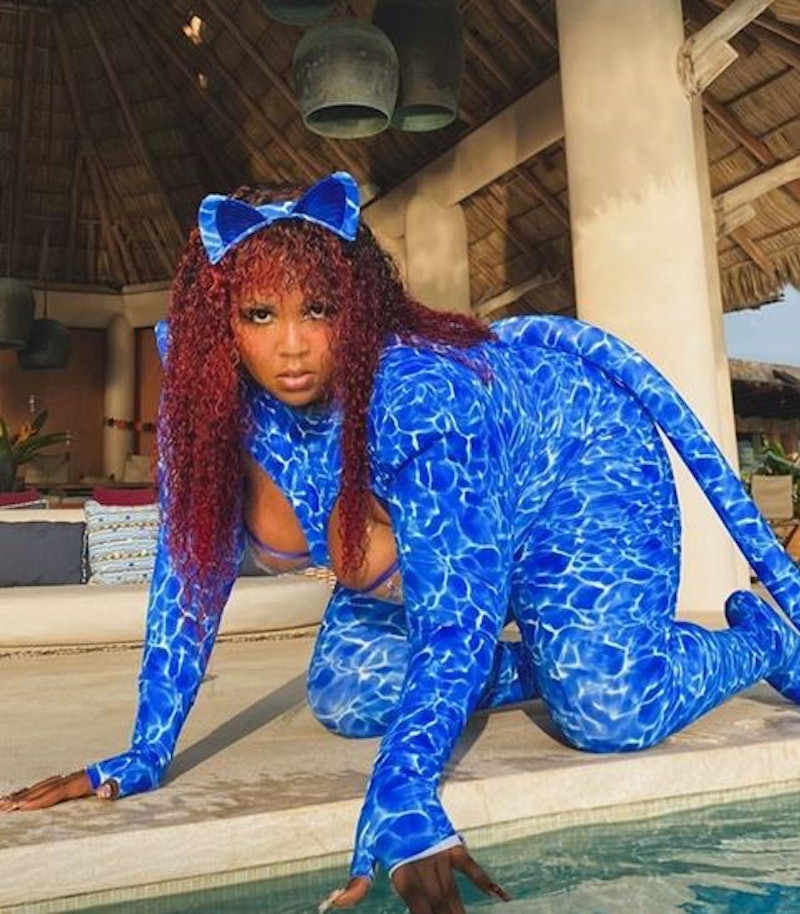 In an atypical year, Oct. 31 still brought thrills. The best celebrity Halloween costumes of 2020 were as amazing ever, with celebrities like Lizzo, Chrissy Teigen, Ciara, and the Kardashian-Jenner family keeping the bar high. As Camila Cabello tweeted, “Halloween spirit is never canceled.”

With the ongoing coronavirus pandemic looming over Halloween, people found ways to adapt. The masks on display weren’t all for show — some were purely for protection. Gabrielle Union and Dwyane Wade masked up as they took their family s’more costume to the street. Plus, other celebs had to figure out how to get ready without their usual help. Demi Lovato was “high key proud” after putting together her intense vampire look without “access to a full glam squad.”

Two standouts from this year are Lizzo and Tabria Majors. Lizzo had not one but two creative costumes: First, she was “Flyyyyy AF” as the fly from VP Mike Pence’s head in the vice presidential debate, and then she came up with a clever “WAP” outfit. Majors’ costume wasn’t as unique — she dressed as Beyoncé — but her execution really set her apart when she recreated some of the music icon’s best moments.

Yep, the musician’s fly AF as the debate-crashing insect.

Seriously, the commitment to filling Beyoncé’s shoes is magic.

Instead of choosing a couple’s costume, Teigen and Legend went their own ways, with the model as a ballerina and the musician as Spider-Man.

It turns out The Rock was too big for his Mufasa costume, but he did his best to make it work.

Ciara Gets Help With Her Looks

Ciara’s Cardi B look had the rapper “so hype,” and it didn’t hurt that her son Future dressed as Offset. Ciara also dressed as Janet Jackson, with husband Russell Wilson joining in as Busta Rhymes.

Cardi B Turns To Mythology

Cardi chose to dress up as Medusa with a snake body and snake hair.

Shawn Mendes And Camila Cabello Get Into The “Halloween Spirit”

Mendes went as a beat-up version of himself, while Cabello was a “Miami witch.” She wrote on Instagram that “Belinda’s superpowers are in her Chancletas.”

The rapper’s tribute to Nicki Minaj was perfectly extra.

Kris Jenner Is The King Of Halloween Town

The Kardashian-Jenner matriarch made a great Jack Skellington from The Nightmare Before Christmas.

Chris Colfer Knows Masks Are A Must

It was masks on masks for the Glee alum and his crew.

Gigi Hadid Is Straight Out Of A Video Game

The model chose her player while she celebrated with Zayn Malik and their newborn daughter. She even shared their first family photo.

The family costume is a sweet treat.

The family coordinated colors, if not costumes.

Kardashian’s black bodysuit made for an easy but cute performer outfit.

JGL did not skimp on leopard-print.

Hadid had herself turned into a Lichtenstein painting, per the UK’s Cosmopolitan.

Kevin Jonas Is Amid (Mostly) Minions

Kevin and Danielle Jonas went with a Minions theme, but one of their daughters was a fairy and the other a minion-fairy hybrid.

The Power Rangers teamed up for Halloween.

The singer had a Paris Hilton to accompany her Kim Kardashian.

More like this
Courteney Cox & Laura Dern Proved Their BFF Status With Matching Tattoos
By El Hunt
The 2023 Super Bowl Commercials Feature A 'Breaking Bad' Reunion & Missy Elliott
By Alyssa Lapid
We’ve Entered The Hot Boy Reader Era
By Samantha Leach
4 Surprising Celeb Throuples That Got The Internet Talking
By Sophie McEvoy
Get Even More From Bustle — Sign Up For The Newsletter
From hair trends to relationship advice, our daily newsletter has everything you need to sound like a person who’s on TikTok, even if you aren’t.