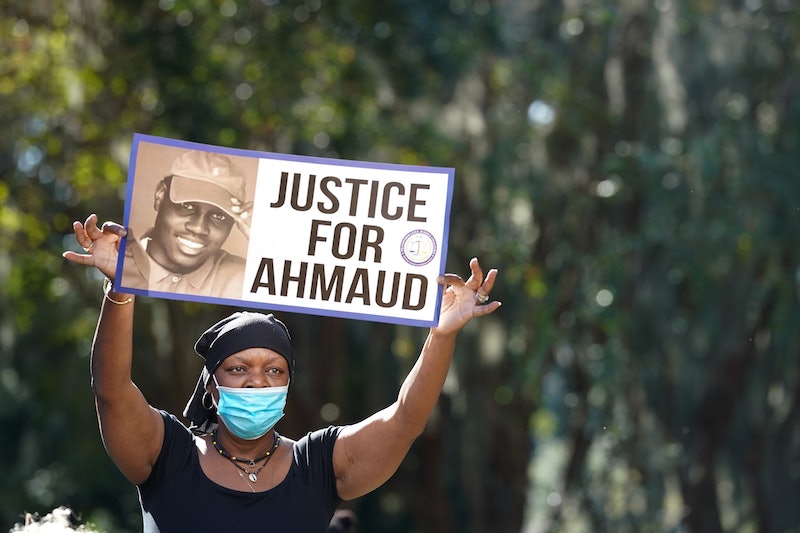 All three men charged in the 2020 killing of 25-year-old Ahmaud Arbery were found guilty on multiple counts of murder, a jury decided on Nov. 24 in Glynn County, Georgia. Arbery, an unarmed Black man, was shot multiple times while jogging in a tragedy caught on video, which spread online and became a crucial moment in the Black Lives Matter movement. Following the guilty verdicts a day before Thanksgiving, Arbery’s mother, President Joe Biden, Viola Davis, Bernice King, and other celebrities shared their reactions via social media.

Arbery was out for a midday jog near Brunswick, Georgia, on Feb. 23, 2020 when the McMichaels began chasing him in a pickup truck, with Bryan following behind in a car. Travis fired the deathly shots at Arbery while Bryan took a video from his car before hitting Arbery with the vehicle. Despite lacking evidence, the trio initially claimed to have thought Arbery was breaking into a neighbor’s house, per Intelligencer. They told the authorities his death was the result of a citizen’s arrest gone wrong, which the police officers believed, allowing the men to leave without arresting them. Only local Georgia residents knew about the case for months, but once Bryan’s video surfaced online, it immediately went viral. Seen by many as a modern-day lynching, the video led to public outrage and protests across the country.

While many view the convictions as a victory toward justice for Arbery, the defendants’ time in court is far from over. All three men will be tried in February 2022 for the federal hate-crime charges connected to the murder, which include interference with rights and attempted kidnapping for the trio. Additionally, Travis and Gregory were each charged with one count each of “using, carrying, and brandishing a firearm during and in relation to a crime of violence,” with Travis also charged with discharging his firearm.

Ahmaud Arbery’s Mother Reacts: “He Will Now Rest In Peace”

Before the Nov. 23 verdict was announced, Arbery’s mother Wanda Cooper-Jones expressed trust in the jury to convict the three men, per The New York Times: “I’m very confident that they’ll make the right decision once they see all of the evidence.” After the court’s dismissal on Nov. 24, she told reporters: “To tell you the truth, I never saw this day back in 2020. I never thought this day would come, but God is good. Thank you — thank you for those who marched, those who prayed.” Of her son, she added, “He will now rest in peace.”

President Joe Biden Reacts: “Nothing Can Bring Mr. Arbery Back To His Family”

In a written statement released after the verdict’s announcement, President Biden credited the justice system with “doing its job” before insisting there’s more work to be done. “While the guilty verdicts reflect our justice system doing its job, that alone is not enough,” he wrote. “Instead, we must recommit ourselves to building a future of unity and shared strength, where no one fears violence because of the color of their skin.”

More like this
Matt Hancock’s TikTok Is The Most Matt Hancock Thing Ever
By Sam Ramsden
"Lavender Haze" Star Laith Ashley Breaks Down Filming With Taylor Swift
By Jake Viswanath
Gillian Anderson's New Netflix Drama Is *Nothing* Like 'Sex Education'
By Frances Stewart
Eurovision Has Been Given A Whole New Look Ahead Of Its Liverpool Debut
By Bustle UK
Get Even More From Bustle — Sign Up For The Newsletter
From hair trends to relationship advice, our daily newsletter has everything you need to sound like a person who’s on TikTok, even if you aren’t.