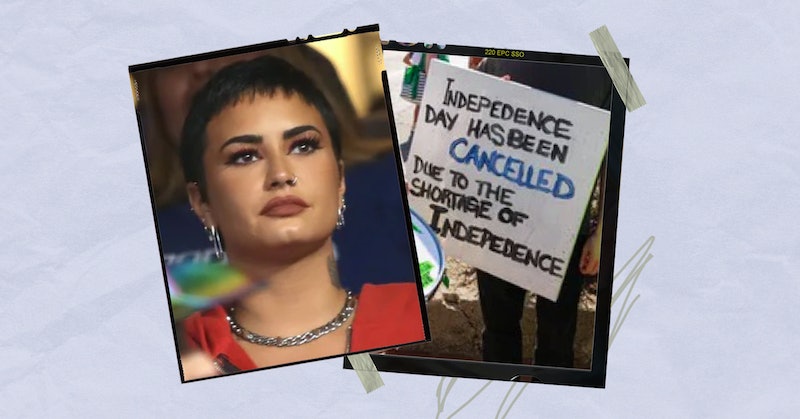 Many Americans aren’t feeling patriotic this year after the Supreme Court rescinded abortion rights across the U.S. by overturning Roe v. Wade, the 1973 case that declared the right to terminate a pregnancy to be constitutional. So instead of celebrating Independence Day on July 4 with fireworks, sparklers, and barbecues as per usual, stars like Jessica Chastain and Demi Lovato have decided to protest the 4th of July instead.

Most celebrities and politicians, from Michelle Obama to Taylor Swift, spoke out against the Supreme Court when their decision was announced on June 24. But many have decided to show their fury once again on the day that the U.S. typically celebrates its independence, with Madonna even stating that it’s “not Independence Day” for women across the country after their right to choose was taken away in several states immediately following the verdict.

Rather than commemorating the 4th of July themself, Demi Lovato let Paper Magazine do the talking by sharing the outlet’s Independence Day post, which showed an American flag at full mast in front of flames and smoke. “Just a reminder that the United States was built by slaves on stolen land,” the caption read. “But we’ve come a long way, to a police state that is banning abortion, not providing healthcare to its people and not electing its leaders on a popular vote... Land of the free!” Lovato was in full agreement with those words, commenting on the photo with several hands-up emojis before re-posting it on their Instagram Story.

Just a week after a video of Jodie Sweetin getting pushed to the ground by police officers during a Supreme Court protest went viral, the Full House alum kept up her activism by attending a “F*ck the Fourth” rally in Los Angeles. In a June 27 interview with E!’s Daily Pop, Sweetin explained that she was walking down the side of a street with other protestors when an officer “just snatched my bag and tossed me forward.” However, the star insisted that she didn’t want to “make this about me” and opted to continue raising awareness for women’s rights and police brutality.

“If people are disturbed by what they saw, let me tell you: I’ve spent a lot of time protesting out in the streets, and that is a very minor incident of police brutality,” she said. “We took care of the situation. We didn’t use that as an excuse to do anything further. We continued our march, and we were out there probably another four or five hours marching downtown.”

The Queen of Pop declared that this year’s 4th of July is “not Independence Day” for women by using a clip from her 2013 short film Secret Project Revolution, which tackles human rights issues and the repression of artistic expression.

More like this
Demi Lovato's New Song "29" Hints At Their Age Gap From Ex-Boyfriend Wilmer Valderrama
By Jake Viswanath
Are John Legend & Kanye West Still Friends? The Singer’s Latest Update Is Candid
By Brad Witter
Kathy Hilton Tried To Explain Why She Misidentified Lizzo As Precious On Live TV
By Jake Viswanath
Kanye West Has The Most Kanye Reaction To Kim Kardashian & Pete Davidson's Split
By Jake Viswanath
Get Even More From Bustle — Sign Up For The Newsletter