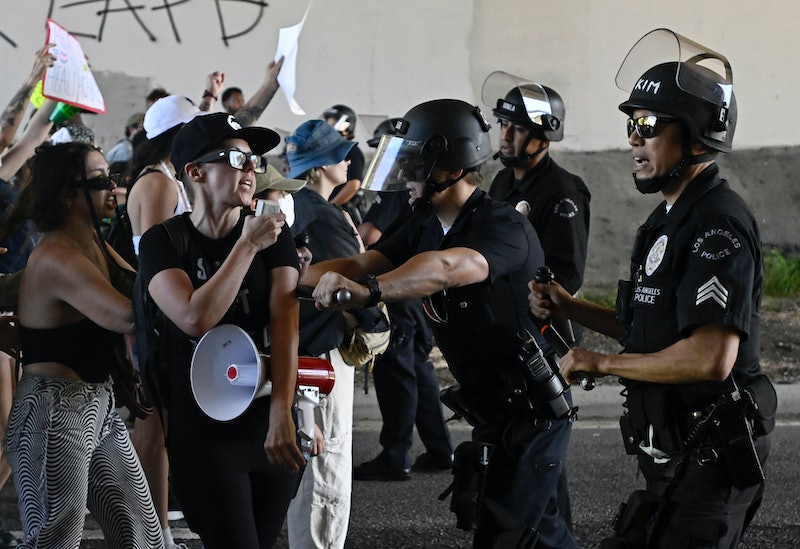 After the Supreme Court’s June 24 controversial ruling that overturned Roe v. Wade and took away the constitutional right to an abortion, people in the U.S. took to the streets to protest the Court’s decision. In Los Angeles, Full House star Jodie Sweetin was filmed leading a protest that turned violent as seen in footage of LAPD officers pushing her and her falling to the ground as a result.

In the video, originally shared by freelance photojournalist Mike Ade on June 25, Sweetin is seen approaching a line of heavily armed police officers before two appear to forcibly push her. Sweetin then gets up and puts her hat back on as the crowd around her erupts in a “no justice, no peace” chant. Sweetin, who reshared the video on Instagram in conjunction with the @theprogressivists account, responded to the footage in the comments section: “Thank you for posting. Love everyone out there in the streets fighting for what’s right… #WeKeepUsSafe”

Sweetin also released a statement, saying, “I’m extremely proud of the hundreds of people who showed up yesterday to exercise their First Amendment rights and take immediate action to peacefully protest the giant injustices that have been delivered from our Supreme Court. Our activism will continue until our voices are heard and action is taken. This will not deter us, we will continue fighting for our rights. We are not free until ALL of us are free.”

On June 27, Sweetin told Access Hollywood that despite living in California, where the right to abortion is still legal, she was protesting for her two daughters and women across the country who will no longer have that right. Sweetin also stated that the group was “being calm and as peaceful as possible” and the violence she endured was nothing out of the ordinary and tame compared to other protests she has participated in. “If people are bothered by what they saw, I hope that they reach out and they start doing some work in their communities for police violence,” she said.

She continued by stressing the public’s role in standing up for human rights. “This is not about me. This is about taking action. This is about women’s rights, LGBTQ rights, this is about Black Lives Matter. This is about so many important things going on in our country right now and I just hope that if people are bothered, that anger and frustration urges them into action.”

This is not the first time Sweetin has been involved in political activist movements. During the Black Lives Matter protests in 2020, Sweetin lead several anti-fascist pledges, publicly decried Trump’s presidency, and supported Dr. Christine Blasey Ford when she came forward with sexual assault allegations against Brett Kavanaugh, who is now a Supreme Court justice.

Ade, who filmed the original footage of Sweetin’s incident, also posted another video of the protests, writing in the caption, “The peaceful protestors were being peaceful, the LAPD was not.”

The LAPD responded and said the use of force will be evaluated internally. “The LAPD is aware of a video clip of a woman being pushed to the ground by officers not allowing the group to enter on foot and overtake the 101 freeway,” the statement said. “The force used will be evaluated against the LAPD’s policy and procedure. As the nation continues to wrestle with the latest Supreme Court decision, the Los Angeles Police Department will continue to facilitate 1st Amendment rights, while protecting life and property.”

More like this
Are John Legend & Kanye West Still Friends? The Singer’s Latest Update Is Candid
By Brad Witter
Christina Aguilera Took A Powerful Stand At Brighton Pride
By Sam Ramsden
Courteney Cox Doesn't Remember Filming 'Friends'
By Jordyn Tilchen and Sam Ramsden
Emma Mackey *Is* Emily Brontë In The First Trailer Of The Biopic
By L'Oréal Blackett and Sam Ramsden
Get Even More From Bustle — Sign Up For The Newsletter