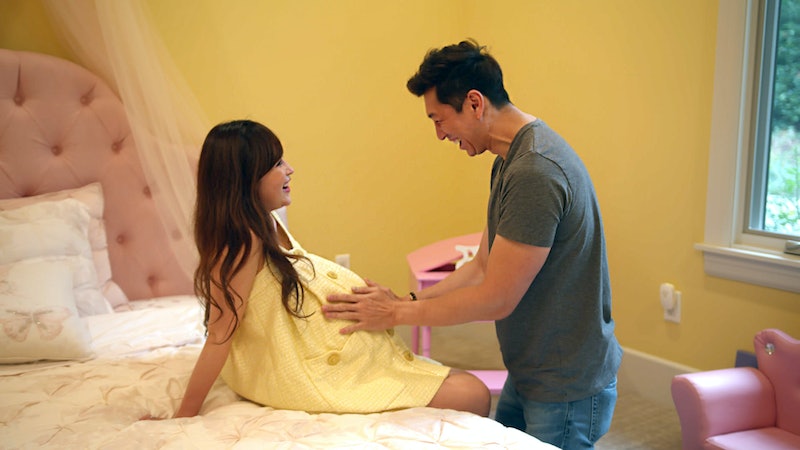 Following their engagement in the Season 1 finale of Bling Empire, Chérie Chan and Jessey Lee announced in July 2021 that they were not returning for Season 2. “We just thought it was time for us to move on and focus on our family, our businesses,” Jessey explained on E!’s Daily Pop, also revealing that he and Cherie secretly married last fall. Even so, the parents to J'adore, 5, and Jevon, 2, insisted they were grateful for their time on the show and wished their former co-stars success in Season 2.

So it came as a surprise when Bling Empire Season 2 premiered on May 13 with Chérie and Jessey one-and-a-half-years deep into wedding planning. By the end of the premiere, however, Chérie’s longtime friend Leah Qin accidentally dropped the bombshell that eventually preceded their abrupt exit from the series just three episodes into Season 2. (Episode 3 is aptly titled “Adieu ma Chérie.”) During a lunch with Jaime Xie, Leah mentioned that Jessey was married to a woman named Crystal when he and Chérie first met “five or six years ago.” What’s more, Jessey and Crystal allegedly had two children together at the time, too.

After the cast gossiped about Jessey’s “secret family” — discussing everything from whether he was still married to Crystal to if Chérie even knew about them — Kane Lim met with Leah to get clarification. During their lunch, she elaborated that Chérie actually met Jessey through his then-wife, who was friends with the man she was dating at the time. According to Leah, Chérie broke up with her boyfriend for Jessey, insinuating that he had also left Crystal for her. However, she had “no idea” if Jessey and Crystal ever got separated or divorced.

Just as Kane was about to confront Chérie at a party, host Anna Shay made a grand entrance — with surprise guest Paula Abdul, no less — interrupting the conversation. Anna warned Kane not to discuss the matter any further, and by the next episode, he said that Chérie wasn’t returning his calls. “She’s ignoring us, and I think it’s because she realizes that we know about Jessey and Crystal,” Kane told Anna the next day.

Though the controversy over her and Jessey’s relationship timeline is an early focus of Season 2, Chérie is proud of their unique story. “It’s ok to marry, fall in love, have kids, divorce, marry again, we should always celebrate love and be there for one another,” she captioned a May 11 Instagram post, also warning her followers not to be “friends with people who try to hurt your family, kids, and close friends,” days ahead of the premiere.

Below, a breakdown of everything we know about Chérie and Jessey’s relationship timeline.

According to Texas court documents, Jessey married Crystal Linh Hoang Lee on June 18, 2011 and filed for divorce nearly four years later. The terms of their divorce would continue to be negotiated in the background for years to come. Their case went to a bench trial on May 31, 2016, with division of marital property being one of the main disputes. The trial court signed a final decree of divorce on August 30, 2016 — though Jessey appealed the decision on the division of their assets.

Though it’s unclear exactly when Chérie and Jessey’s alleged friendship turned romantic, they’ve said on Bling Empire that they conceived their daughter J’adore, who was born in July 2016, the first time they had sex. If that version of events is accurate, they would have started dating in late 2015, at which time Jessey was still legally married, though the divorce may have already been filed. The same was also true when J’adore was born, though the proceedings were well underway.

Following Jessey’s appeal and a new trial, the Texas court signed another final decree of divorce on October 5, 2017. Though Jessey’s appeal was still ongoing in July 2019, a judge affirmed the earlier portions of the judgment that granted the divorce. So even if they still had financial issues to sort out, Jessey and Crystal were already considered legally divorced at that time.

Bling Empire’s inaugural season, which reportedly wrapped filming in October 2019, documented the birth of Chérie and Jessey’s son, Jevon, culminating with her proposing at his 100 Day party. “He said he was going to propose to me and I replied, ‘Sure you are.’ He’s so slow, like a snail!” Chérie told Distractify in February. “But, like when? After I pop out another baby? I’m done having babies. I feel very blessed to have one girl, one boy. Clearly, Jessey’s been saying that for years now and nothing has happened.”

Bling Empire Season 2, which filmed in the summer of 2021, opens with Chérie ring shopping and talking to Anna about wedding planning for the past year-and-a-half. When Anna asks why Jessey didn’t want to get married, Chérie replies, “I don’t think it’s that he doesn’t want to get married. He wants the timing to be correct.” They’d even enlisted the help of a “Feng Shui master” to help nail down a wedding date.

On Aug. 30, Jesse arranged to have the Jacquemart-André Museum in Paris closed to the public, and asked Chérie to marry him in front of a special painting he commissioned of them, along with the words “Will You Marry Me?”. Afterward, Jessey explained to People that he’d wanted to propose to Chérie on multiple occasions. “Although Chérie had proposed to me, I’m glad I got to propose to her now. It’s something I’ve always wanted to do but the timing wasn’t right.”

After keeping the nuptials secret for several months, the couple announced they’d secretly gotten married on Sept. 8 at the Château de Saran castle in Champagne, France. “This wedding, he planned everything,” Chérie recalled on Daily Pop in February. “I was not excited to get married because, for me back then, I wanted to get married because I wanted my mom to be there. And he did everything, so I think I got lucky. I didn’t have to do anything, I wasn’t [a] bridezilla.” Due to COVID restrictions, only eight guests were in attendance, however, so Chérie and Jessey are now planning a bigger wedding ceremony that both their families can attend. Chances are slim, however, that viewers will see it play out on Bling Empire.