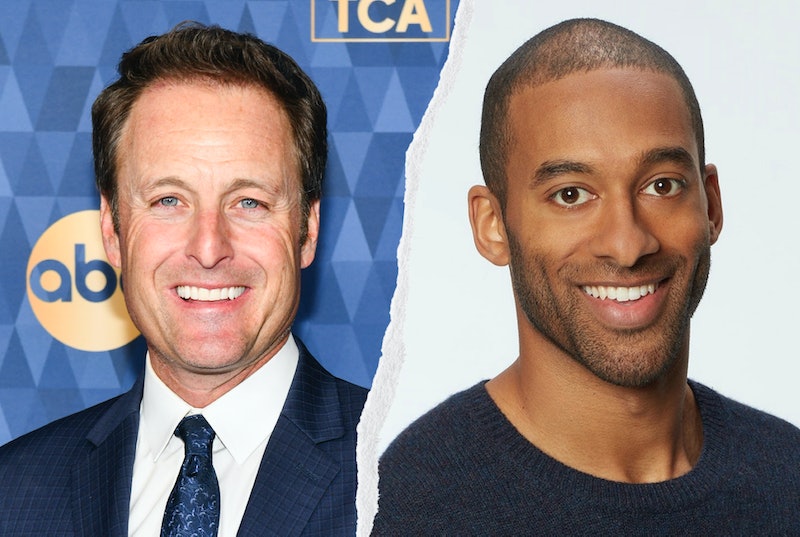 Matt James and his contestants may still be in the "middle of taping" the new season of The Bachelor, but the show's host says things are already going well. During a recent interview with Entertainment Tonight, Chris Harrison revealed how James' Bachelor season compares to Clare's — and how things are going between the new lead and the women competing for his attention.

Like the current season of The Bachelorette, the entirety of Matt's season will be filmed in one location, at the Nemacolin Woodlands Resort in Pennsylvania. "It's the blue print and the formula we used to shoot Clare's season, and is working out perfectly," Harrison said. "I can tell you it's working, it's successful and — knock on wood — it'll continue to be successful." While he didn't offer up too many details about Matt's journey to find love, the host and producer did tease that everything was going "great" for the show's new star. "[Matt] is absolutely awesome. I can't wait for people to see his season of The Bachelor."

ABC Entertainment's Rob Mills echoed Harrison's sentiments in a recent interview with Variety. "It was so interesting because Matt is not on [Clare's] season of The Bachelorette, and the reason why we take leads from a previous season is because you know them so well and we can predict which person he might like or not, but we just didn't know at all, so it was really fun to watch him interact with everyone," Mills said. "And the women were so fantastic. It couldn't have gone better."

Matt's season began filming in September, which the ABC Food Tours founder confirmed when he announced his departure from social media. "See y'all in 2 months," he tweeted before saying goodbye to his best friend (and Bachelor Nation fan-favorite) Tyler Cameron on his Instagram Story. "What a crazy 6 months," he wrote, according to Us Weekly. "I love you brother, wouldn't be here if it wasn't for you an [your] mama," referring to Tyler's late mother, Andrea Cameron, who died from a brain aneurysm in March. "Oh & I'll be back, with a plus one."

Though he was originally cast to appear as a contestant on Clare's season of The Bachelorette, producers decided to make Matt the franchise's first Black Bachelor after filming was delayed due to the ongoing coronavirus pandemic. Still, Harrison told Variety that production on Matt's season has been a much easier process than Clare's. "It was a little bit fluid inside this last season, having to adjust and change some things," Harrison said. "Shooting in California, our wonderful governor was just changing things on a whim ... so this will be a lot easier and a lot more organized because we know what we're dealing with going in."

Harrison isn't the only one who feels like Matt will have an easier time filming a season of his own rather than competing on The Bachelorette. On Nov. 2, Cameron told E! News that Matt "dodged a bullet" by not appearing on Clare's season. "That boy dodged a bullet. That boy is on his own," he said, adding that Clare's journey has been a bit messy. "It's just a disaster. You know what I mean? It's nothing about Clare. It's a mess, you know? Just to be able to jump and skip and be the Bachelor ... good for him, so I am very happy he's not there."

More like this
Kaitlyn Bristowe Said Chris Harrison Ignored Her After Her 'Bachelorette' Hosting Gig
By Grace Wehniainen
'Bachelorette' Vet Clare Crawley Revealed Her Stunning Wedding Photos
By Stephanie Topacio Long
'Bachelorette' Vet Clare Crawley Unveiled 2 Special Wedding Day Accessories
By Stephanie Topacio Long
Hannah Ann Got Engaged 3 Years After 'The Bachelor' & The Proposal Was Dreamy
By Grace Wehniainen
Get Even More From Bustle — Sign Up For The Newsletter
From hair trends to relationship advice, our daily newsletter has everything you need to sound like a person who’s on TikTok, even if you aren’t.