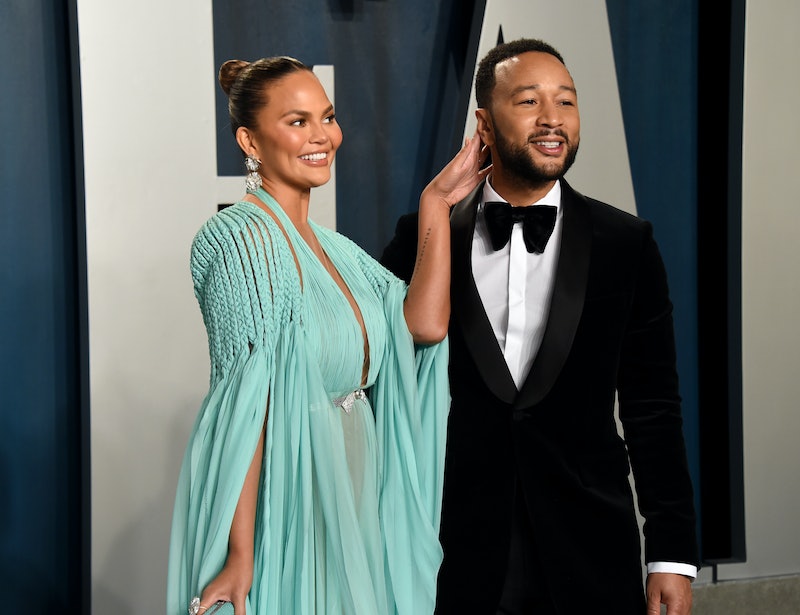 Chrissy Teigen doesn't keep any secrets from her followers — even if sometimes, she divulges things by mistake. While opening up about her difficult pregnancy and ongoing bed rest, Chrissy Teigen accidentally revealed the sex of her third child — a baby boy — on her Instagram Story on September 17. The cookbook author is currently in the middle of two weeks of bed rest, due to complications with her third pregnancy, and was giving fans an "update" about her health when she accidentally let the big news slip.

"I wanted to update you. My placenta sucks," Teigen said frankly, speaking to fans directly from her bed. "It's always been kind of the bad part of my pregnancies," she continued, adding that both 4-year-old Luna and 2-year-old Miles had to be induced as a result. "With Miles, [the placenta] just stopped feeding him, it stopped taking care of him."

However, despite the fact that her placenta is "super weak," Teigen noted that this time, "the baby is really, really healthy and he is big!" Once she realized that she had accidentally let the sex of her third baby slip, Teigen panicked and covered her mouth, before deciding to simply laugh the whole thing off. "Hahahahaha might as well tell you," she captioned her Instagram Story, joking in the next video that she was "stupid" for accidentally revealing the news.

Though Teigen revealed that her baby boy is "growing beautifully" and that she's "feeling good," the issues with her placenta mean that the cookbook author has to stay on strict bed rest in order to avoid bleeding. "I am on complete and total 'don't get out except to pee-pee' bed rest," she explained. "I just wanted to share that because I tell you guys everything and it's such a bummer because I had to cancel so much work. I was really excited to ... do these events because it would start to feel like normal life again but the timing is just sh*t and I apologize. I'm sorry. But I have to make baby okay."

Teigen's third pregnancy has been filled with surprises since the beginning; after she announced that she and husband John Legend were expecting in the music video for his song, "Wild," the Cravings founder actually didn't know she was pregnant for some time. As she revealed in a lengthy Twitter thread, ahead of her breast implant removal surgery in June, she "did the routine pregnancy test you do before surgery. It said negative. It was not negative."

A few weeks after the surgery, she took another test at home, something that she added she's done "for many years now," around once a month. "[It was] just wishful thinking," Teigen — who conceived Luna and Miles through I.V.F. — explained. "I never had a positive before," she added. "I was scared sh*tless. Was pretty positive you shouldn't get your boobs out while pregnant? Pretty sure." Thankfully, despite the shock and the surgery, Teigen's doctor told her that the baby was healthy and doing well.

However, in September, after Teigen was put on bed rest by her doctor, due to her "weak placenta," she revealed that this has been her "most difficult" pregnancy yet. "I'm probably being punished for talking so much about how great the first two went," she joked on her Instagram Story. "I was like, 'Oh yeah, pregnancy's awesome!' But now I get it. I get anyone that thinks it's not so awesome."