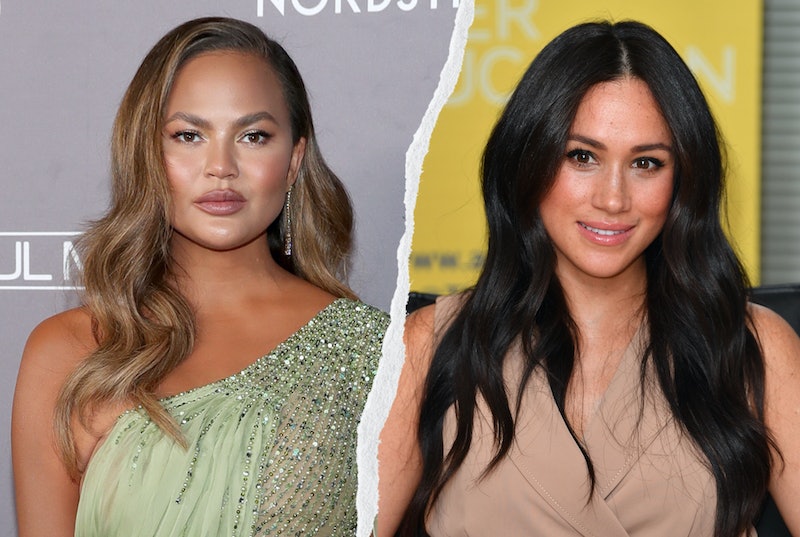 Chrissy Teigen has voiced her support for Meghan Markle in the wake of Markle's miscarriage reveal. On Nov. 25, the Duchess of Sussex published a poignant New York Times essay about the miscarriage she experienced earlier this year. While the essay garnered widespread support, some Twitter users were quick to accuse Markle of hogging the spotlight.

In the essay, Markle wrote about her devastating experience and the stigma around miscarriage. "Losing a child means carrying an almost unbearable grief, experienced by many but talked about by few," she wrote. "In the pain of our loss, my husband and I discovered that in a room of 100 women, 10 to 20 of them will have suffered from miscarriage. Yet despite the staggering commonality of this pain, the conversation remains taboo, riddled with (unwarranted) shame, and perpetuating a cycle of solitary mourning."

Celebrities like Roxane Gay and Ming-Na Wen voiced support for Markle's bravery, with Wen sharing her own miscarriage experience. "Very few want to talk about it," Wen wrote. But other Twitter users criticized Markle's public reveal as a selfish ploy. "This seems like a grab for attention yet again," one Twitter user wrote. Another lashed out, writing, "I thought they wanted privacy, yet here they are inviting the world in."

After one Twitter user reprimanded the critics for being heartless, a Daily Express journalist pushed back. “Is anyone really questioning the pain and sheer awfulness of suffering a miscarriage, or are they perhaps criticizing Meghan‘s decision to write a 1,000 word op-Ed about herself?" he wrote. “What does it add to the resources already available for those who go through a tragedy like this?”

According to Just Jared, in a now deleted tweet Teigen was quick to shut down the journalist's response. “Award for today’s absolute piece of sh*t goes to Marco,” she wrote back. “Congratulations, piece of sh*t.” Moments later, she deleted the tweet. "Sorry, forgot I'm trying to be nicer," she wrote.

On Oct. 1, Teigen shared on Instagram that she had experienced her own miscarriage in September. "On this darkest of days, we will grieve, we will cry our eyes out," she posted. "But we will hug and love each other harder to get through it."

Meanwhile, Markle continues to receive support from her family and friends. Per US Weekly, the royal family announced that they were "deeply" saddened by Markle's miscarriage news, and Prince Charles has been regularly checking in on them. The source also told the publication that Markle's mom, Doria Ragland, has been "helping them heal and come to terms with their painful loss."

Online, the discourse continues. "A great many of you reveal who you really are when anything related to Meghan Markle arises," Roxane Gay tweeted. "I appreciate when you take your masks off. I do."