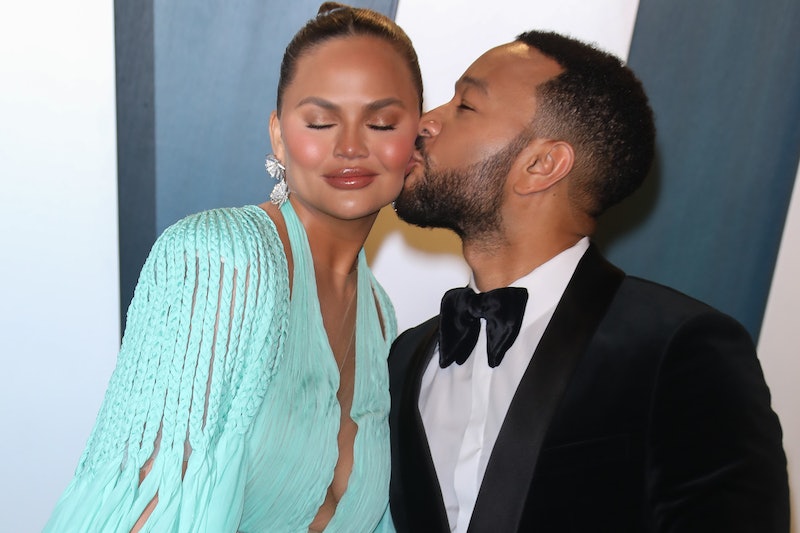 Nearly a month after announcing the loss of her pregnancy, Chrissy Teigen opened up about the experience in a moving essay, which she shared on Medium on Tuesday, Oct. 27. Shortly after posting, she was met with support across social media from celebrities, including Khloé Kardashian, Gigi Hadid, Naomi Campbell, and of course, husband John Legend.

Teigen started her essay with gratitude for those who sent sympathetic messages her and Legend's way in the wake of their loss. "I didn't really know how I would start this, no matter the room or state I was in, but it feels right to begin with a thank you," she wrote. "For weeks, our floors have been covered in flowers of kindness. Notes have flooded in and have each been read with our own teary eyes. Social media messages from strangers have consumed my days, most starting with, 'you probably won’t read this, but…'. I can assure you, I did."

Condolences began pouring in following Teigen and Legend's Sept. 30 announcement that they lost their baby boy (who they called Jack), which came after she was admitted to the hospital for severe bleeding. In her Medium post, Teigen further detailed the health conditions and diagnoses that lead to her eventual pregnancy loss, and opened up about how they said goodbye to their son. "My mom, John and I each held him and said our own private goodbyes, mom sobbing through Thai prayer," she wrote. "I asked the nurses to show me his hands and feet and I kissed them over and over and over again."

Teigen also explained why she decided to share her story and addressed the backlash she received for posting the candid photos, which revealed a "deep pain you only hear about." "I cannot express how little I care that you hate the photos," she wrote. "These photos aren't for anyone but the people who have lived this or are curious enough to wonder what something like this is like. These photos are only for the people who need them. The thoughts of others do not matter to me." Luckily, she has the backing of her husband, who commented, "You amaze me. I love you." Teigen's celebrity friends also flooded her comments with notes of love and strength.

"I love you all so much!!!!" Kardashian wrote. "Forever and ever." Campbell, along with Busy Philipps, sent Teigen and her family "so much love," while Hadid commented, "Thinking of u so often C ... Sending love mamma." Chelsea Handler commended the pair for their courage. "It's brave what you did and how you shared it," she wrote. "And Jack is brave too. In the trees and the sun and the rainbows." Model Emily Ratajkowski, who recently announced her own pregnancy, called Teigen "incredible," while Ellen DeGeneres emphasized the impact of sharing her story. "I wouldn't want anyone to have to go through this, but for anyone who does, I'm so glad they have this to hold on to," she wrote. America Ferrera summed it up best, simply writing "Thank you."

Sophia Bush, Padma Lakshmi, Rumer Willis, and Scheana Shay (who announced her own pregnancy on Oct. 28) were among the many other celebrities to offer their support in the comments. Teigen finished her letter by thanking fans and friends alike for their kind words, giving a special mention to those who shared their own stories of loss. "Jack will always be loved, explained to our kids as existing in the wind and trees and the butterflies they see," she wrote. "Thank you so much to every single person who has had us in their thoughts or gone as far as to send us your love and stories. We are so incredibly lucky."