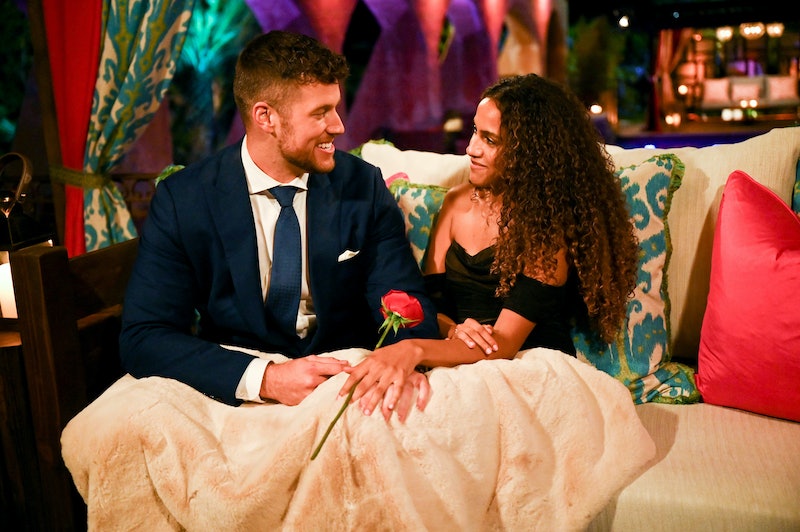 It didn’t take long for Teddi Wright to become a frontrunner on Clayton Echard’s Bachelor season. After joking during her limo entrance that she wanted to be Clayton’s “Teddi bear,” the 24-year-old ICU nurse scored some coveted one-on-one time — and the season’s first kiss. As sparks flew, Clayton gushed to the cameras that he was on cloud nine (“Cloud 10, if you can even get there”) before later awarding Teddi his first impression rose.

“I don’t believe in love at first sight, but I believe that you can have that feeling that you’re like, ‘Wow, there’s something special about this person that kinda separates them from someone else,’” Clayton recently told Bustle of his instant “spark” with Teddi. “And then when I talked to her later in the night, I felt like I had known for more than one day. The conversation was so fluid. She’s a very phenomenal human being.”

Undeniable chemistry aside, winning the first impression rose is one of the strongest factors in predicting Bachelor winners, according to Suzana Somers, who runs the @BachelorData Instagram account. Even if the woman doesn’t ultimately receive a proposal, years worth of data confirms that she’ll likely make it pretty far into the season. Michelle Young and her first impression rose winner, Nate Olukoya, continued the trend when they got engaged during her Bachelorette finale in December — though it’s worth noting this more often applies to Bachelorettes than Bachelors.

Despite their strong start, Teddi made it a point to ensure she remained at the top of Clayton’s mind. “After [Clayton] gave me the rose, he was very validating. Like, you know, ‘I really knew from the moment I met you that you were going to get this.’ He was making me feel very comfortable,” she explained on the Click Bait podcast after the premiere episode aired. “But I also knew that there were so many other women there, so I didn’t think, ‘Oh, I’m getting engaged now.’ ... Tomorrow is a new day. Like, I knew I got this rose, but it all starts again tomorrow.”

While there have yet to be many other clues that Teddi won the season, she and Clayton certainly have plenty in common. Aside from their mutual careers in the health care industry (Clayton currently works in medical sales), they also have backgrounds in athletics: while Clayton played his way up to the NFL, Teddi was a track and field star.

According to her ABC bio, Teddi “is all about that instant connection,” and she and Clayton have certainly checked that box. In a Jan. 4 Instagram, Teddi also hinted that that she was just as much on “cloud 10” as Clayton was during her first night in the Bachelor mansion.

Though her journey to find love on The Bachelor is just beginning to air, Teddi seems content with how things ended, writing in a Jan. 6 Instagram caption that this “might just be the best year yet.”