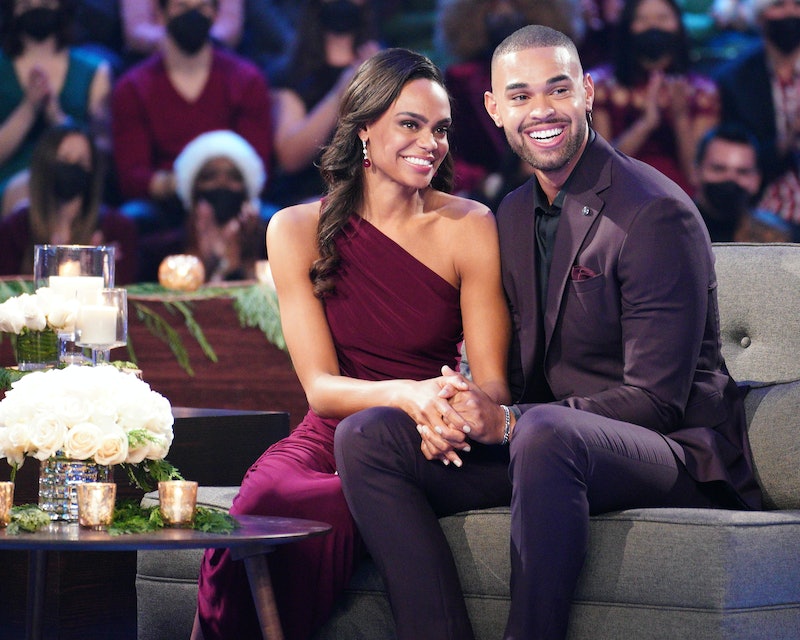 Much to the heartbreak of many a Brandon Jones stan, Michelle Young and Nayte Olukoya got engaged during the Dec. 21 Bachelorette finale. Though a controversial pick, if you’re one for Bachelor Nation spoilers and statistics, the writing was on the wall. Now, the morning after the finale, Michelle and Nayte are answering the remaining burning questions that couldn’t be addressed between F-bombs, Becca Kufrin and Thomas Jacobs making out, and Clayton Echard reading mean tweets.

As Suzana Somers of @BachelorData on Instagram told Bustle at the start of the season, Nayte’s first impression rose made him that much more likely to win the long game — plus, Reality Steve came through with the winner reveal before Michelle’s season even premiered. Still, the engagement wasn’t necessarily a foregone conclusion for fans who questioned Nayte’s readiness to commit, a concern that his family echoed during hometowns and Michelle’s during the Dec. 18 finale. Nayte gets it. “You only have so much time in an episode to tell a story,” he tells Bustle. But he says moments viewers didn’t see might point to a closer connection with Michelle and his soon-to-be-in-laws, too.

“By the end of my conversation with Lavonne, there was hugs. We were laughing, happy ... it ended off on a much better note,” Nayte says. “And then that same energy has just continued, just snowballing every single time we meet each other. LaVonne and I, we text, we send each other pictures of dogs and whatnot, we’re always communicating and looking forward to the next time we see each other.”

For Michelle, Nayte’s perceived hesitance was just one of the realities of finding love on The Bachelorette. “For some people, it’s really easy to do, and for others, they need to be pushed a little bit,” she says. “I’ve definitely needed to be pushed in the past with opening up and being vulnerable, and that’s just kind of what everyone was seeing.”

Next up for the couple? Finding a new home — a process that just got a little easier thanks to that $200,000 down payment gift presented during After the Final Rose. According to the former Bachelorette, it seems to be a fairly no-strings-attached situation. “It truly has been given in a way that it’s just wanting to support this next step of us,” Michelle says. “And it’s something that hasn’t even kicked in ... that we’ve had that opportunity.” (The couple’s eyeing a springtime move, so keep your eyes on their respective Instagrams for the inevitable house hunt.)

Though viewers got to see Michelle and her Bachelorette runner-up, Brandon, work through an intense attempt at closure during After the Final Rose, one eliminated suitor was conspicuously missing from the evening: Joe Coleman. Though Michelle’s local flame wasn’t at the special, she says the absence came down to logistics and confirms they’ve had a chance to catch up off-screen. “Joe and I are both from Minnesota, so we have crossed paths a few times and, you know, have had a very, just, friendly conversation,” she says. So it looks like both Bachelor Nation and the Minnesota basketball community can rest easy that there’s no bad blood between the two.

More like this
Zach Reveals The Chaotic 30 Minutes That Were Cut From ‘The Bachelor’ Premiere
By Grace Wehniainen
RHOP’s Robyn Dixon Explained Why Juan Paid For Another Woman's Hotel Room
By Brad Witter
'RHOSLC' Star Jen Shah Refuses To Do A Post-Sentencing Interview With Andy Cohen
By Brad Witter and Jake Viswanath
Hannah Ann Got Engaged 3 Years After 'The Bachelor' & The Proposal Was Dreamy
By Grace Wehniainen
Get Even More From Bustle — Sign Up For The Newsletter
From hair trends to relationship advice, our daily newsletter has everything you need to sound like a person who’s on TikTok, even if you aren’t.