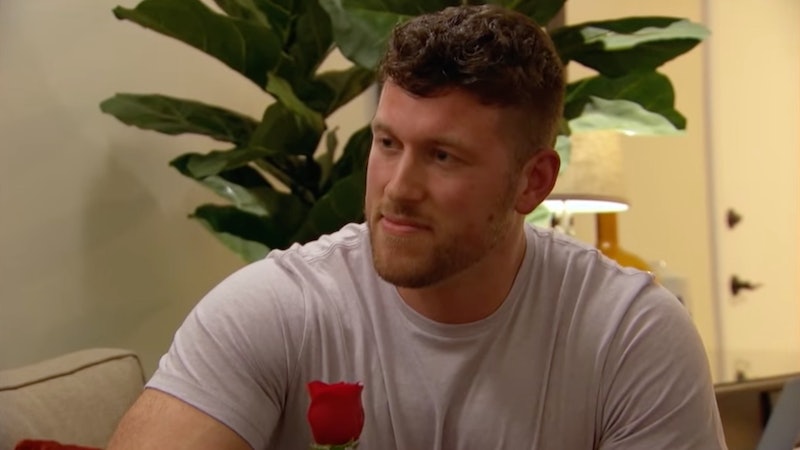 Clayton Echard knows fans aren’t exactly thrilled that he’s the Bachelor – and frankly, he understands it. He barely got any screen time during Michelle Young’s season of The Bachelorette, which included a number of fan favorites viewers would have preferred to see as the lead. “I get where a lot of [the skepticism] is coming from,” the 28-year-old former football player tells Bustle. “People are saying, ‘We didn’t see a lot of him. Who is this guy and why was he chosen over anybody else?’”

Heading into his Bachelor season, which premiered on Jan. 3, Clayton hopes audiences will give him time to prove himself. He says he’s “always been slower” to share his personality, and it takes a while for him to warm up. “I kinda read the room first, and then I will start to open up as I feel comfortable doing so,” he explains.

On night one, he was nervous. “I think everyone [thought], ‘He kind of just laughed and giggled his way through the night,” Clayton says. “[But] I didn’t wanna say anything stupid to these women.”

Still, he had to navigate some tricky situations. Days before the limo entrances, contestant Salley Carson came to his hotel room to talk through her apprehension about continuing the show: she’d recently called off an engagement and had been set to get married that same weekend, bringing up unresolved feelings. He offered her a rose, but she turned it down, feeding into his fear of rejection. Later, Clayton chose to send Claire Heilig home after she told other women that she “hated” him.

Below, Clayton breaks down the ups and downs of his premiere.

From what was aired, your conversation with Salley seemed pretty brief, and people were confused why you offered her a rose. What didn’t we get to see?

Salley and I talked for probably over an hour, and there was a lot of vulnerability being expressed on her end. People say that she had all these red flags. But you have to understand … even if she [felt like she’d] dealt with those feelings, it’s really hard when you get to the actual day. It’s gonna come back up, and it did. I thought she was sweet. I thought she was genuine. And so I felt, “Hey, I give her a rose, she doesn’t have to walk into night one on edge.” She’ll be able to relax a little bit and maybe in a couple days she’ll be able to get past it and we’ll be able to start building this relationship. But she felt that it was best for her to leave and I respect that.

Watching back the situation with Claire, were you surprised by what she was saying before you sent her home? Did you know the full extent of it?

No. Serene had come and told me that Claire was talking very poorly about me. So I had her word and I had to go to Claire and see what her word was. She did say she hated me even though [she told me] she didn’t say that. In Claire’s defense, she said, “I don’t hate you.” Maybe she [meant], “I used that word but I didn’t mean it.” I certainly would like to think someone wouldn’t hate me after five minutes of having a conversation. But it just told me that it was negative energy that I didn’t wanna have around.

You gave the first impression rose to Teddi. What was it about her that you connected with?

She’s incredibly beautiful, but I also loved the way that she carried herself. I enjoyed our first interaction. She was so sweet. She had a nice little intro talking about how I’m a teddy bear and she wants to be my teddy bear. I loved that, it was playful. And when she walked away there was that spark.

I don’t believe in love at first sight, but I believe that you can have that feeling that you’re like, “Wow, there’s something special about this person that kinda separates them from someone else.” And then when I talked to her later in the night, I felt like I had known for more than one day. The conversation was so fluid. She’s a very phenomenal human being.

Is there anything you learned from watching how Michelle handled her season that you carried into your own?

Oh yeah. I was so impressed by her. I don’t think people realize how hard it is to come into this experience. You’re constantly being watched. Everything’s being recorded. It’s like, how are you so confident that you can navigate this as beautifully as she did? I still bump into her and we talk and we have a great relationship as friends. I’m still asking her more questions because I see that beaming smile on her face as she’s talking about Nayte. I want that.