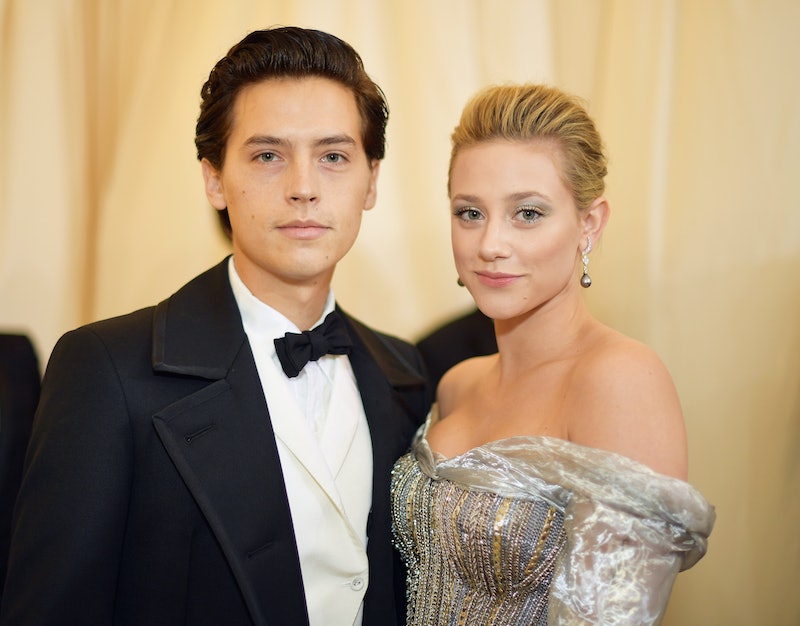 It's official: Cole Sprouse and Lili Reinhart are over for good. At least, that's what the Riverdale actor said in his Instagram post shared Wednesday, Aug. 19. For reasons unknown, Cole Sprouse confirmed his split from Reinhart on social media this week, revealing that the two "initially separated in January of this year" before "deciding to more permanently split in March."

Though he usually likes to keep his private life to himself, Sprouse shared a photo of Reinhart standing in what looks like a forest — the actor is a photographer in addition to playing a "weirdo" on TV — and wrote a heartfelt message about their relationship. "What an incredible experience I had, I'll always feel lucky and cherish that I had the chance to fall in love," he wrote. "I wish her nothing but the utmost love and happiness moving forward." He added that this would be "All I'll say about it, anything else you hear doesn't matter."

He continued, sharing his support for her new film, Chemical Hearts, which premieres on Amazon Prime Video Aug. 21. "Also her movie comes out soon! I'm sure she's just as incredible in it as everything else she does," he wrote. "Thanks guys."

Reinhart hasn't responded to Sprouse's post, nor has she made any kind of public statements on their relationship status. Sprouse's statement does, however, come after a recent interview of Reinhart's made headlines for quotes that seemed to allude to a recent breakup. The actor later denied they were about a breakup, tweeting that she was speaking "about the depression I've felt over these last few months." In a follow-up tweet, she reiterated that she still prefers not to speak on her relationship, adding, "I would never speak so candidly about something as personal as a breakup. That's incredibly private."

Reinhart and Sprouse reportedly have been on and off for almost three years, with rumors of their on-set romance heating up in the summer of 2017. In May of 2018, they made their debut as a couple at the Met Gala, though they still made a point of not discussing their private lives with the public. In fact, ever since they confirmed their relationship, both actors have been adamant that, while they may support each other in public, they don't want to discuss their love lies with the press. "I'm not OK talking about my relationship," Reinhart told Harper's Bazaar in 2018. "I'm not going to tell you my love story. That's just not appropriate right now."

Despite their desire to keep their relationship out of the spotlight, fans have followed the two over the years. And, most recently, their relationship was called into question in May, with many outlets reporting that the Reinhart and Sprouse had split, after it was reported that they had not been quarantining together. Now, Sprouse is saying that the two split permanently in March, which fans might note, wasn't too long before fans started speculating that Sprouse was dating Kaia Gerber, with some claiming that he had cheated on the actor with the model. At the time, he dismissed the reports as "baseless accusations" in an Instagram Story. And based on this new information, it seems we know why.

More like this
'The Queen’s Gambit' Season 2 Tweet Wasn’t From Anya Taylor-Joy
By Mary Kate McGrath, Jack Irvin and Grace Wehniainen
Netflix Shut Down 'Bridgerton' S3 Rumours About A “Very Dark” Storyline
By Bustle
Everything You Need To Know About Kanye's Post-Kardashian Dating Life
By Bustle Editors
Brianna Revealed Why 'The Bachelor' Premiere Was Tougher For Her Than You Saw On TV
By Brad Witter
Get Even More From Bustle — Sign Up For The Newsletter
From hair trends to relationship advice, our daily newsletter has everything you need to sound like a person who’s on TikTok, even if you aren’t.