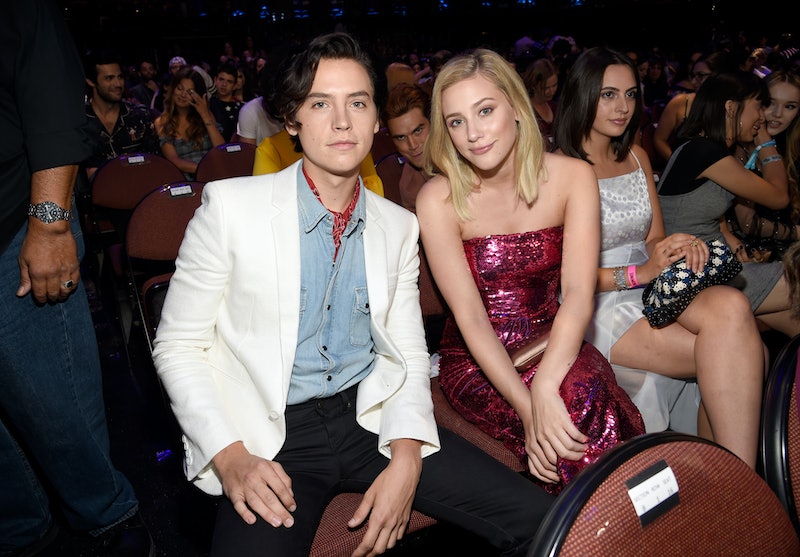 If you watch Riverdale, you probably know that Bughead is one of the most beloved pairings on the show. And for a while, you even had their real-life counterparts as a couple to fawn over. But now Cole Sprouse and Lili Reinhart's relationship timeline has come to an end — much to the dismay of fans who shipped the Jughead and Betty actors IRL.

Though their relationship was rumored to have begun way back in March 2017, it wasn't until May 2018 that the two CW stars finally confirmed they were an item. After the big reveal, the pair started to be more open about discussing their relationship publicly. In an Oct 2018 interview with Teen Vogue, Reinhart opened up about all of the exciting adventures she'd gone on with Sprouse.

“I like to go on adventures with Cole,” she told the publication, “Truly, adventures. He takes me to places where I’m like, ‘How did you find this?’ He’s made me see these things that I would have never seen otherwise. It’s escapism, which is so beautiful and wonderful.”

While the pair are no longer going on adventures together, take a look back at their journey of a relationship.

In March 2017, the pair first sparked dating rumors thanks to a photo that Sprouse posted on Instagram. The actor photographed Reinhart in a field of flowers in the gorgeous snap.

But, the photographer addressed the speculation caused by the photo and told MTV News in April 2017:

"Lili and I play characters who are dating, so just about any time she and I go out into the wilderness, it's Oh my god! But truthfully, I'm a sucker for friends, fashion, and framing."

A few months after the initial romance reports, it was reported by E! News that Reinhart and Sprouse were indeed an item. Eyewitnesses told the publication that they "could not keep their hands off of one another" during Comic-Con weekend, which took place in July 2017.

Although, neither of the Riverdale stars had opened up about their relationship publicly at this point.

In November 2017, Sprouse revealed that he may never confirm or deny his relationship status, for a very specific reason. "No comment," he told People, when asked about the dating rumors, "Whether you dismiss those rumors or whether you encourage those rumors, it’s giving people who are, in my opinion, a bit entitled to your personal life more power."

As Us Weekly reported, the couple was spotted locking lips in Paris, France in April 2018. Even though they still did not comment on their relationship status, this was a pretty big moment for Sprousehart shippers everywhere.

May 2018 marked a major moment for the couple's relationship when they made things red carpet official at the Met Gala (and looked fabulous while doing so).

Shortly after their Met Gala outing, the couple made yet another major relationship move. On May 31, Sprouse posted the first photo of him and Reinhart together on his Instagram, putting to use his well-established photography skills. However, it was still not an explicit confirmation about their relationship status.

Like Sprouse, Reinhart is also not going to open up about a possible relationship anytime soon. In an interview with Harper's Bazaar in July 2018, the star shared that she's simply a performer and does not wish to talk about her relationship status. “I’m not okay talking about my relationship,” she told the publication, “I’m not going to tell you my love story. That’s just not appropriate right now.”

Even though both Sprouse and Reinhart mentioned that they would not be commenting on their relationship status, a birthday message for the Jughead portrayer may have confirmed that the pair is an item. Reinhart showed off her own photography skills and posted a photo of her significant other, writing:

"It seems as if the world would still be a stranger to me, if not for you. I’m so thankful that our paths intertwined to form this beautiful adventure~ Happy birthday, my love."

Her reference to Sprouse being her "love" was a more than major sign that the two are actually together.

Sprouse reciprocated the birthday "love" in September, as he shared a photo of Reinhart, who posed in front of a mirror without a shirt, and wrote, "Both the birthday and the gift. My little muse, happy birthday my love."

In November, the couple took another big step together, as Sprouse spent Thanksgiving with Reinhart and her family. According to People, they not only spent time with the fam, but the Riverdale stars also got to hang out with some of the family's adorable pups. As Reinhart posted on Instagram, in response to a snap of Sprouse and one of her dogs, "This picture makes me so happy."

For Valentine's Day 2019, the pair shared photos of each other on Instagram where they specifically called each other out. Reinhart was the more forward of the two, captioning a photo of Sprouse, "You make me very happy. Happy Valentine's Day, my love." Both posts have since been deleted.

More red carpet snuggles ensued when Lili joined Cole for the premiere of his movie Five Feet Apart, marking the couple's most flagrant public display of affection to date.

The couple again appeared together at the Met Gala, looking happy as can be and marking the one-year anniversary of their first public outing together.

The same month that Cole and Lili appeared together on the cover of W Magazine, numerous news outlets began reporting that the real-life Bughead was donezo. Us Weekly was the first to report the alleged breakup on July 22, citing "multiple sources." Other outlets shared the story before Reinhart publicly refuted the reports in a tweet on July 25, writing, "Don’t believe everything you read on the internet, kids. And news sources should try a little harder to be less vile. 'Reliable sources' can kiss my ass."

In an interview with Coveteur, Reinhart referred to Sprouse as her "boyfriend" when discussing her Halloween costume plans, definitively quelling any rumors that their relationship had ended. "I think I’m leaning in toward a character for Halloween," Reinhart told the publication. "I think I’m going to do it with my boyfriend, Cole. I don’t want to spoil it if it’s not going to happen, but it’s a TV duo."

More accusations of trouble in paradise arose this month when the two actors unfollowed each other on Instagram. Reinhart blamed the unfollowing on a "glitch," according to Seventeen. They soon re-followed each other, but technology couldn't be blamed for the couple's separate appearances at the Vanity Fair Oscars Party less than a week later. The pair arrived at the soirée at the same time but didn't interact with each other all night, according to E! News.

Reports once again surfaced that the couple had broken up, and again, inside sources were cited for the info. But things were different this time. There was no pushback. No smarmy comments from either actor about how unreliable these inside sources were. The pair, it seemed, had truly called it quits.

After both stars went the entire summer without commenting publicly on their breakup, Reinhart seemed to finally open up in an interview with Refinery29 while promoting her new movie Chemical Hearts. She appeared to discuss her breakup and how she has been relying on therapy to help her through what she dubbed the "most emotional few months of my entire life." She told the site, "My therapist [told] me, ‘Your body's going through withdrawal from love.'" However, after the story went viral, Reinhart took to Twitter to clarify that she was simply referring to her battle with depression this year — not her breakup with Cole. "Quotes taken from my most recent interview are not about a 'breakup,'" she wrote on Twitter. "They are about the depression I’ve felt over these last few months. Tired of people taking my words out of context and piecing together their own story for clickbait ... I would never speak so candidly about something as personal as a breakup. That’s incredibly private. I was addressing my depression."

Shortly after Reinhart's interview with Refinery29, Sprouse penned an emotional Instagram post about their split. Alongside a photo of what appears to be Reinhart in the woods, Sprouse wrote: "Lili and I initially separated in January of this year, deciding to more permanently split in March. What an incredible experience I had, I’ll always feel lucky and cherish that I had the chance to fall in love. I wish her nothing but the utmost love and happiness moving forward. All I’ll say about it, anything else you hear doesn’t matter. Also her movie comes out soon! I’m sure she’s just as incredible in it as everything else she does. Thanks guys." Reinhart has yet to comment on the post or make any further public statement about their relationship.

This article was originally published on Jan. 3, 2019