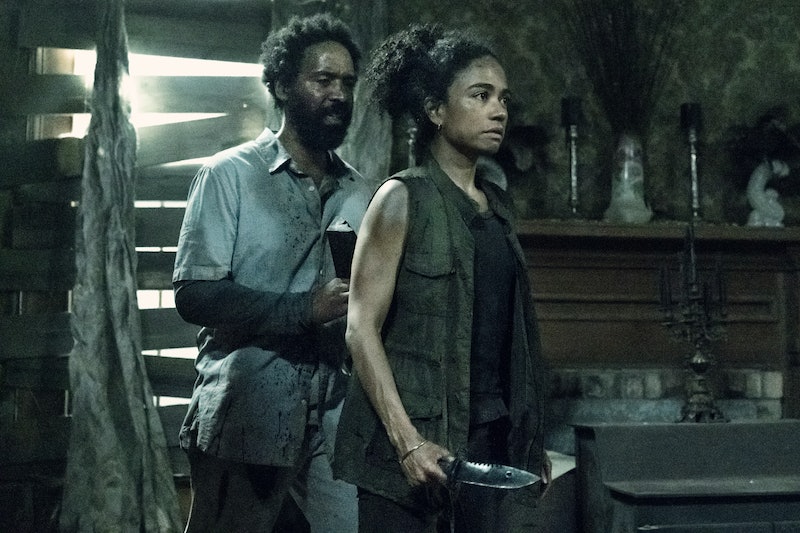 Spoilers ahead for The Walking Dead Season 11, Episode 6. It seems superfluous to describe an episode of The Walking Dead as “horror” when, well, the entire thing is a horror series. But “On the Inside” took it a step further with its feral wall-dwellers and intermittent bouts of silence reflecting the specific experience of Connie (she’s back!) as a deaf woman. Belied by the episode’s truly terrifying imagery, though, is a glimmer of hope for the future — not only are sisters Connie and Kelly finally together again, but the return of Virgil might also be setting up the show’s next big reunion.

The last time we saw Virgil was also one of the last times we saw Michonne: back in Season 10, as she accompanied him on a mission to Bloodsworth Island. There, stashed away on a boat, Michonne noticed Rick’s boots, a smartphone etched with his name, and an adorable illustration of Michonne and Judith. Though Virgil didn’t actually have anything to do with those items, he did encourage Michonne to look for their owner. “Maybe it wasn’t an accident that we met ... maybe you can find them again.” Shortly afterward, Michonne radioed Judith about the possibility of finding Rick — and Judith, formerly known as Lil’ Asskicker, said she should go.

Up until this point, with Michonne gone, Judith has been the only member of the group who knows that Rick might be alive. She apparently hasn’t told anyone else, even Daryl, which might be a super smart strategy on her part — if Daryl knows Rick is out there, he’s probably not going to be able to stop himself from ditching the main group and searching for him.

But now that Virgil appears to be joining the fold (he’s injured, but seems to be alive for now), he will be one more person in on the secret. He even talked about Michonne in his conversation with Connie. And great timing — because with The Walking Dead hurtling toward the end, Rick’s fate is one major loose end that still needs to be tied up. Though the former sheriff is still slated to appear in an untitled Walking Dead movie (which will mark the franchise’s silver-screen debut), the project appears to still be in pre-production. Filming had not begun by the time actor Andrew Lincoln talked to SFX Magazine in April, when he said he’d “never say never” to returning to The Walking Dead for its final season. “Everybody that’s still doing the TV show are dear friends,” Lincoln said, “and it’s an extraordinary feat that they’re still going and making this beautiful and ground-breaking show that still resonates with the world.”

If Virgil’s formal introduction to the group sparks a new mission to find Rick and, in turn, Michonne, it could help shape the show’s final season into a true full circle arc.