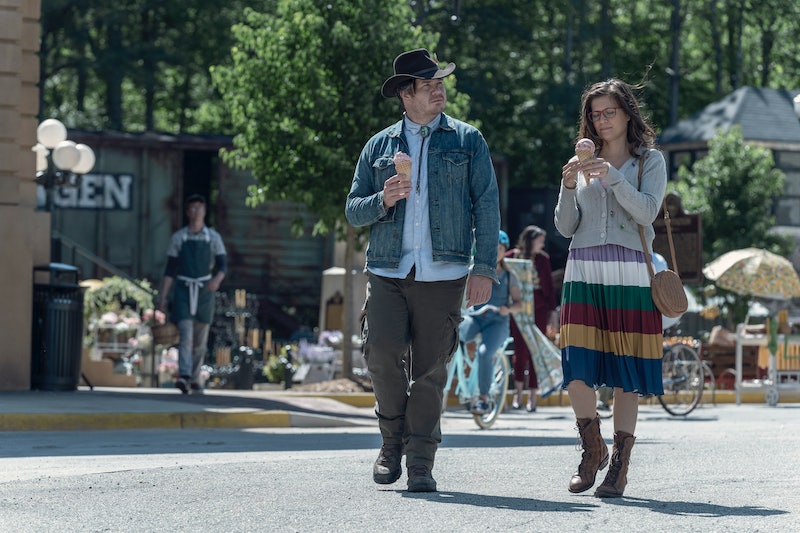 Spoilers ahead for The Walking Dead Season 11, Episode 5. Shopping. A bakery. A horse-drawn ice cream truck where you can spend real money. The Commonwealth is already proving that it’s more advanced than any location we’ve seen on The Walking Dead — but there’s still plenty of reason to be skeptical.

Though comic book readers already knew to be wary of Commonwealth higher-ups like Lance Hornsby and the yet-to-be-introduced Pamela Milton, they may have missed a subtle detail that speaks to the community’s deceptiveness. And it all goes back to Stephanie.

Per IMDb, New Amsterdam star Margot Bingham voiced Stephanie during the radio conversations with Eugene in Season 10. So it came as a surprise when Stephanie was introduced in person in Season 11 — and was portrayed not by Bingham but Chelle Ramos, who recently appeared in Outer Banks as Deputy Plumb. After the episode aired, fans shared their questions (and theories) about the recasting on Reddit. User imachoculatedonnut said they were “very confused” after watching, wondering whether “[the show] changed her, or she’s fake.”

The theory was seemingly confirmed in Episode 5. While Eugene still believes he’s hanging out with Stephanie, Bingham, too, appeared in the episode. After being glared at by Ramos’ “Stephanie,” she exchanged a meaningful look with Eugene while picking up ice cream (Remember how they bonded over an old ice cream shop in their radio chats?). Insider also reported that a photo caption on AMC's press site initially described Ramos as “decoy Stephanie,” but has since been changed to just “Stephanie.”

So how does this align with the comics? Well, it doesn’t — though Stephanie is a major character from the Commonwealth in the comics (and goes on to have a serious relationship with Eugene), the pair’s first meeting goes much differently. In the comics, Stephanie was reprimanded for her conversations with Eugene and wasn’t present at the group’s intake because, as Pamela Milton put it, they “have a protocol for this sort of thing” and “take the integration of new groups very seriously.”

The Commonwealth takes newcomers so seriously that in hindsight, it’s almost quaint to think that the real Stephanie and Eugene would be allowed to see each other freely from the start.

As for why a decoy was employed in the first place, you can probably chalk that up to strategy. The fake Stephanie was quick to break the rules and help Eugene reach his people back home — making it seem as though she was eager to get intel on his old community for the Commonwealth’s gain and report back. Whatever happens, there’s bound to be some hurt feelings when the deception comes to light.