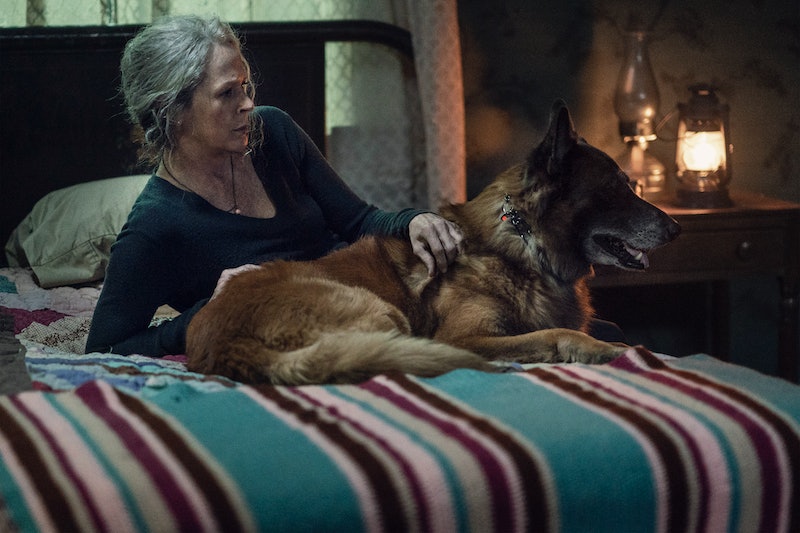 Spoilers ahead for The Walking Dead Season 10, Episode 21. Perhaps more than ever before, The Walking Dead Season 10 has explored the ups and downs of Daryl and Carol’s relationship. Though it seemed like the pair had patched things up in the mid-season finale, old wounds soon resurfaced during “Find Me.” And the most recent “Caryl”-centric episode shows us something even more troubling between the pair: awkward, polite small talk.

“Diverged” follows Daryl and Carol’s separate journeys after their supply run (and ensuing fight) in “Find Me.” She goes back to Alexandria with Dog, makes soup, and tries to catch a rat; Daryl stays out longer for more supplies, comes home, and meets up with Carol, where they share a quick, civil chat. He asks if Dog was good, she simply nods and says he was; she offers him soup, and he says no thanks. Neither shares details about their adventures without each other. In a way, this is scarier than seeing the two fighting, because it seems to suggest the best friends are broken in a more distant way. Even though nothing too major happened, Daryl brushing off Carol makes it seem like he no longer needs her... which, ouch.

Fortunately, there will be some resolution soon. The Walking Dead’s upcoming Daryl and Carol spinoff suggests they’ll have to make up somehow, because surely we can’t watch an entire show about them quietly fighting like this. In fact, showrunner Angela Kang — who is also helming the spinoff — told Den of Geek that the current conflict is a temporary dip on “the roller coaster of emotions those two will go through together over time.”

“In the particular place that they’re at now, it feels pretty far away from where they would have to be in order to go off into their spinoff, but it’s part of their ongoing story,” she told the site in March. “We’ve got kind of a long runway to do it,” she continued, referencing the extended 11th and final season that premieres this summer. So fear not: though it seems like Daryl and Carol’s tension will continue to inform their characters’ arcs (insomuch as everything they’ve ever been through together has), they will likely get through this particular bump sooner rather than later... especially since there’s a whole new potential, group-wide conflict brewing with the introduction of the Commonwealth in Season 11, as AMC’s teasers have suggested.

As far as the functional reason Daryl and Carol will wind up on a buddy adventure together, that remains up for speculation. As Kang said, 24 episodes is a “long runway” to work with, so those clues might emerge slowly over the next year. Until then, please, Daryl and Carol, do something to be friends again. At least for Dog’s sake.