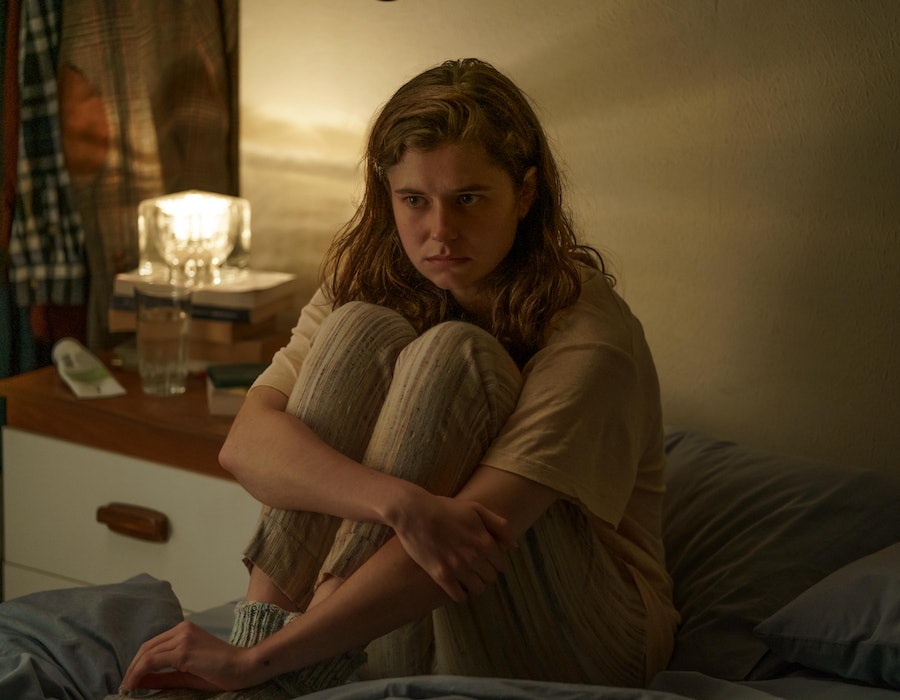 Chronic pain, as sufferers know, is both omnipresent and elusive. It can to swallow you whole one moment — or for days, or even weeks — and seemingly disappear the next. Its depiction in Hulu’s Conversations with Friends via broody young poet Frances’ mysterious menstrual pain, which later is revealed to be the result of endometriosis, is true to that point. It takes over scenes with claustrophobic shots of Frances (Alison Oliver) doubled over in pain in the bathroom, then subsides during a vacation to Croatia, only to return with a vengeance strong enough to send her to the hospital and occupy nearly a full episode of screen time.

Through all the slightly scandalous adventures Frances embarks on with her best friend Bobbi (Sasha Lane), her illicit lover Nick (Joe Alwyn) and his author wife Melissa (Jemima Kirke), chronic pain acts as a fascinating B-plot as she’s forced to manage her pain, her blood, and her discomfort entirely on her own, keeping it a secret from those she loves most.

As in the Sally Rooney book the series is based on, Frances’ pain and pain management impacts her life in ways both big and small. As she falls deeper in love with the charming (and married) Nick, their relationship becomes complicated by her unwillingness to admit that anything is bothering her, emotionally or physically. “She doesn’t really know what is going on in her body and she is so obsessed with control, and yet this [pain] is something she does not understand,” Oliver tells Bustle of her character’s endometriosis, a complicated condition in which tissue that normally lines the inside of your uterus grows outside of it. While Frances hides her pain from almost everybody, Conversations with Friends doesn’t hold back when it comes to accurately (and explicitly) depicting a woman grappling with the condition.

On screen, that means showing a lot of blood. In a scene where Frances is experiencing menstrual pain in the bathroom, the camera pans to a pair of crumpled jeans on the floor, completely soaked in blood. Both Frances and her mother panic at the sight of them because, objectively, it looks like enough blood to panic anyone. “We kept adding more [blood], because it is that much,” says Oliver. “It was important for us to not shy away from how chronic and how crippling and painful it can be to [live with endometriosis.]”

It’s still extremely rare to see a woman taking care of any sort of menstrual pain on screen, endometriosis-related or otherwise. When menstruation does make an appearance, it tends to be either the butt of the joke, as in Superbad, or related to a pregnancy scare. If pain is part of the depiction at all, a gentle hand to the abdominal is usually enough to signify that some general discomfort is maybe happening (and will be over with shortly). But when Frances is in pain, it’s hard to hide her discomfort, even as she goes to great lengths to disguise it. Her pain is severe enough that she passes out in the street, still mumbling for Bobbi not to be worried about her, because it’s just period pain.

Like Frances, many women struggle for years thinking exactly this. One in 10 women suffer from endometriosis worldwide, and due to the complicated nature of the condition, it can often take almost a decade for them to get a concrete diagnosis. Though Frances gets one by the end of the series, she experiences that stress and confusion, too: she sits terrified in the emergency room after that bloody incident while medical staff buzz around her, never answering any questions directly except to tell her that this is “nothing to worry about.” The doctors suggest it might be a miscarriage, it might just be period pain, it might be anything, and send her home.

Conversations with Friends executive producer Lenny Abrahamson and director Leanne Welham consulted doctors and women living with endometriosis to ensure their depiction of the disease was as accurate as possible. Given that endometriosis can also cause pain during sex and infertility, intimacy coordinator Ita O’Brien advised on the way Nick and Frances’ lovemaking might be impacted by her chronic pain condition. “The concern when the pain first started was, had she been pregnant, and what was this all about?” O’Brien says, adding that she factored Frances’ emotional journey into staging sex scenes “that further discovery of herself ... and all the complexity it brings.” After her diagnosis, Frances feels broken, sick, and unlovable and her relationship with Nick changes. She decides that she will figure out how to function with a body that actively revolts against her, alone, away from prying eyes.

France’s endometriosis might start as a side plot, but by the end of the series, it’s clear that the condition is inextricably linked emotionally and thematically to her affair with Nick. Her diagnosis arrives just as Nick starts sleeping with his wife again, and Frances learns of his desires to be a father, making her feel both broken and unwanted. “Many women contend with that question of: Is my body going to serve me?” O’Brien says. “Frances has to ask, ‘How will the endometriosis affect if I want to get pregnant, if I want to have a baby. Is my body as a woman going to do what it’s supposed to do?’”

Frances may be grappling with friendships and relationships, but by the end of Conversations with Friends, it’s clear that there is no more intimate and frustrating relationship than the one she has with herself.