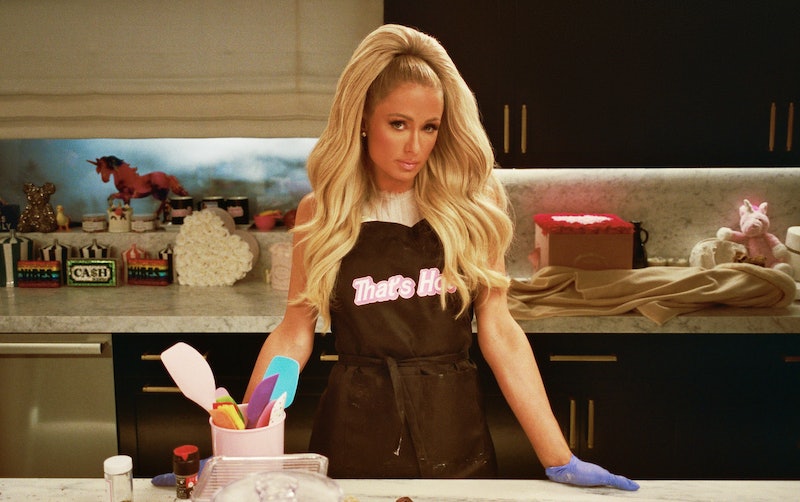 Paris Hilton is entering the world of celebrity cooking shows with Netflix’s Cooking With Paris. In each episode, Hilton invites fellow celebs like Kim Kardashian and Demi Lovato to help her try out new recipes and ingredients she’s unfamiliar with. As they cut and sauté, Hilton chats with her guests about their lives and fame while sharing her own tips for “sliving” (aka “slaying” and “living” at the same time).

Inspired by a viral YouTube video — in which Hilton amusingly cooks lasagna while wearing biker gloves — the show aims to recapture Hilton’s early aughts fame and introduce her to a new audience. Netflix has not announced if the series will return for a second season, but here’s everything we know so far.

It’s unclear when a second season would debut, but Netflix shows usually take about a year to produce from when they’re renewed, so the earliest would be late summer 2022.

The Cooking With Paris Season 2 Cast

As Hilton explained to BuzzFeed, she enjoys both hanging out with her guests and learning from them, too. For example, Kardashian taught her how to “be more organized in the kitchen, because when I cook, there's so many bowls everywhere that are making a huge mess. I'm so disorganized, and she is so organized, like, ‘Paris, we clean as we go!’”

The Cooking With Paris Reviews

Paris Hilton was a well-known heiress, socialite, and influencer in the early 2000s, but Cooking with Paris may have to work hard to find a younger audience — and thus secure a renewal — in 2021. Rachel Sugar at Grub Street suggests that the show is partly satirical, following in the same vein as Hilton and Nicole Richie’s 2003 reality show The Simple Life, where they acted like vapid socialites baffled by working class jobs. But it’s never clear in Cooking With Paris when Hilton is genuinely confused or just faking it. “She has no trouble caramelizing the tops of marshmallows with a tiny butane torch, but moments later, she seems alarmed by the fundamental mechanics of toast,” Sugar writes. “When, in the third episode, comedian Nikki Glaser drops by to make vegan burgers and fries, Hilton is unable to identify a whisk but seems remarkably comfortable with a deep fryer.”

As Variety puts it, Hilton needs to create something more unique if she wants Cooking with Paris to find an audience. “By the end of the series, what we’ve learned about Hilton is that she sort of likes to cook, sometimes; that she has a staff willing and able to transform a room of her house into a theme restaurant at her command; that she likes compliments; and that she doesn’t like learning new things,” Daniel D’Addario writes. “None of this is hurting anyone. But if Hilton wants to keep us watching, at some point it might help to actually create something greater and more lasting than a pose.”

More like this
Everything To Know About A Potential 'Bling Empire: New York' Season 2
By Gretchen Smail
Brittany Snow Files For Divorce From Tyler Stanaland After 'Selling The OC' Drama
By Grace Wehniainen and Radhika Menon
'Bling Empire: New York’ Star Tina Leung Has A Superhero Alter-Ego
By Alyssa Lapid
Who Is Dorothy Wang Dating After The 'Bling Empire: New York'?
By Karen Fratti
Get Even More From Bustle — Sign Up For The Newsletter
From hair trends to relationship advice, our daily newsletter has everything you need to sound like a person who’s on TikTok, even if you aren’t.