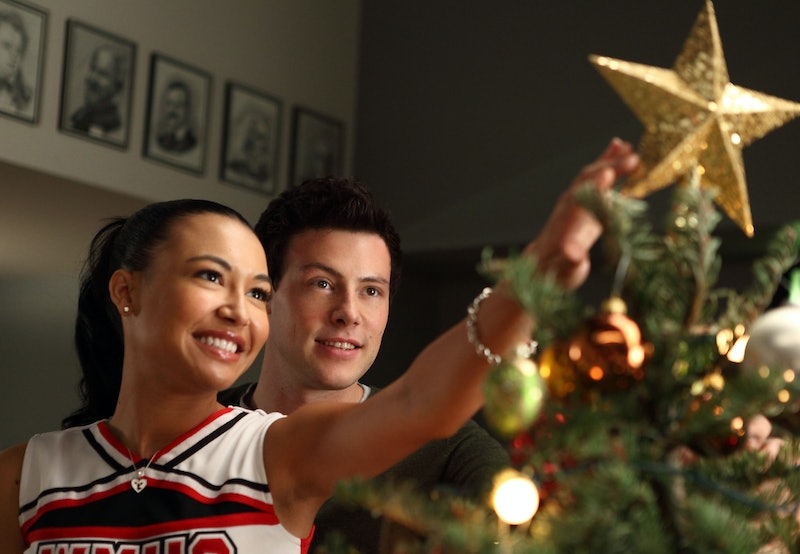 Glee may have ended in 2015, but Cory Monteith and Naya Rivera's friendship will live on. In the wake of the Rivera's body being recovered from Lake Piru in California, Cory Monteith's mother revealed how much he "adored" Naya Rivera in a tribute post to the late Glee star on Instagram. On July 13 — the seventh anniversary of Monteith's death — authorities confirmed that Rivera had died during a boat trip to Lake Piru with her 4-year-old son, Josey Dorsey. The news came five days after Rivera was initially reported missing, on July 8.

Monteith's mother, Ann McGregor, celebrated the connection between the two actors in a tribute post shared on the Cory's Law Instagram page, which she started in order to "continue Cory's legacy of helping others" in 2015. "For the last 7 years the 13th of July has shattered our hearts beyond repair. There aren’t enough words to describe the pain we are feeling, we are truly heartbroken at the loss of Naya Rivera," McGregor wrote, before sharing how much Rivera's friendship meant to Monteith before his death from an accidental overdose in 2013.

"Naya, Cory loved you so so much. He cherished your friendship more than you will ever know," she wrote, alongside two photos of the actors together. "From the laughs you shared, to the strength you gave him when he needed it the most. Cory truly adored you. He was in awe of your incredible talent, the way you gave everything you had to each performance; the slap in the auditorium was one of his favorite stories to share."

She continued, revealing that Rivera "once said Cory was like a member of your family" and so the late actor will "always be a part of ours. We’ll carry you in our hearts forever. We miss you. Friends reunited for eternity." McGregor concluded her post by sending "all our love and strength to your beautiful boy, your family, friends and fans."

McGregor isn't the only person to draw a connection between the two actors in the wake of Rivera's tragic death; on July 13, their Glee costar Kevin McHale wrote on Twitter that he believed Monteith helped police "find" Rivera after five days of searching the lake. "I'm not religious by any means, but you'd be hard-pressed to convince me that Cory didn't help find our girl today," McHale wrote, retweeting a video of Rivera and Monteith signing autographs and greeting fans. "These 2, in many ways, were the male and female versions of one another. So nice, cared deeply, were stupidly talented, the most fun, and really really good people."

Lea Michele also shared a tribute post to both Monteith and Rivera on her Instagram Story shortly after the Sorry Not Sorry author was confirmed dead by authorities. Though she didn't write anything on the posts, Michele did share three behind-the-scenes snaps from her time on Glee: one photo of Rivera and Monteith each, as well as a group shot of the entire cast enjoying a boat ride and staring out at the horizon.

Rivera was first reported missing on July 8 after a boat trip with her son, Josey. After a five day search of the area, her body was recovered on July 13, and the Ventura County Sheriff told reporters shortly afterwards that the actor had likely drowned after getting caught on something, or caught up in a strong current. "The idea perhaps being that the boat started drifting — it was un-anchored — and that she mustered enough energy to get her son back into the boat, but not herself," he said.

More like this
Ashton Kutcher Wants Danny Masterson “To Be Found Innocent” In Rape Retrial
By Jake Viswanath
'Abbott Elementary' Fans Probably Missed This 'Parent Trap' Easter Egg
By Sam Ramsden
At 28, Debra Jo Rupp Was Living A Much Different '70s Show
By Grace Wehniainen
Reese Witherspoon Confirms This Fan Favorite Will Return For 'Legally Blonde 3'
By Jake Viswanath
Get Even More From Bustle — Sign Up For The Newsletter
From hair trends to relationship advice, our daily newsletter has everything you need to sound like a person who’s on TikTok, even if you aren’t.