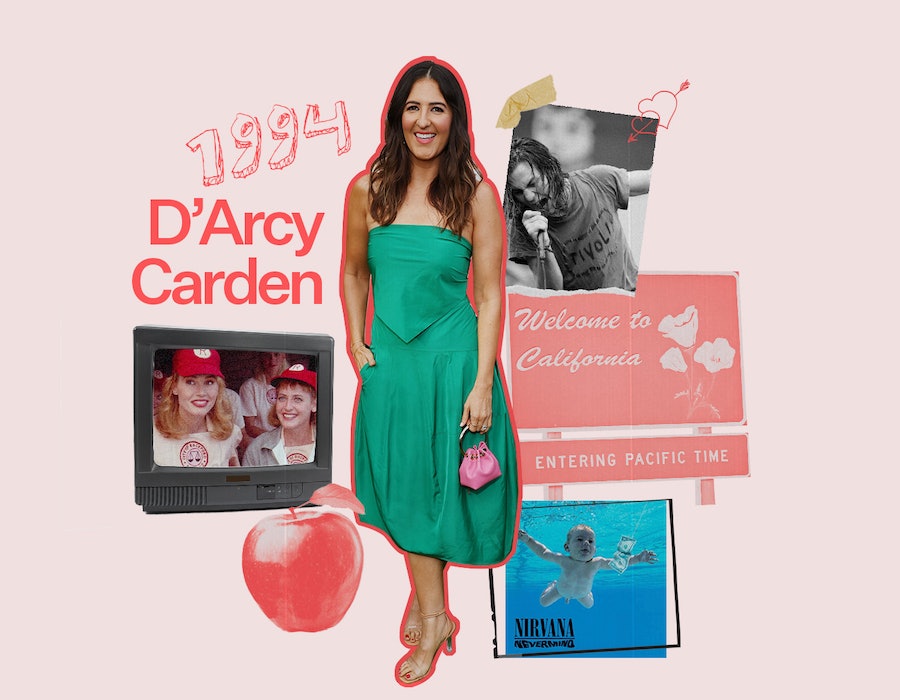 D’Arcy Carden was straddling two different worlds at 14. She was a certified grunge girl with photos of Eddie Vedder plastered over her bedroom wall. She cried so hard on the day Kurt Cobain died she almost couldn't play in her basketball game. At the same time, she was a full-blown theater kid, landing ensemble roles at a Bay Area community theater. “I was trying to figure out who I was between sports and music and theater,” Carden tells Bustle. “Fourteen was one year but two separate lives.”

But for Carden, the summer of 1994 — the months between middle school and high school — changed everything. “I was making out and doing drugs,” she says. High school brought the joys of parties and homemade bongs crafted out of fruit. “Looking back on the beginning of my 14th year versus the end of my 14th year, I almost couldn't recognize myself. It was one of the biggest changes I ever went through.”

Now 42, Carden is getting ready for another change, a jump from comedic character actor to charming leading lady in A League of Their Own. In a nostalgic twist of fate, this is the role her younger self always dreamed of. “When I watched the movie, I was like, I want to be a part of that — get me up there with them,” she says of the 1992 baseball film. In Prime Video’s TV reboot, Carden plays the smooth-as-hell Greta, the Rockford Peaches’ first basewoman who pulls the show’s lead Carson (Abbi Jacobson) into her orbit. While the actor is best known for her turn as the Amazon Alexa-inspired Janet in The Good Place, she more than pulls off Greta’s undeniable sexiness. It was a unique challenge playing a character that demands the attention of every room (and baseball stadium) she walks into, but Carden was determined to rise to the occasion.

“When I first read the script, I just sort of idolized Greta. I was like, damn, she is cool and confident, and she has a lot of swag,” says Carden, adding that the role is not usually in her wheelhouse. She leaned on Jacobson, the show’s creator and star, for support. “Sometimes you can’t see yourself or what you are capable of, but you have to trust the people around you.”

The cast spent months playing baseball together before the cameras began rolling. “We became an actual baseball team first, and the show was the secondary thing.” They giggled their way through night shoots; that joy is transparent on screen. With A League of Their Own, Carden has finally found the perfect balance of theater, sports, and angst.

Below, Carden reminisces about her early acting days, trying cigarettes, and loving Pearl Jam more than anyone else.

I grew up in a cute little town called Danville, like 30 minutes east of San Francisco, close enough to be cool but totally suburban and not cool. The funny thing about 14, which was half of 8th grade and half of freshman year, is that these are two wildly different interviews. My 14-year-old, 8th-grade life and my 14-year-old, 9th-grade life are completely different times in my life.

Let’s start with 8th grade. What were you up to as you were finishing junior high?

I was obsessed with a few things, as all junior high students are. I had joined an outside-of-school theater company that year that completely took over my social life. 1994 was also exactly when the grunge era was, and I was all obsessed with Pearl Jam, Nirvana, and everything that came with that. I remember wishing my family would move to Seattle. I remember being like, “That’s where it is, man.” [My friends and I] would go to thrift stores and buy skater clothes and never, even once, did I think I attempted to get on a skateboard. I don’t think I would have survived it. We were dressing like boy skaters and identified as grunge girls.

What about grunge spoke to your 14-year-old heart?

I remember the first time I heard “Smells Like Teen Spirit,” and all I could picture was a band like Guns N’ Roses with big hair and ripped jeans, like a hair band. Then I remember seeing the video or a picture of [Nirvana] and thinking, “HUH, WHAT?” It was so new and young, and it was like they were singing to me. Whatever the rock and roll thing that happened for our parents with The Beatles — that feeling of “my parents just don’t understand” — that is what [grunge] was for me. Eddie Vedder was singing to me. In fact, I was so obsessed that if other people liked Pearl Jam, I was like, “You don't get it; you don’t like him like I like him. Stop talking about them.”

How did theater shape you at 14?

I always loved to do things on stage. I was the first one to jump up to be on any stage, as pathetic as that sounds. We had to audition to be a part of this theater company, so I felt proud of myself that I got to be a part of it. It felt exclusive, yet in the couple of plays I did, I was in tiny parts; I was not the lead. These were really talented kids, and I was the goofy, funny one they would cast as the old lady or the man, which is typical for a tall kid.

So acting was always the goal?

I don’t know how to explain this because I think I am a rational, level-headed person, but I have never wanted to do anything other than acting in my life. As a grounded individual, I know that is not a smart move. I knew the whole time that this isn't what a smart person would do; they would have backups and other options, but it was just the one thing from that age.

What happened during the summer between 8th and 9th grades that changed you so much?

Junior high was a pretty sweet time in my life. I had a lot of great friends; I was doing theater and playing a bunch of sports. I loved my teachers. I remember not having any enemies in junior high. Junior high can be tough, but in general, junior high was innocent and sweet. I remember a few kids would try to smoke cigarettes, and I felt strong in my beliefs, not judgmental, but like, “That is not what I do.” Until my small group of very best friends was like, “Hmmm, should we try a cigarette? Or should we hollow out this apple and try to smoke weed out of it?” So, that was the summer before freshman year, us being like, “Well, maybe we do try it, just so we are not total dorks in high school.”

When you started high school, were you nervous?

It was a little bit of a shock to the system, all these older kids and the excitement and pressures of high school where the seniors are celebrities, and you’re just a pathetic little freshman. My group of little friends got noticed by the older kids, and we got sucked into the older kids’ world. We went from good little girls that follow the rules and listen to our parents to sneaking out of the house and smoking cigarettes. Although, I kept trying to smoke cigarettes, and every time, I would throw up. I tried it enough that I could feel when the barf was coming, and I would excuse myself around a corner and barf and then come back and be like, “Ok, we are cool. We are smoking.” I clearly was absolutely allergic to it and could not hang.

What was a typical fun night for you at 14?

It would probably be a house party, but maybe not one where the parents are gone, not even a rowdy house party because those were exciting but also scary. A cool parent that wasn't bugging you and the night ended in a game of truth or dare, that felt wild and epic, one where you got to watch friends make out or something.

The cheesy truth is I am doing exactly what 14-year-old D’Arcy would have wanted to be doing. I know that is a bold statement because there are ups and downs and good days and bad days. The 14-year-old me wanted to be an actress and loved getting to do comedy and be funny on stage. The weird tie-in was that I loved playing sports and had to figure out how to walk the line between playing sports and doing theater. Now being on [A League of Their Own], where we got to play baseball, is like the coming together of two of the things I was interested in as a 14-year-old kid.

More like this
On 'The Handmaid’s Tale,' Christine Ko Fights Back
By Gretchen Smail
At 28, Sharon Horgan Was Hoping To See Damon Albarn At The Pub
By Samantha Rollins
Ismael Cruz Córdova Loves His Elf Ears
By Morgan Leigh Davies
Jinkx Monsoon Is About To Get Real Sketchy
By Sam Ramsden
Get Even More From Bustle — Sign Up For The Newsletter