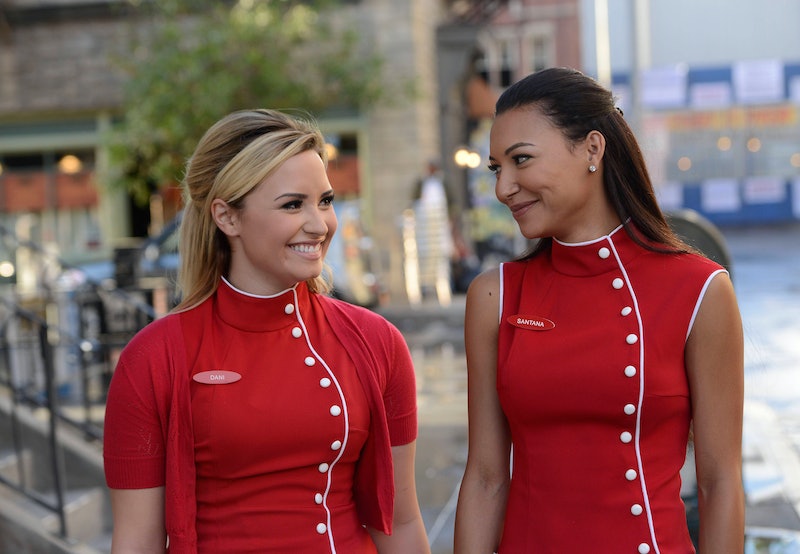 Dani and Santana may have only dated onscreen for a short time, but their love story definitely made an impression. In the wake of the Glee star's tragic death, Demi Lovato paid tribute to Naya Rivera, celebrating the impact she and her character had on queer and Latina women everywhere. The "I Love Me" singer — who starred as a love interested for Santana Lopez on Season 5 of Glee — shared a series of behind the scenes photos of herself and Rivera on the set of the Fox comedy on Instagram on Monday, July 13.

"RIP Naya Rivera," Lovato wrote, shortly after news broke that Rivera's body had been recovered from Lake Piru in California. "I’ll forever cherish the opportunity to play your girlfriend on Glee." The singer continued, revealing that she saw herself in Rivera's character, Santana, even as she starred opposite her onscreen. "The character you played was groundbreaking for tons of closeted queer girls (like me at the time) and open queer girls, and your ambition and accomplishments were inspiring to Latina women all over the world," Lovato wrote. "My heart goes out to your loved ones at this time."

After Rivera was first reported missing on July 8, Lovato joined several other Glee stars in sharing her hopes and prayers for the actor's safe recovery on social media. "Please pray for @nayarivera to be found safe and sound," the singer wrote on her Instagram Story, along with an image of a lit candle.

Lovato is far from the only person who honored and praised Rivera for her performance as Santana, the sharp-tongued cheerleader who fell in love with her best friend, Brittany Pierce (Heather Morris). Over the course of the show's run, Santana and Brittany's love story became one of Glee's biggest and most defining arcs, with Rivera's performance helping LGBTQ+ viewers everywhere see themselves onscreen. "I want you to know she knew this - about her character - it’s one of the things she was most proud of," Rivera's friend Jaime Primak wrote on Twitter.

Rivera was first reported missing on July 8, after authorities reported that her 4-year-old son, Josey Dorsey, was found alone on a boat that she had rented on Lake Piru. According to the Ventura County Sheriff's Department, Josey told authorities that he and his mother had gone swimming, but Rivera never came back to the boat. After an intensive six-day search, authorities confirmed that they had recovered the actor's body on July 13.

During a press conference, the Sheriff told reporters that officials believed Rivera likely drowned after being caught on something underwater or getting caught in a strong current. "The idea perhaps being that the boat started drifting — it was un-anchored — and that she mustered enough energy to get her son back into the boat, but not herself," the Sheriff stated, though he stressed that it was just speculation at this point.

In the days before her disappearance, Rivera's social media accounts were full of messages of support and love for her 4-year-old son. "No matter the year, circumstance, or strifes everyday you're alive is a blessing. make the most of today and every day you are given. Tomorrow is not promised," the actor wrote on Instagram on July 2, alongside a makeup-free snapshot. On July 7, Rivera shared a photo of herself cuddling Josey and kissing him on the forehead, which she lovingly captioned, "just the two of us."

More like this
The 'Glee' Cast Isn’t Happy About 'The Price Of Glee'
By Jake Viswanath
Here’s What Happens To Bill & Frank In 'The Last Of Us' Video Game
By Brad Witter
Adam Ali Hopes 'Waterloo Road' Will “Subvert” Queer Misconceptions
By Sam Ramsden
At 28, Rosie Perez Risked Her Career To Stop Playing Stereotypes
By Gabrielle Bondi
Get Even More From Bustle — Sign Up For The Newsletter
From hair trends to relationship advice, our daily newsletter has everything you need to sound like a person who’s on TikTok, even if you aren’t.