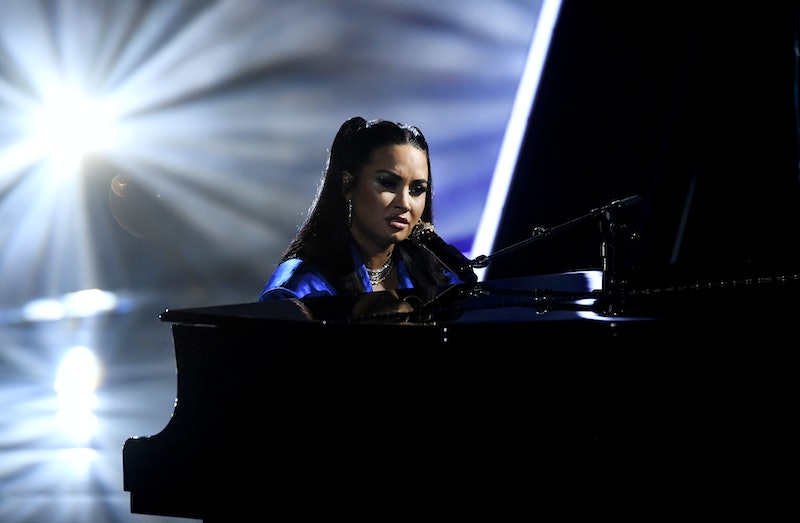 Demi Lovato has an answer for anyone who thinks she should focus on music instead of politics. Following the insurrection attempt made by supporters of President Trump on Jan. 6, Demi Lovato teased new music inspired by the violent storming of the U.S. Capitol in a series of emotional posts on Twitter. The singer — who has been incredibly vocal about her support of the Black Lives Matter movement and her contempt of the Trump administration — shared a post from the official BLM Twitter comparing the different ways police treated insurrectionists on Wednesday and the peaceful protesters over the summer.

"My heart is broken. It makes me so sad to believe how naive I was to think this couldn't possibly happen, and yet it did. Here we are," Lovato wrote on Twitter before addressing people who think she should focus on her music instead of political events. "For everyone in my comments saying 'where's d7' or wanting me to sing instead of speaking up about what needs to change in this country... THIS IS WHY I POST AS MUCH AS I DO. THIS IS WHY I CARE. THIS CANNOT HAPPEN ANY F*CKING MORE."

She continued by explaining that she was "angry, embarrassed and ashamed" after seeing what happened at the Capitol Building. "I'm in the studio working on something special after today's assault on democracy," Lovato concluded her posts, adding the hashtag #impeachtrumptonight. While she didn't specify that the song was written as a direct response to the unrest in Washington D.C., Lovato's name quickly began trending on Twitter as fans shared their support for her decision to speak out.

The singer has frequently used her platform and music to advocate for issues that are important to her. In October, Lovato released the song "Commander in Chief," which directly criticized Trump for his mishandling of the coronavirus pandemic and his selfish behavior during his time in office. "We're in a state of crisis, people are dying while you line your pockets deep," she sings on the chorus of the song. "Commander in Chief, how does it feel to still be able to breathe?"

Shortly after its release, Lovato explained that the track — which was released in the middle of the 2020 presidential election — was her way of holding Trump accountable for his actions. "There's been so many times that I've wanted to write the President a letter or sit down with him and ask him these questions," she told CNN. "And then I thought, I don't really actually want to do that and I thought one way that I could do that is writing a song and releasing it for the whole world to hear and then he has to answer those questions to everyone and not just me."

When she was criticized by some social media users for "getting political," Lovato explained that standing up for her beliefs was more important than pleasing everyone. "I literally don't care if this ruins my career," she wrote in response to her critics on Instagram. "I made a piece of art that stands for something I believe in. And I'm putting it out even at the risk of losing fans."

"I'll take integrity over sales any day," Lovato continued. "As much as I would like to be sad that I disappointed you, I'm too busy being bummed that you expect me, a queer Hispanic woman, to silence my views/beliefs in order to please my audience. I.e. your family."

More like this
What Demi Lovato Really Thinks About Child Stardom, Depression, & Sobriety
By Radhika Menon
Demi Lovato Might Stop Touring Forever Due To Being "So F*cking Sick"
By Jake Viswanath
Mel C Wants You To Know That Margaret Thatcher Wasn’t A Spice Girl
By Darshita Goyal
Two UK Cities Are Now In The Running To Host Eurovision 2023
By Sam Ramsden and Rachel Mantock
Get Even More From Bustle — Sign Up For The Newsletter