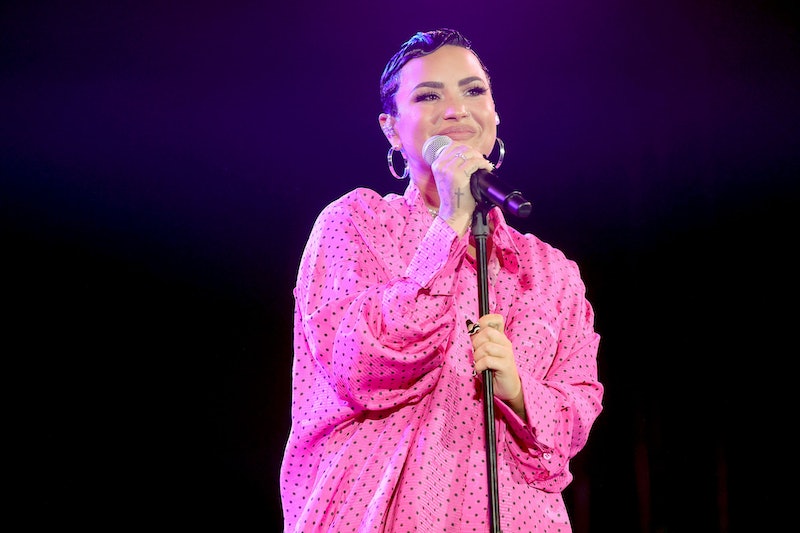 Sure, the switch to 2022 might just mean buying a new calendar — but it can also be a symbolic catalyst for transformation, something Demi Lovato has been proving to the fullest. First, the “Dancing with the Devil” singer debuted a new buzzcut over the holidays, in a now-deleted Instagram post captioned “#freshstart.” The next part, it seems, was Lovato’s recent decision to wipe their entire feed save for one post: a selfie collage aptly dated Jan. 1. Now, Lovato’s latest update is new ink for the new year — specifically, a spider tattoo on their freshly shaved head.

Lovato documented the tattoo process, yet another collaboration with artist Dr. Woo, on their Instagram story on Saturday, Jan. 8. It showed more of Lovato’s hair had to be shaved off to make it work, and the musician was already making plans for a fresh haircut to clean up their new buzz. “Now @alchemistamber come fix my hair pleeeease 😂,” they wrote.

So, why the arachnid? No, Lovato isn’t just a die-hard Spider-Man super-fan (well... that we know of). Rather, the inspiration for this particular ink appears to stem from Native American mythology. Lovato shared a quote on their story explaining the legend:

According to the American Museum of Natural History, references to the Spider Woman are part of the Southwest’s cultural tradition — and the Spider Grandmother, specifically, stems from the Hopis. “Conscientiously weaving her webs,” the AMNH writes, she “thought the world itself into existence.”

In addition to finding meaning in the mythology, Lovato also appears to have been inspired by Dr. Woo’s past work with spider designs. On Jan. 5, they commented five flame emojis on a post of a client with their own eight-legged artwork.

Of course, Lovato’s recent changes go way beyond the physical. Us Weekly reported on Jan. 8 that the singer recently completed a rehab stay before spending the holidays at home. People also reported on the private stay, with a source claiming that Lovato “is committed to their well-being, and throughout their life, they plan to do regular check-ins to make sure they are putting themselves first.” The update comes a month after Lovato announced they were “no longer ... ‘California Sober,’” noting that “sober sober is the only way to be.”

More like this
Olivia Rodrigo Manifested Finally Meeting Demi Lovato
By Jake Viswanath
Beyoncé Just Announced Tour Dates: Here's How To Cuff Tickets To Her 2023 Shows
By Jake Viswanath
Adam Levine & Behati Prinsloo Welcome Their Third Child Together
By Jake Viswanath
Meghan Trainor & Daryl Sabara Are Expecting Their Second Baby
By Jake Viswanath
Get Even More From Bustle — Sign Up For The Newsletter
From hair trends to relationship advice, our daily newsletter has everything you need to sound like a person who’s on TikTok, even if you aren’t.