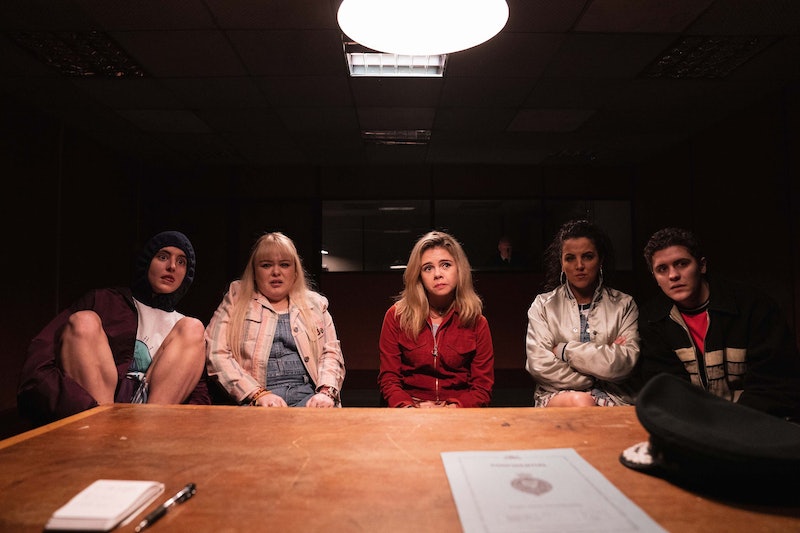 The third and final (wah!) season of Derry Girls just aired its first episode, and alongside a new chapter of adventures for our favourite hilarious gang of Northern Irish students, the first episode also featured a massive and unexpected celebrity cameo.

When we first catch up with Erin, Clare, Michelle, James, and Orla, the Good Friday Agreement — a landmark moment for peace in Northern Ireland — is right around the corner, but the group of mates are more focused on winning an Oscar for an amateur film they’ve been making about the shifting political climate, along the small matter of collecting their GCSE results.

But when their typically deadpan school principal, Sister Michael, ominously warns them to enjoy the time they have left, panic sets in and the friends head off on an epic quest to break into school to read their results a few hours before everyone else. The plot swiftly takes a terrible turn when they accidentally end up assisting a pair of polite burglars relieve the school of its new computers. Soon enough, the girls and the “wee English fella” are bundled down to the local police station for questioning.

And as the camera moodily pans around from behind a silhouetted officer, the show unveils its biggest guest star yet. It turns out that Chief Constable Byers, the man tasked with the unenviable challenge of getting a confession out of the Derry Girls, is played by none other than Northern Irish actor Liam Neeson, star of Schindler’s List, Taken, and Love Actually.

The scene that ensues is as sharp and surreal as you’d expect from Derry Girls’ writer and creator Lisa McGee, with each character trying their best to escape a criminal charge. As well as finally revealing the first name of Our Lady Immaculate College’s chief nun, the scene also incorporates plenty of the Northern Irish political comedy that Derry Girls consistently does so brilliantly.

After early attempts to flirt her way out of captivity fail, Michelle accuses Bryce of trying to stitch them up “because we’re Fenians” (Irish Nationalists, or Catholics) and Erin swiftly turns around the interrogation to grill him on the number of serving Catholics in the police force. Ultimately, Erin’s hilariously boring Uncle Colm gets the girls off the hook with a sprawling tale about a Derry man named Diego, which includes a tangent into the Spanish Armada. Eventually, Neeson’s character crumbles, and orders his detainees to leave. “For the love of suffering Jesus, please take him [your uncle] with you”. It’s a genius twist.

Season three of Derry Girls continues on Channel 4 next Tuesday at 9.15pm, with the six episodes airing weekly going forward.

More like this
At 28, Emma Thompson Was Already A Star — But Unhappy In Love, Actually
By Olivia-Anne Cleary
Kate Bush Reacts To “Mad” Revival Following 'Stranger Things' Cameo
By Sam Ramsden
Regé-Jean Page Spoke Out On His Rumoured 'Bridgerton' Return
By El Hunt and Maxine Harrison
Here’s Everything To Know About ITV’s Latest Rom-Com 'You & Me'
By Catharina Cheung
Get The Very Best Of Bustle/UK