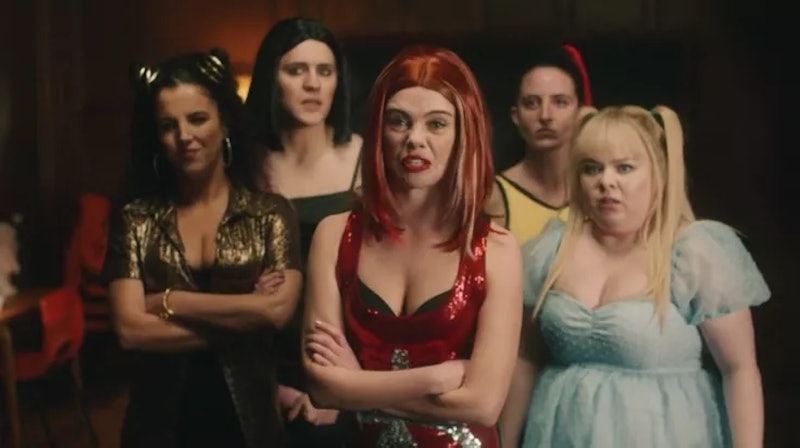 The third and final series of Derry Girls returned for a second episode on Tuesday night and viewers couldn’t get enough of its rather epic Spice Girls tribute. Following the highly praised season premiere, the latest instalment saw the much-loved Derry crew enter the Our Lady Immaculate College’s Stars In Their Eyes-style competition, and the result had Twitter ready to “swing it, shake it, move it, make it.”

Indeed, viewers thoroughly enjoyed watching the gang attempt to win the chance to perform on national television and fans flocked to social media to praise the gang’s performance of Spice Girls’ “Who Do You Think You Are.” We witnessed Clare (Nicola Coughlan) as Baby, Michelle (Jamie-Lee O'Donnell) as Scary, Erin (Saoirse-Monica Jackson) as Ginger, Orla (Louisa Harland) as Sporty and James (Dylan Llewellyn) as Posh.

Meanwhile, the witty back-and-forth between Father Peter (Peter Campion) and Sister Michael (Siobhán McSweeney) brought in the laughs, while some perfectly placed Father Ted nods were also highlights from the second episode.

Elsewhere, there was plenty of family drama after Erin accused her mother Mary of having an affair with dreamboat plumber Gabriel, only to discover that her Ma was taking English lessons and planning to go back to university. In another sweet moment, Mary’s husband Gerry told her that she could do whatever she put her mind to, leaving some viewers in tears.

The show’s creator Lisa McGee previously confirmed that season three would take place in 1995, so we can’t wait for even more 90s nostalgia (and surprise cameos) to take place in the remaining four episodes. Per the Radio Times, the optimistic era in Northern Ireland's turbulent history will see the gang look forward to a more peaceful future with the Good Friday Agreement of 1998.

Season three of Derry Girls is airing on Tuesday nights at 9.15 p.m. on Channel 4