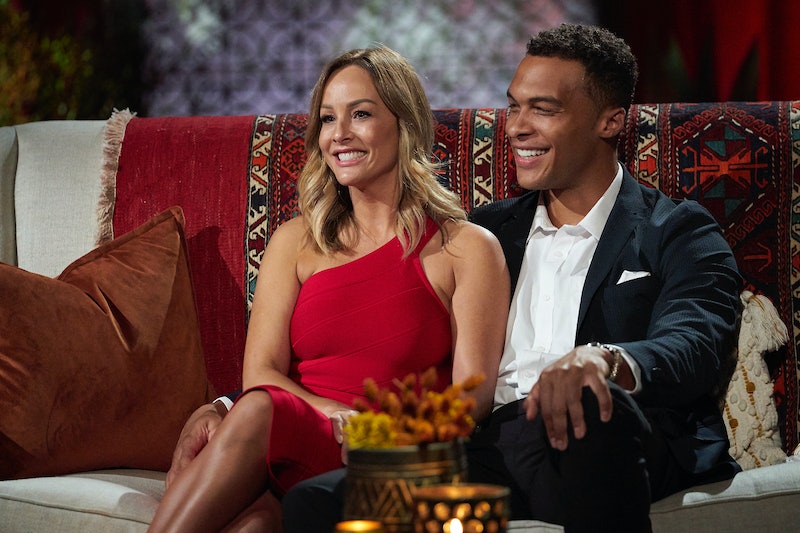 Clare Crawley's season of The Bachelorette was possibly the most dramatic one ever, and it seems like her breakup might be following suit. Shortly after the former Bachelorette revealed she was blindsided by the breakup announcement, E! News reported that Dale Moss allegedly cheated on Clare throughout their relationship with a woman he knew before going on The Bachelorette.

A source told the outlet that while Dale maintained that the woman in question was a "business" associate, "Clare has always been skeptical" of their relationship. "She never trusted the friendship and thought it was shady." The former Bachelorette reportedly became aware of the other relationship after hearing that the woman "has been talking to her friends about sneaking around with Dale," and learning that they were spotted having a candlelit dinner together while Clare was in Sacramento.

"It definitely looked like a date," an eyewitness told E! News about Dale's alleged night out with the other woman, adding that the pair left the restaurant hand-in-hand. "Dale looked really smiley and happy with her. They were laughing and flirting." While neither Clare nor Dale have yet commented on the allegations of infidelity, they have both recently released conflicting statements about their split on social media.

"Clare and I have decided to go our separate ways," Dale wrote on Instagram on Jan. 19, just five months after their whirlwind engagement last summer. "We appreciate the love and support we've received from so many people, but this is the healthiest decision for both of us at this time," he continued. "We strongly believe in leading with love and always remaining true to oneself ... We only hope the best things for one another."

He echoed those sentiments later that day, telling paparazzi that breaking up was "the healthiest thing for us right now." Though Dale didn't offer up many details about the split, he did touch on the rumors that the pair had been dealing with relationship troubles for a while. "We just got a lot going on in our lives right now," Dale said before emphasizing that he still has a great deal of love for his former fiancée. "Clare and I will be cool," he told reporters.

However, Clare appeared to contradict those sentiments with a statement of her own on Jan. 21. "I was made aware of a 'mutual' statement at the same time you all were," she wrote in a post on Instagram before implying that the breakup wasn't her decision. "Speaking for myself, my intentions with this relationship have always been very clear, so the truth is I am crushed. This is not what I expected or hoped for and am still trying to process this."

"Our relationship was not perfect but I can say that I was genuinely invested with all of my heart," Clare continued, though she didn't share any specific details about the problems the couple had been facing. "I may not have all the answers, but I do know this — I will continue to show up, stand by my word, and be committed to love."

Bustle has reached out to Dale Moss' rep for comment and will update this post when we hear back.