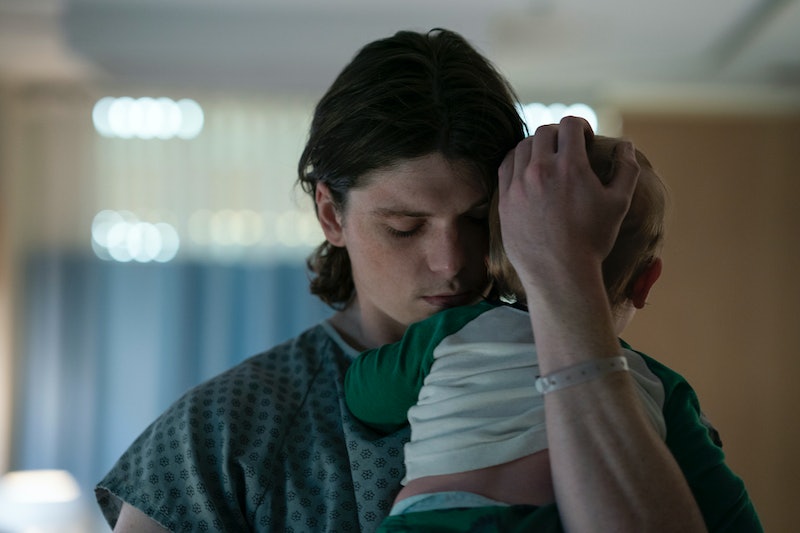 Spoilers ahead for Mare of Easttown Season 1, Episode 5. When it comes to Erin’s case on Mare of Easttown, that which is old is new again. Initially Dylan — the supposed father of Erin’s son DJ — seemed to be the most likely suspect for her murder. Erin’s father, Kenny, was so convinced that Dylan did it that he shot him. But after that, Dylan kind of fell off the radar; he was convalescing. In the May 16 episode, he’s once again front and center: his first order of business after being discharged from the hospital is to go destroy some evidence.

Since the night that Dylan and Brianna catfished Erin, the couple has gone their separate ways, though they’re not likely to get much physical space from each other. Brianna, facing assault charges for beating Erin up the night she died, is no longer leaving for college. Dylan doesn’t seem to have a plan for getting out of Easttown either, though it’s impressive how quickly he’s gone from maybe not ever walking again to walking around and being a jerk. This week, Brianna confronts him about something that’s been gnawing at her: On the night Erin died, Brianna woke up in the middle of the night to find Dylan missing from bed.

Dylan insists that he was feeding DJ. When that doesn’t work, he says he was smoking. And when that doesn’t work, he tells Brianna to leave. His alibi, always questionable, is now completely tarnished. But if Dylan wasn’t home, where was he? He could have been cheating on Brianna or conducting a late-night drug buy or going for an evening stroll. But separately we learn that Deacon Mark drove Erin from the woods to the park after she received a message from someone. The teen mom was hysterical, according to the Deacon. Could it have been a rendezvous with Dylan he unknowingly dropped her off at?

It remains an open question why Dylan would want to kill Erin in the first place. Kenny thought it was because Dylan resented Erin for having DJ, though it seems like Dylan’s parents were doing most of his childcare duties. To the extent that he hated the responsibility of fatherhood, killing Erin would only make it worse. Now, of course, we know that Dylan isn’t DJ’s biological father; as shocked as Dylan acts, it’s possible he already had his suspicions. When Erin wanted money for DJ’s ear surgery, for example, Dylan claimed his family had “done enough.” But done enough for what? If your kid needs ear surgery, no one’s done enough until the kid has ear surgery. Maybe he called Erin to the park to confront her about DJ’s paternity. More charitably, maybe he wanted to apologize for being a part of Brianna’s manipulation.

It’s hard not to be suspicious, though. Dylan has ingratiated himself with Erin’s friend, Jess, who agrees to destroy Erin’s journals with him. For an object of supposedly unwarranted vigilante justice, Dylan’s acting like a guy who has it coming. For instance, he knows about the gold heart necklace and instructed Jess to lie to Mare about that, too.

The alliance between Jess and Dylan is uncomfortable. Does she want to hide the same secrets he does, or is he preying on the fact that she’s a bit of an outcast? One thing is clear: whatever is in those journals, Dylan really doesn’t want Jess to read them. More than once he reminds her that they agreed to just throw them in the fire, but Jess slyly pockets a scrap of something — A paper? A photo? — to look at later. Dylan isn’t keeping up his side of the bargain either. When he sees an envelope of money marked “DJ’s ear surgery,” he smoothly conceals it from the others. Suddenly, Dylan is looking less like a deadbeat and more like a mastermind. Perhaps Dylan did kill Erin, if only by accident, and is now trying to cover it up.

The inclusion of Erin’s closest friend in these scenes is perhaps a sign that something less sinister is going on. What if Dylan and Jess aren’t hiding the truth of Erin’s murderer, but helping Erin hide the secret that she was already keeping? Mare said it best: “Teenage girls are f*cking sneaky.” But sneaky doesn’t necessarily mean shady. When Erin was alive, Jess helped her hold the truth that Dylan wasn’t DJ’s father. The bonds of friendship don’t dissolve at death. Maybe she’s still keeping Erin’s secret for her. Maybe Dylan, ashamed of how he treated Erin when she was alive, is finally trying to make things right.