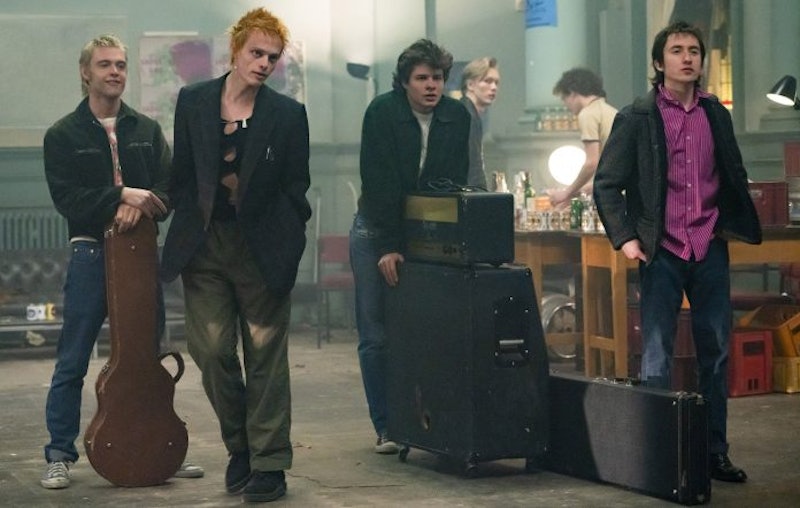 The upcoming six-episode series Pistol, directed by Danny Boyle, depicts the Sex Pistols’ rise to fame, and their prevalence amid the punk rock revolution. With an all-star cast that includes Game of Thrones’ Maisie Williams, Love Actually’s Thomas Brodie-Sangster, and Derry Girls’ Dylan Llewellyn, the hotly-anticipated drama is set to be a gripping watch. But is Pistol based on a true story? Find out everything you need to know, below.

Pistol is based on Sex Pistols guitarist Steve Jones’ 2017 memoir, Lonely Boy: Tales from a Sex Pistol. A recollection of the band’s experience in the ‘70s, Pistol focuses on a key three-year period, showcasing the punk group’s rise to fame and their eventual descent. Alongside Jones, famed singer John Lydon (typically referred to as “Johnny Rotten”), drummer Paul Cook, and bassist Glen Matlack were founding members of the Sex Pistols. However, Matlock was famously replaced by Sid Vicious in the late ‘70s.

The series will cover the inception of the Sex Pistols in 1975 and their trailblazing peak. Plus, the infamous 1977 BBC ban of the legendary God Save The Queen hit. The track was criticised for lyrics such as “God save the Queen and her fascist regime.” The band’s rapid burnout followed within a year after their American tour, per TimeOut. Tragically, Vicious overdosed on heroin and died, after allegedly murdering his girlfriend, Nancy Spungen.

Of the show, director Boyle notes: “This is the moment that British society and culture changed forever. It is the detonation point for British street culture. At its centre was a young charming illiterate kleptomaniac, a hero for the times, Steve Jones.”

The guitarist’s early run-ins with crime and youth remand centres are briefly touched upon, too. In the trailer, the band’s manager Malcolm McLaren (Thomas Brodie-Sangster) says: “I don't want musicians, I want saboteurs. Assassins."

Meanwhile, early Sex Pistols supporter Pamela Rooke, aka Jordan Mooney (Maisie Williams) and Vivienne Westwood (Talulah Riley), who collaborated with the band during their heyday, will feature in the six-episode drama.

Pistol will be available to stream on Disney+ on Tuesday, May 31.