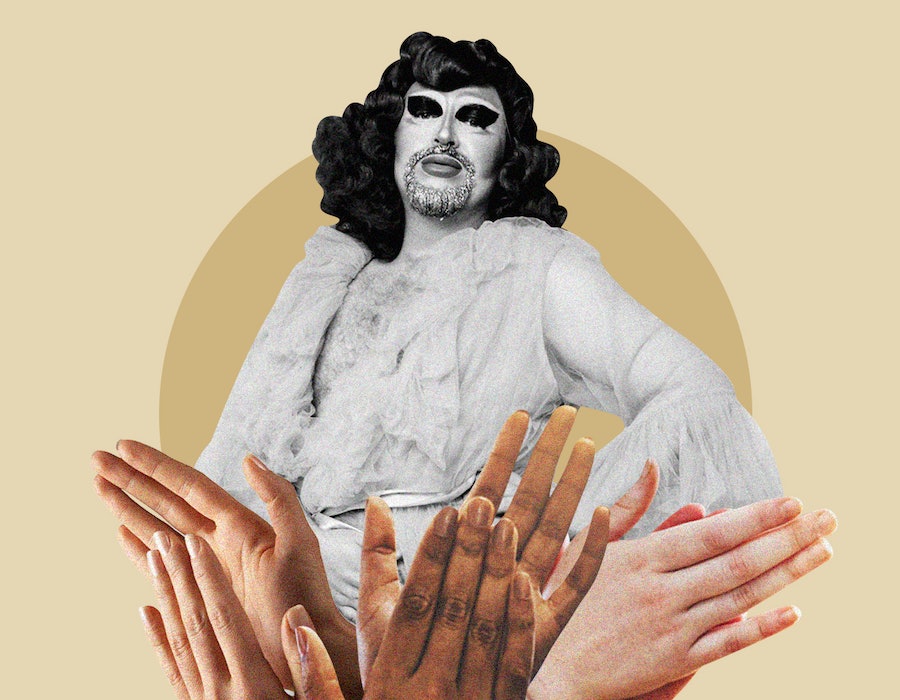 Welcome to Do It For The Applause, a series in which we ask performers, writers, business leaders, and public figures to think about the notion of applause and what it means to them. Today, we hear from journalist, author, and drag performer Tom Rasmussen.

Tom Rasmussen is terrible at accepting compliments, but amazing at giving them. “You smell really nice, what is it?” they ask me after we’ve sat down in a gloriously uncrowded bar ⁠— a rarity during the Edinburgh Fringe Festival, which is the setting for our interview. Tom has just come off stage after performing as Crystal, their drag alter ego, in The Bible 2. Their signature glittery beard has been wiped off, but still sparkles slightly.

Throughout our chat, I notice that Tom is full of compliments — for me, for their friends and family, their fellow drag performers and members of the queer community — but whenever I ask them to say something nice about themself, it’s a little trickier. Artists need to stay critical, they explain, noting it’s the only way to stay on top of your game. To be fair, it's paid off.

Tom has performed as Crystal in the wildly successful drag troupe Denim since their second year at Cambridge University. This year they published Diary Of A Drag Queen to a host of social media shout outs and much critical acclaim. Their writing has also appeared in the Guardian, the Independent, and Refinery29, where Tom's iconic £16k Money Diary proclaimed with unabashed irreverence, "extravagance is next to godliness." I ask them which of these accolades they're most proud of, and the answer takes me by surprise. “My parents,” they say, calling their mum and dad “unbelievably selfless.”

Diary Of A Drag Queen
Amazon

In my ignorance, I had never dreamt that a drag performer could be quite as humble as the one sitting in front of me. But Tom is used to that kind of thinking, and very eloquently explains just how wrong it is: “It's funny because you'd think drag was a really self-involved art,” they say. “And you'd think of performers as really self involved. And you probably think I'm really self involved. But really the reason to do it is to show that there's another way to be ... And hopefully that makes people feel good.”

But, of course, there’s a difference between the drag performer and the queen herself. In contrast to Tom, Crystal has no qualms in accepting applause. The 108-year-old Russian redhead has a razor sharp tongue and confidence by the bucketload. In The Bible 2, her first ever solo show, she oozes self assurance. There’s singing, audience participation, costume changes, nudity (often in conjunction with the costume changes), and a fair bit of splashing around in a paddling pool. “The persona was always built to be the most fabulous. And I don't mean fabulous in terms of, like, sequins,” Tom explains. “I mean fabulous in terms of Crystal [having] done every single thing in the world. So, if you say, ‘oh, I just saw this film,’ Crystal will say, ‘oh, I wrote and starred in it.’ It's a way to insert yourself when you've been erased quite a lot. And so it's just such power.”

The show is a visceral, life-affirming experience, and one that’s met with huge rounds of applause, a lot of whooping, and a standing-ovation-slash-singalong at the end. And Crystal expects nothing less — she revels in the adoration so unashamedly that, in fact, "she's above it," Tom explains. She doesn't need your approval, which is precisely why the audience approves as enthusiastically as it does. But what about Tom? How do they feel about the adoration? As you might expect, that's where things get a little more complex.

Queer people's. When you're making queer work, it can be really scary, because you desperately want to represent people, not upset people, and be sensitive to what they've gone through. So, when queer people come to the show, and they're like, "Oh my god, loved it," that feels amazing. And my mum and dad’s applause means the most, too.

Standing ovations, probably. Yeah, I don't really care about online stuff. I mean it's just a false economy or whatever isn't it? It's nice, sure. I understand if someone does [like that stuff], that's fine. But yeah, a standing ovation feels pretty amazing. To have got people to their feet, that's an amazing feeling.

My favourite type of compliment is a thoughtful one. Where someone's not just been like, “Love ya beard!” But when they've been like, “I read this thing and I identified with it” or “I loved it” or “I cried” or “I laughed” or whatever. That's an amazing kind of compliment. Or laughter is a really good compliment. When you make someone laugh.

Why do you think so many of us find it difficult to accept praise?

I think it's cultural, probably British. Which is lame and boring. Like, fucking get a grip. Because in America people take compliments. When I've been there, it's like, really mood. I think it's that.

And, I don't know, wanting to be internal? I don't know why, I couldn’t tell you why. But I could probably tell you why certain marginalised identities find it hard to take compliments. It's because it's hard to know your worth. And so, when you don't know your worth, it's hard to believe a compliment from someone. So like, my mum, bless her. She is beautiful, but she doesn't think she is, and she can't take a compliment about her appearance. But she's very beautiful and the most wonderful person ever. So I think it's about a lack of ability to know what your self worth really is, I would say.

Which person in your industry do you think deserves applause or more applause right now?

It's always going to be the same answer because of the way the fucking world is: queer people, people of colour, fat people, women, trans women especially, with media climate right being so completely hostile right now. It's awful. And so unfounded. And disabled people. And basically everyone who isn't cis, white, male, middle class, and able bodied. And also anyone who is just having a hard time. Unless you're an incel or a Nazi, a Right Winger or, like, a Tory. Then you deserve to have your applause taken away. Oh, and poor people deserve more applause right now! Working class people, common people, poor people. That would be the ultimate. Because I think when we talk about marginalisation, we completely miss out those experiences when they're among the working classes. And I think culture still treats the working classes as a mass and those who have broken through, whatever that means, as a "special one." And when we talk about intersectionality, we miss class out so much. And I actually think, in this country, class is the line. Class is the thing that defines those experiences that we're talking about. Class is drawn on race lines, gender lines, sexuality lines, ability lines. So, actually, socialism needs a bit of an applause right now.