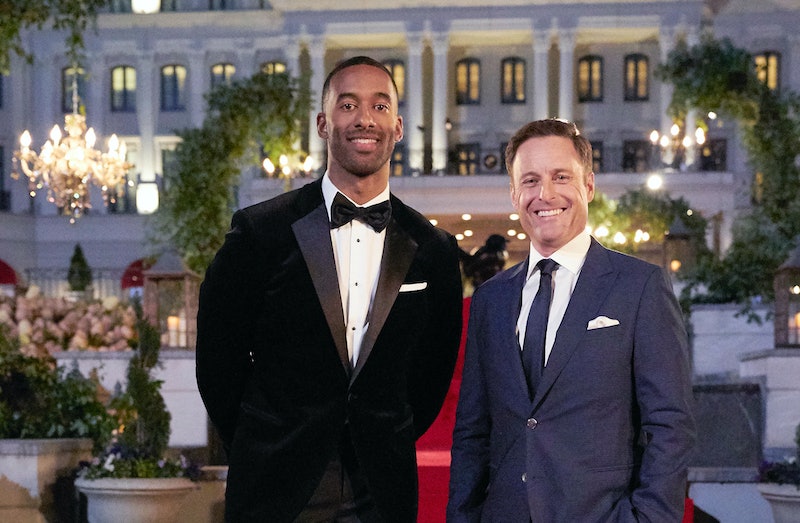 Matt James may be a little more cautious than past Bachelors about getting engaged. Not only did he admit to Chris Harrison that he'd never been in love before the show, he also had less time than usual to get to know his contestants. According to Variety, filming for Matt's season was shorter in order to allow time for the women to quarantine and get tested for COVID, leaving Matt with about six weeks to fall in love instead of the usual eight.

Going from never being in love with anyone to getting down on one knee in a handful of weeks is quite a jump, and it seems to be something Matt struggled with. In a preview, he says "going deep and sharing who I am, what I'm about, and what I've been through" has been hard for him, particularly with the weight of his mother's "broken marriage" hanging heavy on his shoulders.

Nonetheless, Matt is holding a ring in the promo for the season. "Love causes you to do things that you wouldn't normally do," he says. "I've got this beautiful diamond that represents so much more than you could ever imagine."

When Matt's BFF Tyler Cameron visited the resort, he got a feeling that Matt would end up down on one knee. "Matt seems genuinely happy, and you know, I think we're going to get the end that we all want and have been missing for a little while," Tyler said in a recent vlog.

That ending we've been missing is a proposal that sticks. Peter Weber proposed to Hannah Ann Sluss, but they broke up shortly afterward. Colton Underwood didn't propose on his season at all. And though Arie Luyendyk Jr. proposed to Becca Kufrin, he later dumped her and married his runner-up Lauren Burnham instead. There hasn't been a Bachelor who got engaged and stayed with his original choice since Sean Lowe in 2013.

So if Matt does propose, who will it be to? There are a few clues that point to Rachael Kirkconnell. In January, Bachelor fans noticed that Matt had "liked" one of her Spotify playlists. Chris Harrison also said that Rachael wasn't at the Women Tell All, which traditionally only excludes the top two women. And Matt and Chris have both defended Rachael after reports surfaced that she attended an "Old South" party on a plantation and liked racist posts on social media. (Rachael has since apologized for her actions and Chris apologized for defending them during a controversial interview with Rachel Lindsay).

"I would say that you have to be really careful about what you are doing on social media. Rumors are dark and nasty and can ruin people's lives," Matt told Entertainment Tonight when asked about Rachael. "There's a lot of stuff going around about the women that were involved in the show. I would just give them a chance to kind of have their piece … Everyone has a story, and I would just be receptive to that."

That was before Rachael released a statement regarding her actions, so it will be interesting to see if Matt has anything more to add. And if he did get engaged to her (or anyone else), fans are going to want to know if they're still together now.

More like this
Hannah Ann Got Engaged 3 Years After 'The Bachelor' & The Proposal Was Dreamy
By Grace Wehniainen
This 'Bachelor' Contestant Had The Best Reaction To Wearing The Same Dress As Another Woman
By Grace Wehniainen
A Guide To All Of Zach Shallcross' 'Bachelor' Filming Locations
By Brad Witter
The Bachelor’s Greer Blitzer Apologized For “Uneducated, Ignorant” Past Tweets
By Brad Witter
Get Even More From Bustle — Sign Up For The Newsletter
From hair trends to relationship advice, our daily newsletter has everything you need to sound like a person who’s on TikTok, even if you aren’t.