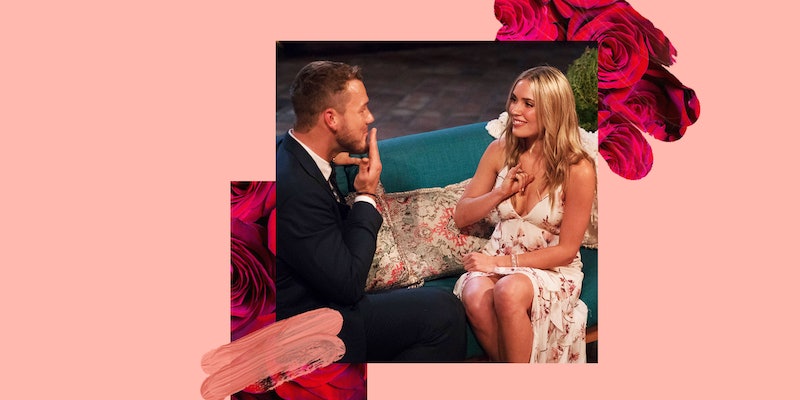 For all the talk of the "right reasons," there aren't actually official rules for being on The Bachelor, as former producer Elan Gale once said — just heavily encouraged suggestions. But after Colton sent his final two contestants home in favor of pursuing his favorite, Cassie, who had just dumped him, it's safe to say Colton deviated from the usual Bachelor finale playbook. After all that, it's understandable that Colton and Cassie didn't get engaged on The Bachelor — Colton is far from the first Bachelor to skip a trip to Neil Lane. What's more interesting is how the show, despite touting engagement as the true measure of success, decided to treat their coupling as a happy ending in its own right.

Out of 23 seasons, Colton is the ninth Bachelor to not get down on one knee in the finale. Brad Womack sent both his finalists home and left the show alone, but the other seven Bachelors, like Colton, chose to keep dating their winner without the looming pressure of marriage hanging over their heads. With the exception of Season 18's infamous Bachelor Juan Pablo Galavis, though, all these non-proposers were from the earlier seasons of the show (Seasons 1 to 10). It makes sense that by the time Galavis made the much-maligned decision not to propose to his winner, Nikki, audiences were primed by the six prior seasons ending in engagements to treat a ring as the only accepted outcome of the finale, and they revolted accordingly.

So, why, then, are we not outraged that Colton isn't engaged, when that's what he had been saying he wanted all season long — to the point where drama about which women "weren't ready" seemed to shake him to his core? The circumstances here play an important part. Unlike Juan Pablo, who chose not to propose to Nikki and even refused to say he loved her, Colton says he's not forcing a proposal and will compromise because he wants Cassie and loves her no matter what.

"I’m willing to do anything and everything, because that’s how much I love Cassie," Colton said before he prepared to ask her for a second chance on the finale.

The fact that Cassie relented and appeared excited to be back with Colton is a surprising turn of events given that during Fantasy Suite week, Cassie told her father she wasn't sure of her feelings. She said she liked Colton, but she wasn't sure if she loved him and didn't feel she had enough time during filming to parse those feelings out, so she left the show, prompting Colton to make a concession regarding his "marriage or nothing" deal-breaker.

The couple is still taking things slow. During the second part of the live finale, Colton told Chris Harrison that they've talked about engagement, but they're still just trying to get to know each other. "We still have a lot of room to grow," he said. "We’re enjoying dating right now, we’re not going to rush anything." That includes moving in together, which the couple is also not doing yet. Instead, Colton moved to LA, which is a short drive from Cassie's hometown of Huntington Beach. They plan to spend every day together, just building their relationship.

Colton may not have done things the way, say, Bachelor golden boy Sean Lowe did them. But an engagement in the finale isn't a guarantee that a couple will last, either. Arie Luyendyk Jr. from Season 22 and Jason Mesnick from Season 13 both proposed in their finales, only to pretty quickly realize they picked the wrong person the first time around.

There's no denying Colton knows he wants to be with Cassie, and that's affected the way he's been received by the show and the fandom. The way he broke out of the show's constructs — both literally by jumping a fence, and figuratively by not proposing — feels new. And, in a key difference from Juan Pablo's season, it also doesn't really feel like Cassie "lost" by not getting a ring at the end of the show. Because so much focus was on whether she and some of her fellow contestants were ready for marriage, it became very obvious to anyone watching throughout the season just how much the show's premise can hinder actual success in a relationship. It's something most fans know deep down, but it isn't often acknowledged by the show, the contestants, or the Bachelor himself. This season, it felt like a fourth wall had been broken as Cassie and Colton discussed their options for a future together on camera.

The show is filmed in just two months, and that's not a lot of time to get to know someone. For Colton, it was enough time for him to determine that he loved Cassie. And for Cassie, it was enough time for her to develop feelings for Colton that she just wanted more time to explore. Starting out by being clear about how they're dating gives this couple the chance to get to know each other without the pressure of fans asking when they'll be turning an engagement into a wedding. They get to move at their own pace, and that's important for the success of any relationship — engagement or not.