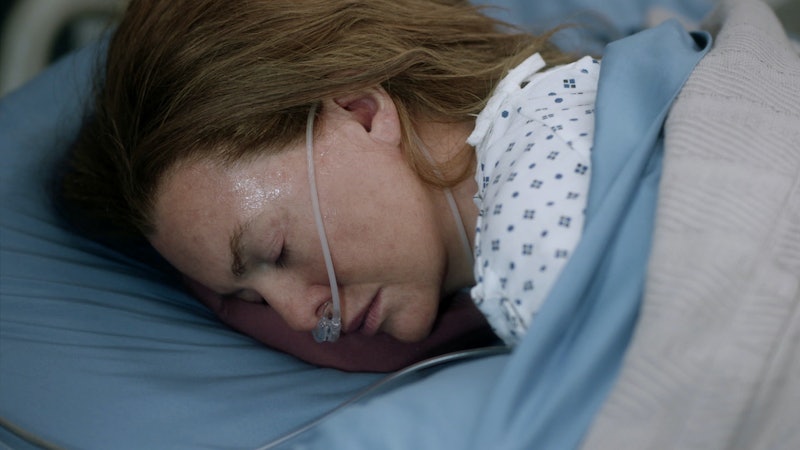 Spoilers ahead for the Grey's Anatomy Season 17 winter finale. After lulling fans into a false sense of security, the Grey's Anatomy winter finale ended with a grave image: Meredith Grey on a ventilator. Having used her last moments of consciousness trying to resuscitate a coding patient while on a suspected "COVID high," she couldn't have possibly gotten to that state in a more Meredith way either. But now fans have to face the possibility that Meredith really could die.

As Teddy explained to her fellow docs in the episode, "Meredith's lungs are at a breaking point," leading Richard, as her power of attorney, to make the difficult "last resort" call to put her on a ventilator. The good news? Teddy pointed out that despite bleak initial statistics, "more and more patients are surviving after they go on a vent."

Grey's EPs Meg Marinis and Andy Reaser didn't paint such a sunny picture, however. "She has COVID, and she's in the hospital with a disease that might kill her," Reaser explained to Bustle. "Hundreds of thousands of people tragically, and kind of senselessly, are dying of this disease, and if this show has proven anything over 17 seasons, it's that anything is possible. It's not a foregone conclusion that she's just going to walk away from this."

As Meredith's fate continues to hang in the balance, fans can likely expect to see more of her magical beach scenes in the future, though it remains to be seen if anybody else will join her. So far, viewers have been treated to the epic returns of Grey's alums Patrick Dempsey (as Derek Shepherd) and T.R. Knight (as George O'Malley), with OG cast members Bailey and Richard both making appearances as well. Whether or not there are any newcomers on the horizon, showrunner Krista Vernoff has at least promised that there are more Derek scenes to come.

As far as when Meredith's late husband will reappear, Reaser teased that they're "going to maximize the emotional and dramatic impact," true to Grey's form, of course. Added Marinis, "He appears at very specific moments intentionally."

Will one of those moments be to welcome Meredith to the afterlife? Fans now have an excruciatingly long wait until Grey's returns on March 4 to worry. To borrow a quote from Cristina Yang, "Somebody sedate me."

More like this
'Grey's Anatomy's New Intern Got Advice From Dr. Bailey Herself
By Grace Wehniainen
This Episode 6 Moment Foreshadows Viserys' Fate On 'House Of The Dragon'
By Grace Wehniainen
Nicola Coughlan Shared A Lady Whistledown Excerpt From ‘Bridgerton’ Season 3
By Grace Wehniainen, Alyssa Lapid and Sam Ramsden
A New 'And Just Like That' Table Read Pic Confirms A Key Character's Return
By Jack Irvin and Grace Wehniainen
Get Even More From Bustle — Sign Up For The Newsletter