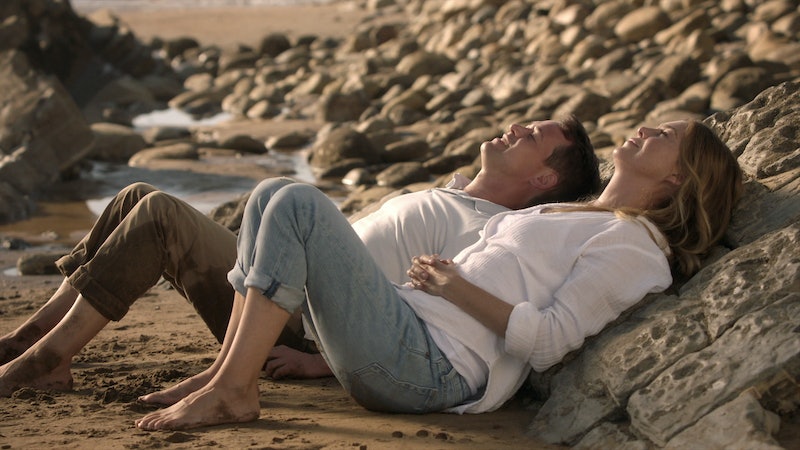 Just four episodes into Season 17, Grey's Anatomy has already pulled off two epic fan favorite returns: first with Patrick Dempsey's Derek Shepherd and most recently with T.R. Knight's George O'Malley, both of whom died in previous seasons but reunited with Meredith on the beach in her COVID-fueled dream state. And they may not be the only characters set to come back.

Following a season cut short by coronavirus, the Grey's team is "packing [in] as much story as possible," and executive producer Andy Reaser teases each episode will end "with a cliffhanger or something that is profoundly emotionally satisfying." That means "anything is possible" in regards to other surprise cameos. "The beach is going to continue to be a place of light and joy, and I think we're all going to need to continue to be there with Meredith," EP Meg Marinis teases. And with the added arrivals of Richard Webber (James Pickens Jr.) and Miranda Bailey (Chandra Wilson) in the Dec. 3 episode, characters from the land of the living are now open to appear, too. "It opens up possibilities as far as who [Meredith] can be with [on the beach] and how she can be with them," Reaser adds.

Below, he and Marinis weigh in on George's return, a potential Cristina Yang cameo, and whether or not it's possible that Meredith actually could die this season.

With 16 previous seasons to draw from, why do you think George was the right person from Meredith's past to bring back now?

Marinis: It's George. It's Meredith and George. Obviously there's Meredith and Cristina as well, but George played such a special place in her life. She was at his side at the very last moments of his life. [And I think it's] really interesting that she is sick in a bed and shaking with COVID, and he is the person that she sees. George is also someone who always filled her with so much joy. If you look at past seasons, Meredith and George were always laughing, always smiling, always having fun. Their friendship was a huge light in the show, so as she's escaping to her dreams, that's someone that she's going to picture.

Reaser:. I also think he's the perfect person to show who Meredith was able to become after he died. His life got cut short, and it was really tragic, but she's gotten to do so many things since then. To be able to have scenes with somebody from a time in her life when her life looked very different, I think was a lot of fun and gave them a lot to talk about.

Showrunner Krista Vernoff credited you both with the idea to bring back Richard and Bailey. What made you think to do that?

Reaser: Julie [Wong], who wrote the episode, decided to have Richard by the bed talking when he decided to give Meredith the treatment. We were going to end there, [but then] I had the idea that it was just a shame to not have Bailey and George together, even if they can't talk to each other because of the story mechanism, just for everybody to be able to see all of them together. Bailey loved O'Malley. So I called Krista, and Chandra [Wilson, who plays Bailey] went down to the beach and sat with them. We got that lovely last shot of the four of them together, all in very different places right now in their lives, but it just seemed the right way to end the episode.

What can you say about what the beach represents, now that we know living people can show up there, too?

Reaser: The beach exists in this space where, depending on the way you watch the show, you might feel like Meredith's in a magical afterlife kind of place. If you are a cold and clinical person, you might think this is purely manifesting in her mind. We've been very careful to play this in a way that doesn't tip one way more than the other. Not that we won't going down the road, but it's a space that can mean a lot of things. And because she's seeing people and hearing people and talking to people that may or may not be there in reality, we really want to preserve the mystery around it. So we're careful not to define it in definitely real versus definitely not real.

When George pointed out to Meredith that Cristina is still alive, was that perhaps a bit of foreshadowing that she could return in the future?

Marinis: I don't think you can have a scene with characters like Meredith and George without bringing up that core group from the beginning. [But] I don't think it's intended to shine a light on any future storytelling. That group of interns spent every waking moment together, and no friendship existed in a bubble. Each friendship was special, and I think it was only organic for them to bring Cristina up.

Reaser: This isn't a show where someone leaves and just never gets mentioned again. We're always thinking of ways to reference people who have come and gone, whether they've passed away or are still alive. Jo still talks about Alex, Meredith gets texts from Cristina regularly, so it's something the show has been very intentional about. We love all these characters and we love the people who play them, so we want to keep that sense of real involvement in one another's lives, even if cast members have moved on to other things.

Meredith could lie next to George in the sand, but thus far, she hasn't been able to get close to Derek. How can viewers expect to see his appearances evolve throughout the season?

Marinis: The difference is that Derek is and was the love of her life, so their distance the last time that he appeared in Episode 3, as opposed to Meredith and George on the beach, was very intentional. I'm scared to say too much more. [laughs]

Reaser: Ever since losing Derek, Meredith has really struggled with being able to move on. Derek is somebody that, if you think about her subconscious, she spent so much time saying, 'Am I ever going to be able to move past this?' So it makes sense, sort of poetically, how Krista designed that to have them not be just all up in each other's business. It's something that we intend to play with going forward, and as far as when he's going to appear, we're going to maximize the emotional and dramatic impact.

Some fans are concerned that Meredith might die this season. Can you shed any light on that?

Reaser: I mean, it's possible. She has COVID, and she's in the hospital with a disease that might kill her. Hundreds of thousands of people tragically, and kind of senselessly, are dying of this disease, and if this show has proven anything over 17 seasons, it's that anything is possible. It's not a foregone conclusion that she's just going to walk away from this.

More like this
A New 'And Just Like That' Table Read Pic Confirms A Key Character's Return
By Jack Irvin and Grace Wehniainen
Netflix Reveals First Look At Wednesday In The 'Addams Family' Spinoff Series
By Bustle Editors
'Grey's Anatomy's New Intern Got Advice From Dr. Bailey Herself
By Grace Wehniainen
Nicola Coughlan Shared A Lady Whistledown Excerpt From ‘Bridgerton’ Season 3
By Grace Wehniainen, Alyssa Lapid and Sam Ramsden
Get Even More From Bustle — Sign Up For The Newsletter