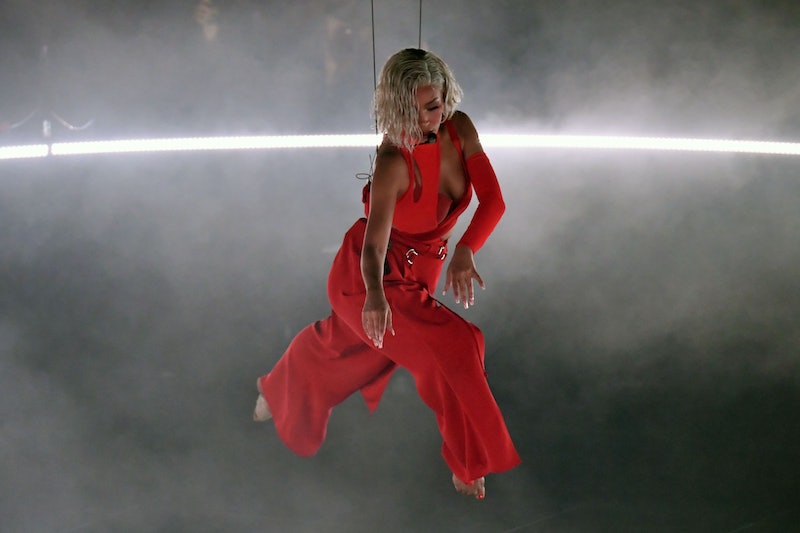 Doja Cat might just be the poster child of the 2021 MTV Video Music Awards. Who else can say they’re hosting, performing, and nominated all in the same night?

After walking the red carpet in a look by Andreas Kronthaler for Vivienne Westwood, the 25-year-old opened up the evening with a short monologue celebrating MTV’s 40th anniversary. But her big moment came during her highly anticipated performance, when the singer flew out over the audience in a wire harness, belting “Been Like This.” After gracefully landing on the stage, she danced her way through “You Right.”

Doja Cat is the first host in VMAs history to be nominated for Video of the Year in the same night. The singer’s music video for “Kiss Me More” featuring SZA earned her one of her five nominations, including Artist of the Year. All this comes after her success at last year’s ceremony, when she was named PUSH Best New Artist. She also performed that year, singing a compilation of “Juicy,” “Say So,” and “Like That.”

Fans learned that Doja Cat would perform at the awards show weeks ago, but her hosting duties were only announced on Aug. 25. She told People that she got the offer in the middle of a rehearsal. “I just remember being like, ‘No, there’s no way, I'm not doing this. I'm too tired,’” she said. “And the people behind everything were so understanding and were like, ‘Hey, we'll move this, we’ll do whatever we have to do to make this work.’”

Of course, Twitter had opinions about Doja Cat’s time onstage. Check out the best memes and tweets about her performance below.

More like this
The 'Love, Lizzo' Harry Styles Scene Is Just 1 Moment That Made Fans Feel Seen
By Brad Witter
Mariah Carey Is "So Proud" After Her Kids Joined Her In The Thanksgiving Day Parade
By Stephanie Topacio Long
Kim K Is Putting Kanye’s Memorabilia — Like Grammys & Clothes — In A Vault
By Jake Viswanath
The First Night Of Adele's Las Vegas Residency Was "Highly Emotional"
By Brad Witter
Get Even More From Bustle — Sign Up For The Newsletter