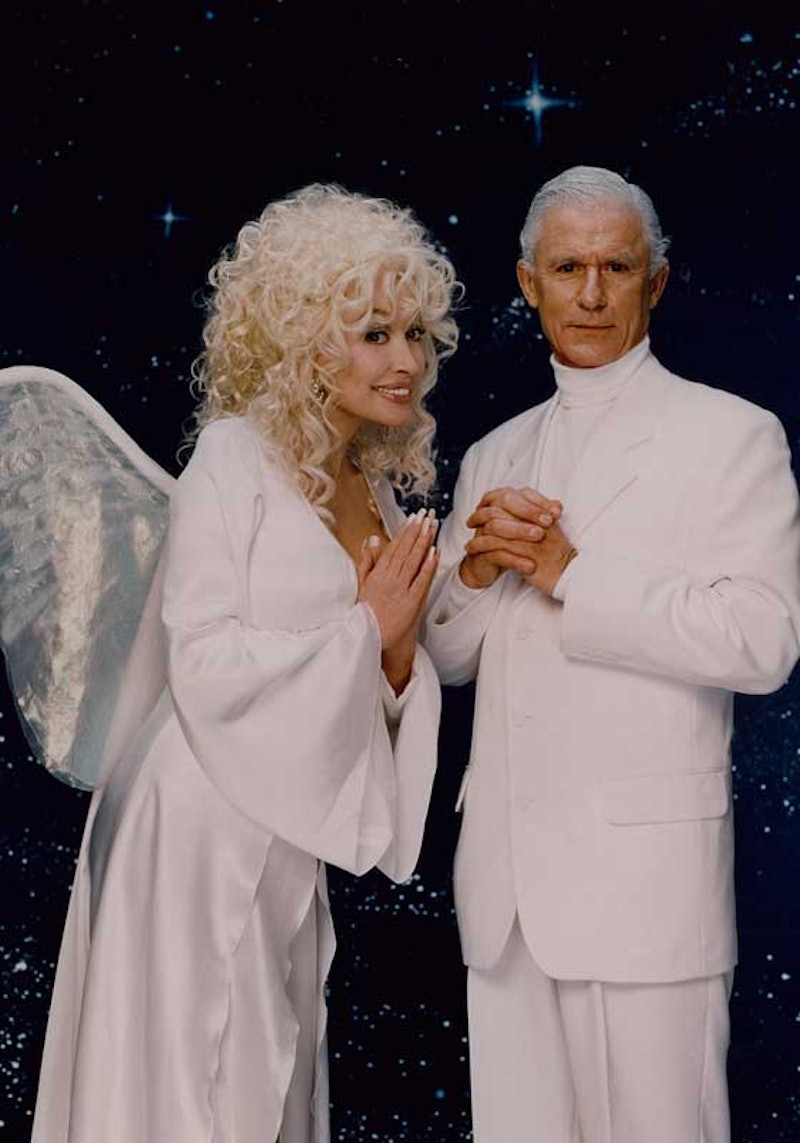 In many ways, Dolly Parton is already a full-on guardian angel: a prolific, glitter-coated deity who helped bring the COVID-19 vaccine to the masses and also gave us “Jolene.” But in Unlikely Angel, the criminally underrated, made-for-TV Christmas movie, she quite literally becomes one. Twenty-five years later, the story of Dolly’s ascension holds up — and it might just be what you need this holiday season.

Even before Parton’s character earns her wings, she’s an icon. Ruby Diamond wears skin-tight leather skirts to her nannying job, plays the guitar without a strap, and can mesmerize an entire bar of wasted, middle-aged men. Still, she’s not in the best place at the start of the film. Diamond performs at a gross bar, catches her boyfriend cheating on her, and then promptly dies in a car crash after a deer runs into the road. But this is just the beginning for her.

The now-deceased singer almost ascends to heaven’s pearly gates, but is stopped by Saint Peter (Roddy McDowall), who tells her point-blank that if she hadn’t saved that deer’s life, she would’ve gone straight to hell. Diamond, he says, spent her entire life saying and doing anything she wanted, without regard for anyone else. (While this is the kind of life I strive for personally, it is not the kind that gets rewarded biblically.) Rather than apologizing or feeling shame, Diamond laughs it off. She knows she hasn't been perfect, but who has? Thankfully, Saint Peter offers Diamond a chance to make it into God’s kingdom — if she can help mend a broken family, the Bartilsons, before the clock strikes midnight on Christmas.

Diamond gets dropped back down to Earth, disguised as a nanny. Upon arrival, it’s immediately clear that her assigned family is not in great shape. The father, a recent widower, totally ignores his children. The daughter, Sarah (Allison Mack) is actively rebelling, and the son, Matthew (Eli Marienthal) is lost in grief. Diamond brings some much-needed levity to their home, baking cookies and singing holiday tunes and even flirting with the dad — even though she was specifically instructed not to. (Every time she gets horny, the heavens shake the Earth, or Saint Peter drops a bible near her to remind her to stay on course.)

Christmas movies are often imbued with some kind of moral message. It’s a Wonderful Life is about appreciating what you have; Miracle of 34th Street is about embracing the magic of childhood; Dr. Seuss' How The Grinch Stole Christmas is about being kind to those who are different from you. The lesson of Unlikely Angel — a movie about coping with loss — feels similarly profound, especially right now. There are no Scrooges or Grinches, only the lingering effects of grief. It feels oddly radical to show something so simple, so common, as a family struggling to cope with loss. In such circumstances, even the most well-meaning families go through a rough patch, and it can be difficult to see a light at the end of the tunnel — especially given that most people don’t have a Dolly Parton to show them the way out.

You might come to Unlikely Angel for the cheesy CGI and the Christmas cookie decorating scene, but you’ll stay for the tender moments that make the Bartilson family feel so real — well that, and the scene where Dolly Parton sings with a choir of angels.

More like this
Laura Dern Said “Cultural Awareness” Made Her Rethink This 'Jurassic Park' Fact
By Grace Wehniainen
The 'Hocus Pocus' Sequel Finally Has A Release Date & It Makes Total Sense
By Shannon Barbour and Radhika Menon
What Does Doctor Strange’s Third Eye Mean?
By Arya Roshanian
What’s New On Netflix: A Victoria Justice Rom-Com & The Return Of David Letterman
By Arya Roshanian
Get Even More From Bustle — Sign Up For The Newsletter