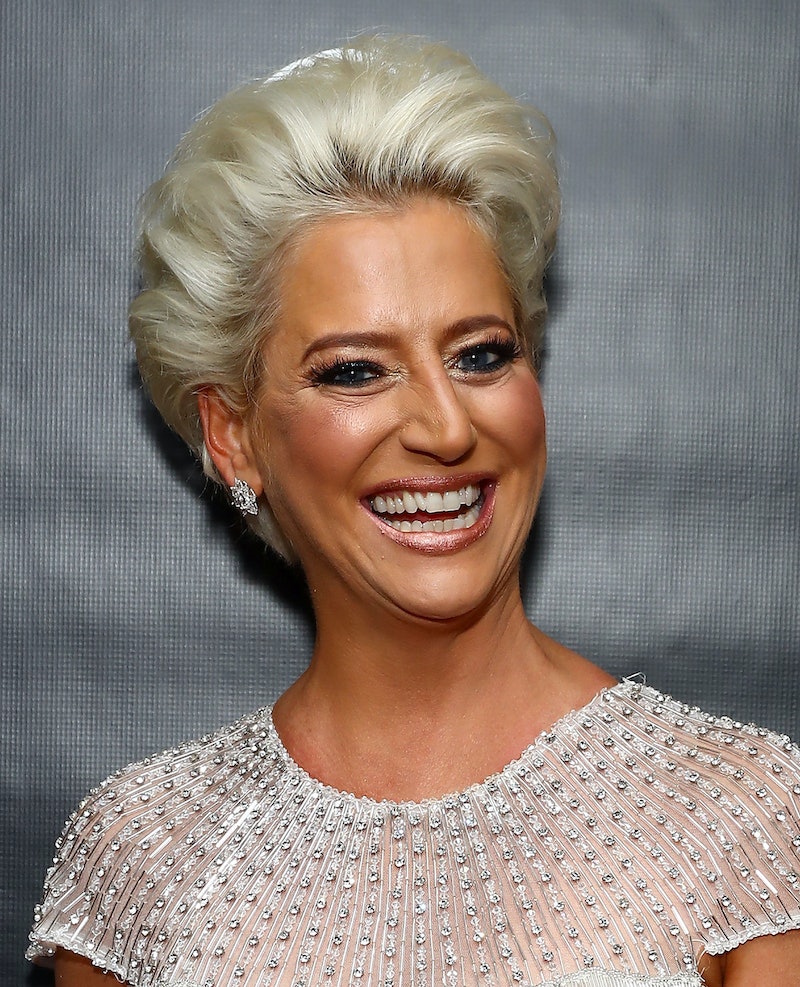 While hosting the Real Housewives of New York City cast at her Berkshires estate in Season 8, Dorinda Medley reached her breaking point. She’d gone above and beyond to ensure her friends had a good time, only for them to throw it back in her face. After Dorinda heard Ramona Singer and Luann de Lesseps poking fun at the “non-birthday” birthday cake her mother had bought, she’d had enough, tearfully delivering one her most iconic RHONY lines: “I decorated, I cooked, I made it nice!”

The quote soon became a meme, but for Dorinda, it was more than a fleeting moment in Housewives history. “I think ‘make it nice’ is a sentiment. It applies to how you do stuff in your life and the effort you put in and how you feel about the person you’re trying to make it nice for and putting your best foot forward,” Dorinda, who left RHONY after Season 12, tells Bustle. “That was my frustration when you saw it on the show, when I was like, ‘I made it nice!’ because sometimes you’re fed up when you do it and someone just doesn’t get that.”

More than five years later, Dorinda has turned the line into a book with the release of Make It Nice, out now. The collection of personal essays chronicles Dorinda’s life experiences, reflecting on love, loss, motherhood, and, yes, reality TV while using the wisdom she’s gleaned along the way to help readers “make it nice” in their own lives, too. “What I say in the book is to just do the right thing. How is it going to make other people feel? If it’s going to make other people feel bad, why bother?”

In the spirit of the book, we gave Dorinda 10 common dilemmas and asked how she’d “make it nice.” Read on for her answers.

My sister is mad I don’t want to plan her bachelorette party. What should I do?

A lot of times when things are unsaid, people’s minds run wild and they don’t understand why you don’t want to do it. So I think what you do is explain why you don’t want to do the bachelorette party. Then, make sure you assign a couple people who could probably do it better than you. Say you have someone who you know would love to do it and you’re fully supportive of that.

I need to politely tell my distant relative that they aren't getting an invite to my wedding.

Depending on what the circumstances are — budget, numbers, your relationship — I think you have to face it and call them up, and you need to go through it step by step. I always do this when I have parties: “There’s two people throwing this, so I have to take into consideration my partner’s invite list as well.” Or you just say, “I don’t feel close enough to you right now, and I don’t feel we have the kind of relationship where I think you would really want to be at this wedding.” I think the key is communication.

I drunk texted my ex and told them I wanted to get back together. What now?!

We’ve all been there! You have to not text again. No more texting. I think what people do a lot of times is they text something bad and then they can’t help themselves and keep on texting. You’ve got to pick up the phone right away, first thing in the morning, and say, “Oh my god, I’m so sorry about that text. I was having a moment. I drank a little too much and I was feeling reminiscent because I really did enjoy our time together. Of course I still miss you sometimes, and god knows when I have a couple martinis that feelings come up. But it was the martinis talking, it wasn’t me.” Say it, forget it; write it, regret it.

I matched with my co-worker on a dating app.

What I say to that one is awkwaaard. I’m old school, so people may not like my answer. Ignore it; you’re looking for trouble. Quit your job if you really want to go through with it.

So what? You know what I say in situations like that? Keep it movin’. It probably will never come up, and it may make the person feel good for a moment. Just block that person so you don’t do it again.

I was gossiping about a mutual friend and they overheard. Should I say anything?

That's a question I ask all the time! You know I have been known to be “Dorinda Meddler.” That one makes me sweat. Let’s just talk about the moment when you realize they’re overhearing it and you try to shift gears, and it’s too late. You’ve got me on this one. Cry? Say you were embellishing? Blame it on the martinis? The weird thing is you want to betray the person you were gossiping to immediately. Like, “He’s such a jerk, he’s the one who started it.” Just get louder and more convincing that they’re the one who started it. Mediate by being the stronger character, like you weren’t the initiator.

My friend won't stop complaining about their partner but doesn't want to break up with them.

That happens to me all the time. I’m really not a person who does that. I’m an internal decision maker, and a little bit of a black and white thinker. When it’s over, it’s over. What you should do is next time you see them, record them and play it back and say, “Is this pleasant? Does it sound like you want to be with this person? I’m going to play it back, and you tell me if you sound like a person who’s happy.” Forget about the bigger picture of, like, “I love him” because “love” is just a word we throw around. It’s a verb. Why would you spend time with people that make you unhappy?

I admitted I never liked my friend’s ex when they broke up, but now they’re back together and the person knows how I really feel about them.

That happened to me not so long ago too, and I’ll tell you how I resolved it. It started when the person said, “Well, you never liked me,” and I was like, “I never liked the way you treated my friend. And my friend didn’t like the way he was being treated. So I was just being protective of my friend. Now, if you fault me for that, and if it’s untrue and he exaggerated, I apologize. But I cannot like or understand a person who’s not treating someone I love well. It was truly a sign of loyalty, and I hope it’s changed. I hope I don’t have to hear these stories anymore, and we can go forward from here. Best of luck. See you next Sunday.”

I developed a platonic bond with my friend’s significant other while they were dating, but they just had a contentious breakup.

I’m a fiercely loyal person, so when I break up with someone, I take all my friends with me. I think it’s my Italian side. I broke up with [John Mahdessian], and if I saw him out with one of my girlfriends or one of my friends, I think it would be just a little odd. People can do what they want, but when people do that, I think it’s more of a message of how they value your friendship.

But if you’re not like me, a sort of very black and white Italian, I would say then that you could at least give the benefit of the doubt to your friend and ask if it’s OK. If they say it makes them uncomfortable and hurts their feelings, then respect that.

I hooked up with someone I knew my friend was also interested in.

Well, you just shouldn’t do that! That’s naughty. You’ve got to be respectful of that. If you told me you were interested in someone, and we were great friends and then I went after them, I don’t think that’s very nice, do you? I never get myself in those situations where I even have to ask this question. If my friend Mona says, “Hey, I really like this guy so-and-so, and I’m going to…” I don’t bother with that. In fact, I facilitate it.

My best friend is constantly trying to bring a new person they really like into our longtime friend group, but nobody else enjoys the person’s company.

Oh my god, give them a chance. A lot of times people make snap decisions. Whenever there was a new person on Housewives, I’d try to make them feel comfortable and give them the benefit of the doubt. It’s very hard to crack a group. Just like you saw on Housewives, a new person would come on and some people would just not be nice, and I’m like, “What are you doing?” It is so hard to be around these deep-seated relationships. Bring them in, give them the best chance possible on your end so that you do the right thing, and then let it go from there. Maybe even try to draw some other people in to get to know them. I don’t like when people do that. I think it’s a form of bullying.