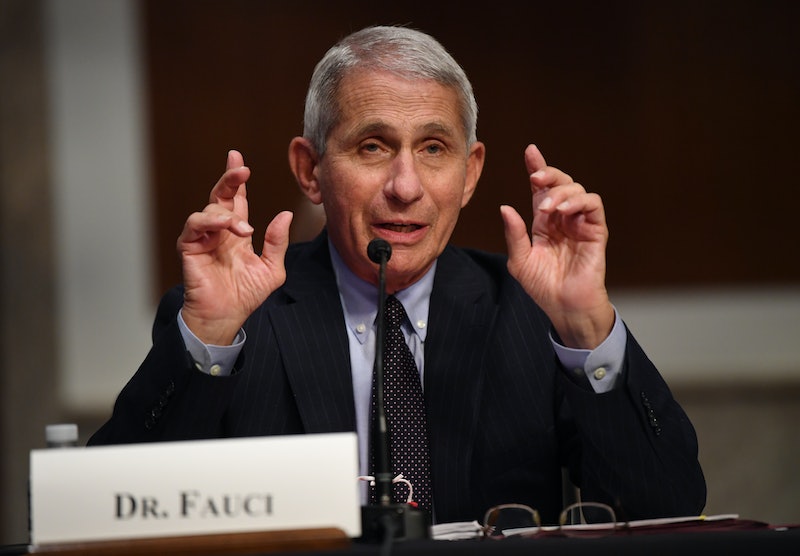 In between keeping the public informed on the latest coronavirus pandemic updates and trying to save the world, Dr. Anthony Fauci reacted to Brad Pitt's Emmy nomination for playing him in an April episode of Saturday Night Live. The doctor and immunologist was asked to share his thoughts on the news during an interview with the Associated Press on Wednesday, and he responded in typical Fauci fashion by acknowledging that it's a "surrealistic" moment for him, but it's not something he's going to be distracted by.

"The only thing I can say, it's somewhat surrealistic," Fauci told the AP. "I don't get distracted by that. I really have to really focus like a laser beam on the things that I'm responsible for. I think that's kind of interesting, it's a little bit strange that that's going on… But one thing for sure: It doesn't go to my head, because I don't pay much attention to it." No offense to Pitt, but Fauci's got a lot of things on his mind.

While the doctor certainly has more important things going on than Pitt's Emmy nomination right now, the actor should still share the award with Fauci if he takes home the trophy for Outstanding Guest Comedy Actor in September. After all, the Director of the National Institute of Allergy and Infectious Diseases is responsible for the Hollywood star landing the role in the first place. In April, CNN's Alisyn Camerota asked Fauci who he would like to see play him on SNL during an episode New Day, and the 79-year-old was quick to suggest Pitt.

During his appearance on SNL, Pitt as Fauci skewered Donald Trump's coronavirus response, but he also took a moment at the end of the sketch to thank the real doctor for all of his work. "To the real Dr. Fauci, thank you for your calm and clarity during this unnerving time," Pitt said. He then went on to also express his gratitude to all of the medical professionals and first responders putting their lives on the line to help others during the pandemic.

After Pitt made Fauci's SNL dreams come true, the doctor praised the performance during an interview with Telemundo's Un Nuevo Dia. "I think he did great," Fauci said. "I mean, I'm a great fan of Brad Pitt, and that's the reason why when people ask me who'd I like to play me I mention Brad Pitt because he's one of my favorite actors. I think he did a great job."

His "great job" at impersonating Fauci might just earn Pitt a second Emmy (he won his first for The Normal Heart), and if it does, you can bet Fauci will have the perfect response lined up for the occasion.

More like this
Pedro Pascal Barely Got Through The "Lisa From Temecula" 'SNL' Sketch
By Stephanie Topacio Long
Michael B. Jordan Tackled His "Public Breakup" With Lori Harvey On 'SNL'
By Brad Witter
Who Is Pete Davidson Dating? He & Chase Sui Wonders Got Caught Kissing
By Jake Viswanath
Ashton Kutcher Wants Danny Masterson “To Be Found Innocent” In Rape Retrial
By Jake Viswanath
Get Even More From Bustle — Sign Up For The Newsletter
From hair trends to relationship advice, our daily newsletter has everything you need to sound like a person who’s on TikTok, even if you aren’t.