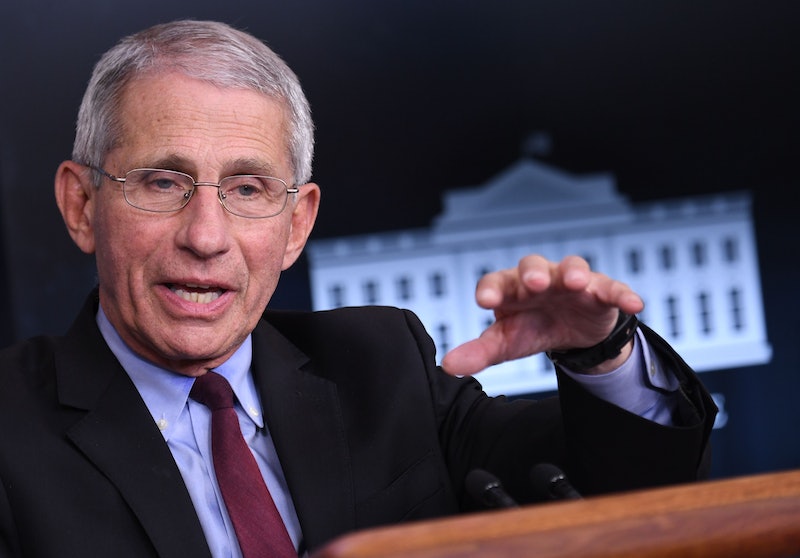 Physician (and the internet’s coronavirus crush) Dr. Anthony Fauci praised Brad Pitt’s Saturday Night Live impersonation of him. A few weeks after Fauci told CNN that he would “of course” choose Pitt to portray him on the NBC sketch comedy series, SNL at Home tapped the Once Upon a Time in Hollywood actor to appear as the physician in a cold open on April 25. And during an interview with Telemundo’s Un Nuevo Dia to discuss the pandemic on April 27, Fauci reacted to the clip, saying Pitt did a “great job.”

“I'm a great fan of Brad Pitt and that's the reason why when people ask me who I would like to play me I mention Brad Pitt," Fauci said. "He's one of my favorite actors. I think he did a great job."

Pitt might seem like an unexpected choice to play Fauci, but it actually makes a lot of sense. In the past month, Fauci has emerged as a fact-based guiding force amid Trump’s daily coronavirus briefings that often err on the unpredictable. And, on top of leading government research within his role as director of the National Institute of Allergy and Infectious Diseases, Fauci has also become the subject of collective thirst on the internet as users create fan accounts and a petition to name him PEOPLE’s “Sexiest Man Alive.”

Speaking with Telemundo, the physician and immunologist also thanked Pitt for his heartfelt message at the end of the sketch. “I think he showed that he is really a classy guy when at the end he took off his hair and thanked me and all of the health care workers. So, not only is he a really great actor but he is actually a classy person.”

In the cold open, Pitt addressed the public to combat coronavirus misinformation that has been spread by Donald Trump. Of Trump’s insistence that various “beautiful” tests are easily accessible, Pitt quipped, “I don’t know if I would describe the test as beautiful, unless your idea of beauty is having a cotton swab tickle your brain.” He added, “Also, when he said everyone can get a test, what he meant was almost no one.” Then, for Trump’s infamous suggestion to inject disinfectants into the infected to cure the virus, the skit cut to Pitt’s mouth agape, dumbfounded.

Pitt ended with a message to Fauci and medical workers: “And to the real Dr. Fauci, thank you for your calm and clarity in this unnerving time. Thank you to the medical workers, first responders, and their families for being on the frontline.”