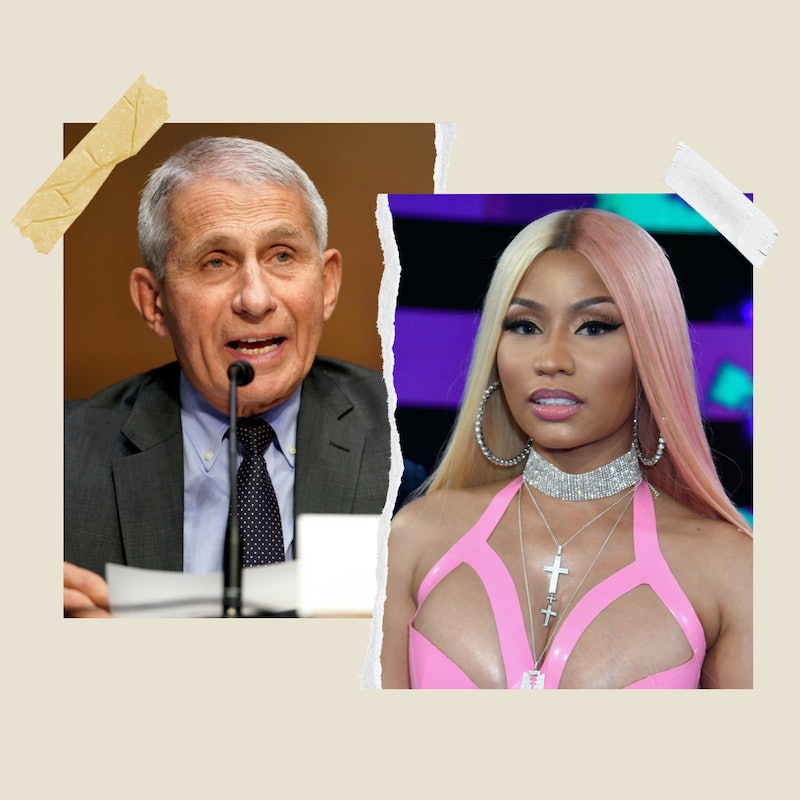 Nicki Minaj caused quite a stir this week when she claimed that her cousin’s friend in Trinidad “became impotent” after getting the COVID-19 vaccine. “His testicles became swollen,” she tweeted on Monday, Sept. 13. “His friend was weeks away from getting married, now the girl called off the wedding.” Now, Dr. Fauci, Chief Medical Advisor to the President, has officially debunked the rapper’s claims, confirming that impotence is not a side effect of the vaccine.

“There’s no evidence that it happens, nor is there any mechanistic reason to imagine that it would happen,” Fauci told CNN on Tuesday, Sept. 14, when asked if there’s any validity to Minaj’s claim that the vaccine could cause male fertility problems. “So the answer to your question is no.” The 80-year-old physician went on to say that there’s a ton of misinformation online that must be quashed. “The only way to counter mis- and disinformation is to provide a lot of correct information and essentially debunk these kinds kinds of claims,” he said.

COVID-19 vaccines have gone through extensive scientific research, and the U.S. Food and Drug Administration has approved several vaccines for public use, including the Pfizer, Moderna, and Johnson & Johnson vaccines. The Centers for Disease Control and Prevention has also been clear that “serious side effects that could cause a long-term health problem are extremely unlikely.” If anything, those who get jabbed may experience pain, redness, and swelling at the injection site as well as tiredness, muscle pain, headache, chills, fever, and nausea. These potential side effects are only expected to last for a few days.

While Fauci doesn’t believe that Minaj had any bad intentions, he feels strongly that the general public should follow the science instead of having their opinions swayed by random vaccine horror stories shared online. “I’m not blaming her for anything, but she should be thinking twice about propagating information that really has no basis, except for a one-off anecdote,” he continued, per Daily Mail. “That’s not what science is about.”

The musician’s tweets about the vaccine were prompted by the Met Gala’s vaccination requirement. “They want you to get vaccinated for the Met,” Minaj tweeted on Sept. 13. “If I get vaccinated it won’t be for the Met. It’ll be once I feel I’ve done enough research. I’m working on that now.” She then encouraged her fans and followers to continue masking up. Unsurprisingly, her tweets were met with a ton of backlash. Among her many critics were Piers Morgan, MSNBC host Joy Reid, and British Prime Minister Boris Johnson.

“I’m not as familiar with the works of Nicki Minaj as I probably should be,” Johnson admitted during a press conference on Tuesday, Sept. 14. “But I am familiar with Nikki Kanani, superstar GP of Bexley who’s appeared many times before you, who will tell you that vaccines are wonderful and everybody should get them. So I prefer to listen to Nikki Kanani.” Morgan, for his part, accused Minaj of “peddling lies that will cost lives” while Reid called for the rapper to “do better.”

Despite getting slammed on Twitter for telling her followers not to get “bullied” into getting the vaccine, Minaj wrote that she’s actually not anti-vax at all. And while it remains unclear whether or not she’ll get jabbed, she wrote that like so many of her fans, she may have no choice. “A lot of countries won’t let ppl work w/o the vaccine,” she tweeted. “I’d def recommend they get the vaccine. They have to feed their families. I’m sure I’ll b vaccinated as well cuz I have to go on tour.”

More like this
Melanie Lynskey Met Her Husband Jason Ritter While Filming 'The Big Ask'
By Alyssa Lapid
'RHOSLC’s Heather & Whitney Are Still On A “Friendship Break” After Season 3 Reunion
By Jake Viswanath
Everything To Know About 'RHOSLC' Season 4
By Jake Viswanath
Vanessa Hudgens Is Reportedly Engaged To Cole Tucker
By Jake Viswanath
Get Even More From Bustle — Sign Up For The Newsletter
From hair trends to relationship advice, our daily newsletter has everything you need to sound like a person who’s on TikTok, even if you aren’t.