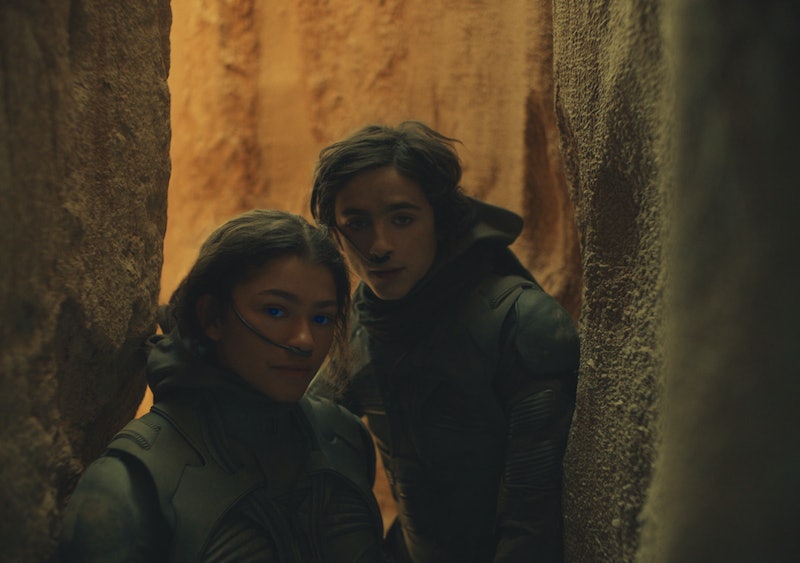 The hype for Denis Villeneuve’s Dune adaptation is well-deserved, but the ending of the film may leave viewers wondering how Paul Atreides’ story concludes. Luckily, Frank Herbert’s classic sci-fi novel has all the answers. Major spoilers for Dune follow.

The world of Dune revolves around a rare spice, called melange. It’s the foundation upon which the intergalactic Corrino Empire has been built. A rare and ultra-valuable commodity, the spice unlocks various talents — such as mental prowess, prescience, and the ability to navigate the deep reaches of space — in the humans who consume it. It’s only found on the desert planet of Arrakis, aka “Dune,” where it’s harvested from the sand by huge mining rigs.

Mining the spice is incredibly dangerous. In addition to the massive sandworms that surface to consume the people and machinery who dare to traverse the desert, the mining operations must also fear the Fremen: people who live in Arrakis’ harshest climes, use the spice in their everyday lives, and oppose the Imperial forces who harvest it and colonize their planet without their permission. It’s into this conflict that House Atreides — led by Duke Leto I, his concubine Lady Jessica, and Leto’s heir, Paul — is thrust.

Villeneuve’s first Dune film only tells part of the story, but what a story it is. The director of Arrival and Blade Runner 2049 did the impossible here: Not only did Villeneuve bring a supposedly un-filmable book to the big screen nearly 40 years after David Lynch’s oft-maligned attempt, but he also turned Dune into an Oscar-lover’s dream. With 10 nominations, including the coveted Best Picture, Dune is one of the best, most ambitious films of 2021.

Here’s what you need to know about the Dune book ending, before Dune: Part Two lands in theaters.

What Kicks Off The Events Of Dune?

As Dune opens, House Atreides is preparing to move from their ancestral home on the planet Caladan to Arrakis. The Atreides’ political enemies, House Harkonnen, have controlled Arrakis and its spice for generations, but now the fiefdom is set to change hands, by order of the Padishah Emperor Shaddam IV. By agreeing to move to Arrakis, House Atreides’ leader, Duke Leto I, knows that he is playing into a trap — but believes he must do so to avoid a war.

The Padishah Emperor was concerned that the Atreides’ royal lineage and well-trained army could threaten his rule, and so he aligned himself with the Harkonnens, who have a long-running blood feud with the Atreides. The ancestors of the Harkonnens’ current leader, Baron Harkonnen, bought their way into becoming a Great House — so the Emperor doesn’t consider the Baron a threat, even though he clearly aspires to usurp the throne.

Although the Duke has made a few powerful enemies, he also has a handful of fiercely loyal allies. Chief among them are the Mentat Thufir Hawat, the Warmaster Gurney Halleck, and the Swordmaster Duncan Idaho — three men who have been Paul’s teachers since his childhood, and who accompany the Atreides to Arrakis.

Additionally, Lady Jessica — Duke Leto I’s royal concubine, and Paul’s mother — is one of the Bene Gesserit. The Bene Gesserit is a secretive organization of women who work as spies and soothsayers, and they’re willing to protect both Jessica and Paul at all costs. Every Bene Gesserit has undergone extensive training in subterfuge, and is able to exert astounding control over body and mind — both her own and those of her targets. The Bene Gesserit have long been allied with both the great houses and the Emperor himself, but they serve their own goals: namely, the production of their messiah, the Kwisatz Haderach.

What Is The Kwisatz Haderach?

The Reverend Mothers of the Bene Gesserit share a psychic connection with all who have come before them. Unlocked by taking a powerful drug available only on Arrakis — one that would kill anyone who was not worthy — the Reverend Mothers’ shared genetic memory encompasses many millennia of human history. Because this Other Memory had passed down exclusively through an order of women, however, the Reverend Mothers were incapable of accessing the complete memories of their forefathers. They implemented a top-secret breeding program to produce the Kwisatz Haderach: the son of a Bene Gesserit who would be capable of tapping into the Other Memory.

To that end, Jessica was given orders to bear an Atreides daughter when she became Duke Leto I’s concubine. That daughter would have been betrothed to the heir of House Harkonnen, and their son would have become the Kwisatz Haderach, had no one gone off-script. But, to please the Duke, Jessica had a son, Paul, instead.

Lady Jessica’s defiance of the breeding plan — of which she herself is a product — doesn’t exactly put her and Paul on the Bene Gesserit’s bad side, however. Yes, the Reverend Mother, Gaius Helen Mohiam, does threaten Paul’s life over his mother’s willful actions, and gives him an excruciating test to determine whether he could be the Kwisatz Haderach. Once Paul passes that test, however, the Bene Gesserit resolve to protect him.

What Happens To House Atreides?

Not long after their arrival on Arrakis, House Atreides is overrun by the Padishah Emperor’s personal army, the Sardaukar, who are disguised in Harkonnen livery. The Atreides were sold out by Dr. Wellington Yueh, the family physician. (Dr. Yueh’s professional training was supposed to have made him an unflappable ally. But when House Harkonnen kidnapped and tortured the doctor’s wife, he became hell-bent on revenge.)

Before handing Duke Leto I over to the Harkonnens, Dr. Yueh implants a poisoned tooth in place of one of the Duke’s molars, and instructs him to use it to kill the Baron. Unfortunately, things do not go according to plan, and the Duke only succeeds in killing the Baron’s Mentat before he himself succumbs to the poison.

How Do Paul & Lady Jessica Survive On Arrakis?

After the Duke is killed, the remains of his once-grand house are scattered to the winds. Lady Jessica and Paul survive by donning stillsuits — full-body coverings worn by the Fremen that recycle the body’s water — and fleeing into the desert.

They have reason to believe that the Fremen will take them in. The Atreides have spent their time on Arrakis attempting to curry favor with the Fremen. And the Bene Gesserit have also long targeted marginalized communities, including the Fremen, with a gospel that spreads a version of the Kwisatz Haderach story. This softens those communities for Bene Gesserit manipulation.

Paul and Jessica soon come face-to-face with Stilgar, the man who leads the Fremen settlement known as Sietch Tabr, and who has been told of Paul’s abilities by a mutual ally. Jessica leverages her Bene Gesserit training to convince him to let her join the sietch, and become its new Reverend Mother.

Meanwhile, Paul proves himself to be a worthy fighter by overtaking a member of the Fremen, Jamis, after he threatens Jessica. Although Paul does not wish to kill his challenger, he soon realizes that their match-up is meant to be a duel to the death. Paul kills Jamis, winning his water, material possessions, and widow in the process. Fremen law dictates that Paul must take Jamis’ widow as either a servant or as a wife for one year following her husband’s death, and he chooses to keep her as a servant. He finds love instead with Chani, a well-respected member of Sietch Tabr.

How Does Denis Villeneuve’s Dune End?

Villeneuve’s Dune ends at a key moment of transformation for the young Paul. Paul’s duel with Jamis (Babs Olusanmokun) proves to be his coming-of-age ritual; his pampered life as a duke’s son officially comes to an end. By choosing to end the film with this duel, Villeneuve leaves the door open for a second Dune movie.

What About The Dune Book Ending?

The events of Dune all lead up to the Arrakis Revolt, in which the Fremen wrest control of the planet back from the Padishah Emperor, and House Corrino’s time as the ruling dynasty comes to an end. A lot of pieces must fall into place for that to happen, however.

First, there’s Lady Jessica’s transformation into a Reverend Mother. She survives ingesting the drug needed to connect her to the Bene Gesserit’s ancestral memory — but the process awakens her unborn daughter, Alia, who was conceived shortly before the Duke’s death. Paul’s sister is born already able to access the Other Memory, making her a formidable threat to her enemies, but ostracizing her from both Fremen and Bene Gesserit societies.

Paul, Lady Jessica, and the Fremen must train for war to prepare for their attack on House Harkonnen and the Padishah Emperor. Paul learns to ride the sandworms of Arrakis as the Fremen do. He and his mother train Fremen combatants in Bene Gesserit combat styles. They also reconnect with Gurney, who joins them in the fight. With all this in place, the Fremen’s attacks on Harkonnen mining vessels become much more effective.

There’s one final step for Paul, however. He has seen the powers he acquired from training with Thufir and Jessica grow exponentially, due to his now-constant exposure to the spice. In a bid to achieve his full potential, he ingests the drug that Jessica took to become a Reverend Mother, which has killed every man who ever attempted it. Paul falls into a coma and wakes just in time to warn the Fremen that the Sardaukar are mounting a counter-assault against those who ended their spice harvest. When the Sardaukar’s attack on Sietch Tabr has ended, Paul and Chani’s infant son is dead, and young Alia has been kidnapped.

Led by Paul, the Fremen then launch a massive attack against Arrakis’ capital city, using the sandworms and the planet’s own weather against the Padishah Emperor’s forces. Following the Emperor’s surrender, Paul kills the Baron’s heir in a duel, finally settling the score between their houses.

In the midst of the assault, Alia seizes her chance to kill Baron Harkonnen — who is revealed to be Lady Jessica’s biological father — and then “doing,” as Paul tells his mother, “what any good Fremen child should be doing in such times... killing enemy wounded and marking their bodies for the water-recovery teams.”

With his enemies out of the way, Paul becomes the new Padishah Emporer. His first political move is to marry the former emperor’s daughter, Princess Irulan, who will become the ultimate historical authority on all things related to her husband.

Although it hurts Chani to see her partner marry someone else, Paul promises her that he will never consummate his marriage to Irulan — a statement Chani doubts to be true. The novel ends with Lady Jessica, the royal concubine turned Reverend Mother, who never became Duke Leto I’s wife, remarking on the state of her son’s marriage:

“Do you know so little of my son?” Jessica whispered. “See that princess standing there, so haughty and confident. They say she has pretensions of a literary nature. Let us hope she finds solace in such things; she’ll have little else.” A bitter laugh escaped Jessica. “Think on it, Chani: that princess will have the name, yet she’ll live as less than a concubine — never to know a moment of tenderness from the man to whom she’s bound. While we, Chani, we who carry the name of concubine — history will call us wives.”

And so Frank Herbert’s Dune ends, not with some profound words from the wizened Paul, but with a message of kinship and power among the women of his world.

More like this
The 'Firefly Lane' Book Ending Teases Way More Tears To Come In 2023
By K.W. Colyard
The 'Love, Lizzo' Harry Styles Scene Is Just 1 Moment That Made Fans Feel Seen
By Brad Witter
This Classic Movie May Be Key To Figuring Out Who Dies On 'The White Lotus'
By Grace Wehniainen
The 'Lady Chatterley's Lover' Book Leaves Us With A Troubling Question
By Catharina Cheung
Get Even More From Bustle — Sign Up For The Newsletter

This article was originally published on Oct. 21, 2021