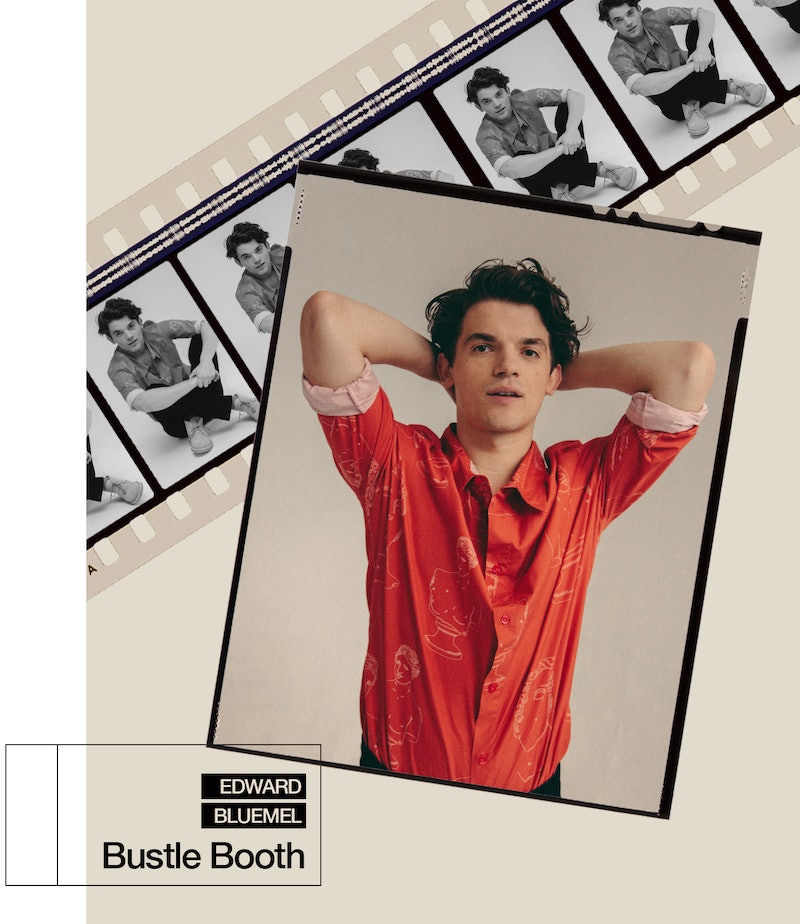 While some actors have always known they wanted to be on screen or on stage, Edward Bluemel says that wasn't the case for him. “I wanted to be a fishmonger," he tells me, deadpan. "I really love fish, not just eating it, but looking at it as well. I can often be found at the fish counter in the supermarket,” he continues. Not a role I would have necessarily predicted, but definitely in line with the slightly edgy, comedy niche that Bluemel has carved out for himself in the acting world. He reminds me of that friend you always want to have a pint with, never sure where the night will take you once you get started.

Over the last few years, Bluemel has appeared in several hit series, including Sex Education and Killing Eve. And later this year, we'll see him return to Sky’s A Discovery of Witches, playing vampire-cum-doctor Marcus Whitmore, a member of one of the most established families in the series.

“It's nice to see a vampire written in a way that isn’t what you traditionally associate with vampires," he says of his character. "Even in the teen vampire series they still have such a serious energy. I love the idea that you wouldn’t know anything was different about Marcus. He’s fighting the tropes.”

The vampire is massively different to the other characters Bluemel has played, and rather than working towards one dream role he says he enjoys taking on projects that switch things up. In Sex Education, for example, he played Sean, the rebellious brother of lead character Maeve Wiley (Emma Mackey) who the viewer meets part way through season one.

Was working on Sex Education as much fun as it looked? “I was only there for a couple of weeks, but it was so clear on set that something quite special, and different to anything before, was being created,” he says. “That show is such a community, they’re all such good friends, and it was a really nice atmosphere to come into, and ride the wave of what they’re doing. As soon as they called action everyone was so funny and comfortable. I'm proud of being part of a show that’s done so well.”

In 2019, Bluemel joined the cast of another brilliantly successful drama, Killing Eve. He played the character of MI6 agent Hugo, who joins Eve's team to help with her investigations. The epitome of nepotism and privilege, Hugo is initially set up as a character to dislike, but at the series progresses, it's hard not to fall for his charms.

Working alongside the sensational Sandra Oh (Eve), Fiona Shaw (Carolyn), and Jodie Comer (Villanelle), Bluemel is a fan of what the show stands for, he says. “It put women at the forefront everywhere in the production. Specifically in the spy genre, which people have said is a ‘man’s genre'. That’s why it was so progressive and groundbreaking when it first came out.”

While Bluemel has worked alongside some brilliant actors, he also draws inspiration from much closer to home – living in a house of actors, too. “A lot of people say that sounds like a nightmare," he laughs. "We often audition for the same roles, some of us get close to the same roles. But it never feels like competition, just supportive. It's amazing to be able to watch your friends at work, and to learn from them.”

Friendship is something Bluemel would like to explore more in his future roles. “I think society often shies away from showing deep emotional male friendship on screen, which can lead to men not being able to be open with each other, even when they’re very close friends,” he notes.

Get to know more about Bluemel in his Bustle Booth questionnaire below.

It doesn’t really matter, as long as it makes me anxious for the rest of the day.

London and Borth, a small seaside town in mid Wales. My best friend's parents live there and I like to know they’re warm and dry.

It’s very hard for me to publicly admit this, but I’m a Gemini.

The whole script of A Knight’s Tale (2001). Not overused per se, but an important piece of literature nonetheless.

It’s technically claymation but Pingu still holds up to this day in my opinion. I’ve got it all on Blu-ray.

Strictly. I love sequins and It would be good fun to have a very public and illicit affair with my dance partner.

"Echoes" by Pink Floyd. Some people say that 24 minutes is too long. For me it’s all about telling the story.

More like this
Everything To Know About The 'Daisy Jones & The Six' TV Series
By Maxine Harrison and Brad Witter
Twitter Is Burning As Phoebe Dynevor Reveals Daphne’s 'Bridgerton' Exit
By Sophie McEvoy
Helena Bonham Carter Doesn't Think 'The Crown' “Should Carry On"
By Sam Ramsden
Yes, 'The Price Of Glee' Is Available To Watch In The UK
By Catharina Cheung
Get The Very Best Of Bustle/UK
Sign up for Bustle UK's twice-weekly newsletter, featuring the latest must-watch TV, moving personal stories, and expert advice on the hottest viral buys.