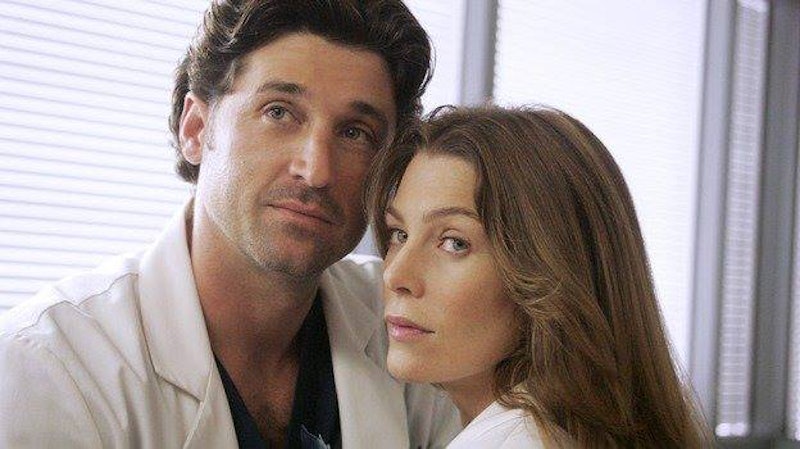 Over the course of 18 seasons and 384 episodes (and counting!), Grey’s Anatomy has delivered countless quotable moments. From “You’re my person” to “It’s a beautiful day to save lives,” the series is filled with lines ready-made for fan merch — the kind of stuff you know by heart and enjoy no matter how many times you’ve watched your go-to comfort episodes on Netflix.

One of the most popular lines to revisit comes from an early MerDer episode: Season 2’s “Bring the Pain,” in which Meredith makes her feelings about their rocky relationship clear. (Remember, at this point, Derek’s decision about whether to be with Mer or Addison is looming over the love triangle.)

“Your choice? It’s simple: her or me,” Meredith tells Derek after a surgery. “And I’m sure she’s really great. But, Derek, I love you. In a really, really big pretend to like your taste in music, let you eat the last piece of cheesecake, hold a radio over my head outside your window, unfortunate way that makes me hate you, love you. So pick me. Choose me. Love me.”

The memorable monologue, especially those last six words, marked a rare moment of vulnerability for Meredith and laid the foundation for MerDer as endgame — even if it took a while to get there. For all its emotion, though, the moment does have at least one hater. And her name is Ellen Pompeo.

During a Nov. 3 episode of her podcast, Tell Me, Pompeo told guest Rachel Lindsay that she was against the scene from the start. “When I read that scene, I was horrified,” she said. “So, I’m gonna beg a man? ... I’m bawling my eyes out, but not for the reasons in the scene. I’m bawling because I was like, I can’t believe that I’m on TV begging a man to love me.”

OK, that’s sure to make you view the scene a little differently, to say the least. Pompeo recently revisited the scene, she explained, when her 12-year-old daughter, Stella, found it on TikTok (where one sound clip from the scene has been used more than 60,000 times) and asked her mom about it.

“My daughter was like, ‘Why did you beg a man to love you?’ And I was like, well praise Jesus that she’s asking me this question and that her head is already in the right place at 12,” Pompeo said. “But, what do I say? And then I was like, ‘I didn’t write that. I didn’t want to do it.’”

Pompeo went on to acknowledge that even though she thought the scene was “terrible,” it’s become one of the most popular moments in TV. “Every woman knows what that feels like. We want the man to pick us. But why? Why do we do that?” she said.

The conversation then pivoted to another long-running ABC franchise: The Bachelor, of course — and Pompeo didn’t hold back. “Why do women go on The Bachelor and put themselves in a situation where there’s a super good chance of you being humiliated on national television? And having some dude, whose pants are way too tight probably, picking some other woman?” Excellent questions...